The Cyanide & Happiness Adventure Game is officially coming to Linux

Now this is some fun news! The Cyanide & Happiness Adventure Game [Kickstarter] is officially heading to Linux as their Kickstarter stretch goal has been hit. 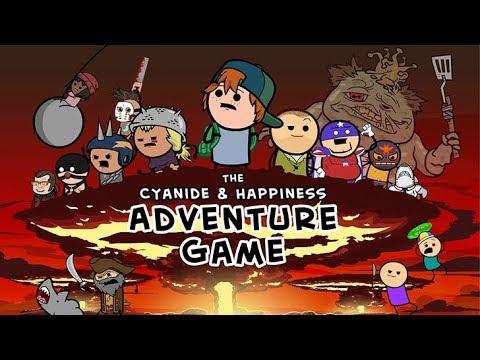 Announced in an update last month, the developers posted the exciting announcement after passing the $450K stretch goal.

At time of writing, they've hit over $565K in funding against their original $300K goal which is impressive. They only have 5 hours left to go, so it's pleasing that it's funded and coming to Linux too!

The game will be a new approach to point-and-click adventures, filled with dark comedy, drama, weirdness, and an apocalypse in the suburbs. This is the first time we're making something set in the unified C&H Universe, so we're completely excited to be making this for you!

As a huge fan of their comics, I think I might enjoy this one. It might be rather old, but this one still gets me. I don't often like comedy adventure games, but something tells me this is going to be a bit special.

As with all Kickstarters, I just hope they don't leave Linux as an afterthought, especially considering they've taken funds in the form of a stretch goal to make it happen.

They aim to release the first chapter by December next year, so it's going to be a bit of a wait. Will you be buying it at release?

Thanks for the tip Zlopez!

Agreed. When a Linux port is a 'stretch goal', it is never made a priority. As much as I would love to back this game, I can't. I'll wait until there is an actual Linux version for sale. (Still fuming about Carmageddon - First backed project on KS).
1 Likes, Who?
Zlopez 5 Oct, 2017

I supported this one, because I love the Cyanide and Happiness comics. I hope they will deliver all the promised features.
2 Likes, Who?
Mal 5 Oct, 2017

I supported all of their previous kickstarters except this one. I like the guys and they always delivered. But they are animators not developers. I welcome their linux "stretch goal" but until I see it done I remain skeptical since it's not really up to them.
2 Likes, Who?

Agreed. When a Linux port is a 'stretch goal', it is never made a priority. As much as I would love to back this game, I can't. I'll wait until there is an actual Linux version for sale. (Still fuming about Carmageddon - First backed project on KS).

Well , if you look closely you can see that also PS4 and Xbox versions are stretch goals.

View PC info
Considering that Linux was a stretch goal from the start of the campaign, and the first port in line for funding, I didn't feel too nervous about their intent to really make one, unlike some campaigns where it's added mid-campaign in a "oh yeah we could make a Linux version too" kind of way. So I backed it and we'll see. At worst I can just ask for a refund.
0 Likes

As an Arch (desktop), NixOS (laptops) and Debian (servers - also using OpenBSD but this is out of topic) user, I don't have that much problems either with Arch or Nix' when it comes to games. Except from the good ol' Unity fullscreen bug, which is solved with a simple line, and some problems on Arch with the desperatly old libgnutls.so library packaged with Steam (which is solved by just deleting it from the games' directory, in order to use the system one). On Nix' it's another matter, as Steam is in a dedicated chroot with "everything it should ever need©". Hated to have had to build the full mono stack from source, tho…

But I do agree on the fact that this kind of distro is more oriented to people who knows (or who want to know and thus pay the price for knowledge) the inners of their operating system and who like tinkering with it ("Oh, a problem? nice! let's solve it!" ). Obviously, people who want an "it just work" solution should head to more user-friendly distros - which is perfectly fine, no elitism intended.

BTW, as a huge fan of Cyanide & Happiness since the beginning… I'll keep an eye on their game. If it comes to Linux, and if it is as cynical and fun than their comics and shows are, they can count me in :)