The developer of Let Them Come [Steam, Official Site], has said that they are looking into a Linux version of this rather fun sounding shoot ‘em up. 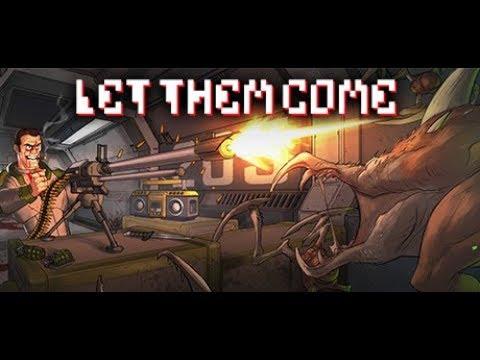 When asked about a Linux version on Steam, the developer replied with this:

I'm looking into it!

If it seems like your sort of thing, if you want to show your support you can do so in this forum post.

Let Them Come is a fast paced pixel art shoot ‘em up. Twitchy trigger fingers and focused battle tactics are the order of the day as wave after wave of alien-like creatures try to take you down. Gameplay is simple to pick up but hard to master - only the best of the best will survive to fight another day. With a variety of alien creatures to mow down and cool weapons to do it with, stylish retro backdrops and a hard rockin’ soundtrack, Let Them Come is a fast and furious pixel style shooter on steroids.

The idea behind the game seems pretty simple, with your character being unable to move, but it does look really quite fun. The style of it is great, with the sweet pixel art style, with a little gore thrown in looks like my kind of game.

Something about it reminds me of the scene from Aliens where the automatic turret is just firing away in the corridor, love it.

Thanks to HexDSL for telling me about it.

View PC info
The screen shakes is a bit extreme but I might pick it up if it comes our way anyway.
0 Likes

View PC info
The effects and lighting look rad. Music is cool too. +1 would buy :-)
0 Likes

View PC info
I also bothered the developer on Twitter about it, so hopefully the game will come to Linux at some point :)
0 Likes

Honestly though, i played it on stream the other evening using wine. it ran fine but the twitch integration was busted in wine.

game is VERY fun takes a lot of effort and planning for what is essentially a very simple game. got a real 'aliens' vibe to it and a full campaign. also a score challenge mode that is quite the challenge indeed.
0 Likes
While you're here, please consider supporting GamingOnLinux on: