Kynseed [Steam] is a 2D sandbox RPG that looks absolutely gorgeous and the developer is open to a Linux version if there's enough demand. 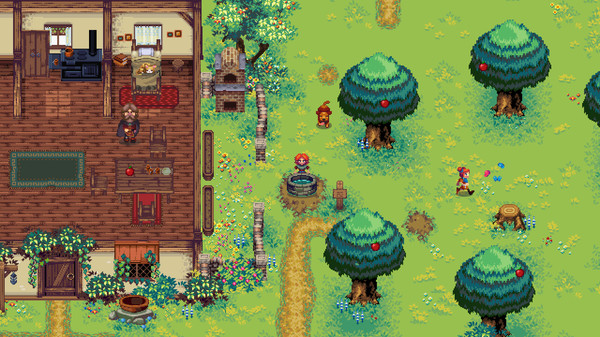 To be clear, they said they have no current plan, but they said "if the demand is there" for a Linux version they will "look at that down the line". I appreciate that's nothing solid, but as someone who loves RPGs I would love to see it on Linux.

Kynseed is a sandbox RPG adventure life sim brought to you by developers who worked on the Fable series for Lionhead Studios.

Live your life in a quirky world where everyone ages and dies, including your pets! Take control of the mystical Kynseed and grow your family legacy over generations as you pass your skills and powers down to your children.

You can post in this Steam forum thread if you would buy a Linux version.

View PC info
Protip for devs: There's ALWAYS demand for Linux builds. It's not an indicator of how well it will sell.

Quoting: rustybroomhandleProtip for devs: There's ALWAYS demand for Linux builds. It's not an indicator of how well it will sell.

Correct. However, I still think it's a nice idea to show developers who want a little push that there is some form of demand.
3 Likes, Who?

Ardje 8 Mar, 2018
View PC info
I used to have an agreement with a local software shop. I told them to sent me 1 linux game every month that they didn't sent me already, whatever the price.
It was an easy agreement, and it dried up pretty quickly without me loosing significant money.
These days it's hard. I have to make choices. I wish steam had budgeting helpers. I can afford 100 euro a month, and it should just auto-select from my wish list the games that are appropriate for my budget.
But I have to choose everything by myself these days, so I stopped buying :-(.
There is so much I still want to buy, but I am limiting my buying but then I feel bad for those that I did not buy.
It's hard to be a satisfied linux gamer these days :-(.
0 Likes

View PC info
This is a game I'd probably buy, but...honestly? I don't feel like begging Indie developers for a port anymore. That's so 2010. Beggars can't be choosers, but in the Indie segment we're blessed with so many ports these days, that I go "Ok, if you want me to buy your game, offer me a Linux version. Otherwise I am going to buy someone else's!"

I might beg if you're Bethesda. Otherwise...probably not.
2 Likes, Who?

I always search games forums and +1 whenever I see a game I want on Linux, and Kynseed didn't have a thread for it so I started one. In hindsight, I should have included "Linux" in the title, but it seemed to have gained enough traction, I guess.
2 Likes, Who?

Quoting: rustybroomhandleProtip for devs: There's ALWAYS demand for Linux builds. It's not an indicator of how well it will sell.

Correct. However, I still think it's a nice idea to show developers who want a little push that there is some form of demand.

To play devils advocate to this statement, the fact THIS site even exists should show developers there's "demand".

Truthfully, though... I generally feel insulted when developers "wait to see if there's demand". This kinda statement suggests to me that they REALLY DON'T WANT TO, buuuut, if they claim they're "thinking" about it, and never do, then they can simply blame US for the lack of a port. "Oh gee, I was really thinking I WOULD develop a Linux version, but, but, the community didn't DEMAND it, sooo... what's a poor little developer like me to do?!" Pfft.

I have far more respect for developers that either say "we don't have the funds" or "we'll revisit Linux after the initial release" or even "we have no plans for Linux right now". At least the onus is on THEM and they're generally upfront about their intent.