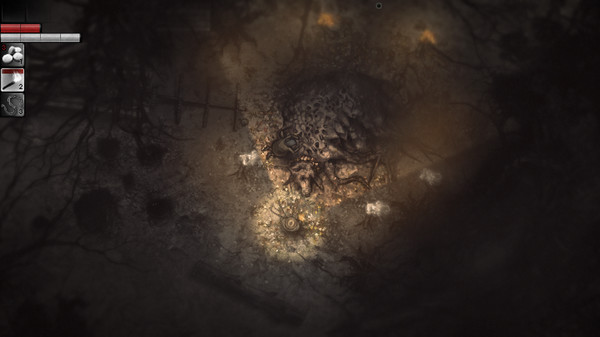 Massive respect to the developers of Darkwood [Official Site, Steam, GOG]! They've released a news post about how things have gone for them and inside is a link to an imgur post, containing a little story and a free torrent if you can't afford the game right now.

Here's what they said

Steam lets you refund a game if you haven't played it for more than 2 hours, and as a developer we can see the reason why people refunded it. When we read the explanation from someone who wrote that he needed the refund because he didn't want his parents to be stressed out when seeing the bill at the end of the month... well, it made us feel quite bad.
So we decided to do something about it! If you don't have the money and want to play the game, we have a safe torrent on the Pirate Bay of the latest version of Darkwood (1.0 hotfix 3), completely DRM-free. There's no catch, no added pirate hats for characters or anything like that. We have just one request: if you like Darkwood and want us to continue making games, consider buying it in the future, maybe on a sale, through Steam, GOG or Humble Store. But please, please, don't buy it through any key reselling site. By doing that, you're just feeding the cancer that is leeching off this industry.

Here's the torrent link. However, it's only for the Windows version currently. If you do use that (dual booting?), I urge you to support the developer with a purchase in future, they seem worthy of the support.

Credit to wolfyrion for posting it in the forum.

We do often include affiliate links to earn us some pennies. We are currently affiliated with GOG and Humble Store. See more here.
About the author - Liam Dawe
I am the owner of GamingOnLinux. After discovering Linux back in the days of Mandrake in 2003, I constantly came back to check on the progress of Linux until Ubuntu appeared on the scene and it helped me to really love it. You can reach me easily by emailing GamingOnLinux directly.
See more from me
Some you may have missed, popular articles from the last month:
The comments on this article are closed.
61 comments
Page: 1/7»

The bundle sites like Bundlestars, Indie Gala, Green Man Gaming, Humble Bundle, etc. do. But there are sites that specialize in users reselling their keys that have lots of fraud.
0 Likes

View PC info
I never thought it that way publishers prefer to get pirated than you to buy from g2a or kinguin. Sometimes I buy a few keys from g2a because other sites they simply don't like my money I use a visa debit card and argentinian currency is banned in some sites. Some sites will ban currency exchange from ARS to USD or EUR, or whatever. Is the price I've got to pay for living in unstable country with 30 per cent of inflation, my money is worth nothing so I'm lucky that g2a takes my money.
1 Likes, Who?
LaughingBear 25 Aug, 2017

I was on the fence about purchasing, but this has helped me make up my mind. Buying this now.
10 Likes, Who?

maxRunner 25 Aug, 2017
View PC info
I read this and immediately purchased it on steam. I can't afford to do it with every game, but these guys deserve it.
12 Likes, Who?

You might want to take a look at this:
https://www.gamingonlinux.com/articles/buy-games-from-g2a-you-should-just-stop-already-tinybuild-lost-out-on-approx-450k-of-sales.7468
There have been a few more recent articles showing some change in that respect, but the problems with key resellers in general still exist, so that article is as relevant today as it was back then....
3 Likes, Who?

View PC info
The torrent seems to be Windows only :(
2 Likes, Who?

View PC info
Developers like to point the finger on users. But this is actually a steam problem, steam is suppose to by the solution for the middle-man problem. If there is something I learned from reading the linux kernel mailing list, is that you never take it on users.
0 Likes
TheRiddick 25 Aug, 2017

View PC info
Half the YT gamers support G2A and embed ads to them, the other half think their the spawn of Satan. Honestly you can't win, I will use G2A if I miss a special on something, and from what I have seen most games are fine on G2A its just a few developers that get hit with credit-card fraud and charge backs.

IMO those keys should be forcibly invalidated and then G2A will need to provide a new key, this is doable if you pay via paypal because there are big repercussions if they don't deal with it correctly.
0 Likes

View PC info
I tell you this, I'm from a country where almost nobody can afford games, even at ~3$ or something like that (you can guess the crappy country I'm at)... But as soon as I can (a couple of months or less), I'll pay for this game, hopefully full price and not on a sale... or even better, they could sell it directly from their site and get a better chunk of the money. I'll see what's the best way to thank those guys for such a humbling decision!... As Liam said, massive respect for the developers!
4 Likes, Who?
1/7»
While you're here, please consider supporting GamingOnLinux on: