The free to play MMO 'Tale of Toast' has launched, with some major scaling issues

If you're like me and you want to see more MMOs on Linux, you might have been excited to try Tale of Toast [Steam], sadly they've had a rough start. 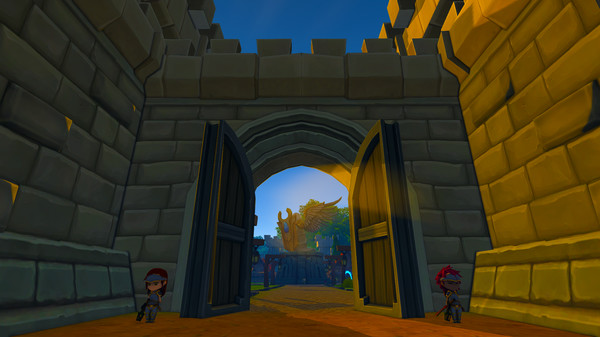 Much like the initial full launch of Albion Online, the servers for Tale of Toast have been completely overloaded. Naturally, there's a lot of upset gamers out there, some of which have waited for hours to still not get in.

This happens often with launches of new MMOs and it still surprises me when it happens, developers never seem to prepare enough resources for the early influx. They didn't seem to have any sort of queue system ready for it, although they do have one now. The problem is, unless it irons out soon they will struggle to pull people back in.

Testing it myself today, I sat in a queue for 19 minutes and it bounced between telling me the server was full or giving me a random time. Eventually it just stayed still telling me it was just full, so it seemed rather pointless to continue waiting to gather any impressions.

Not good, but it's Early Access so hopefully they will continue to optimise and get the situation under control. For now though, it really is best to avoid it until the situation calms down—don't waste your time.

View PC info
i managed to play a bit, but there were huge lagspikes and the controls were super bad, as well as animations. I understand that its a small team or even 1 developer doing this, but sadly it feels more like some cheap mobile game. couldn't stand it more than 10-15 minutes
3 Likes, Who?

View PC info
I want to check this out eventually as both of the guys worked at blizzard. Just waiting for the dust to settle...
1 Likes, Who?

View PC info
From what I read, it is not financially viable to rent too many servers for initial influx of players. I don't like it, but when this are writing big companies (I think in this case it was Blizzard) then it's logical small studios can't handle it much better.
1 Likes, Who?

View PC info
I played some in alpha, and i managed to play until level 6 today after a 30 minutes queue (this weekend was like 1hour+ and crash...).

It's very Alpha, the skill trees are really lacking fun and are not complete, balance is an issue, quests are worthless (gain 20 XP after killing 10 mobs that give each more than the quest).

It has something, some charisma, and if the devs manage to do a good Early Access, it will probably be a very nice MMMOG.

Also, beside the cute kidish feel, it's actually quite hardcore with full PvP passed the first villages, loot lost, some XP and some money drop on death.
1 Likes, Who?

View PC info
Not my cup of tea, and it will probably die soon enough anyway. MMOs tend to be utterly boring unless they can draw in a few hundred thousand players and I can't see how a cheap Indie production would ever be able to pull that feat off. Particularly one that seems to be an equal opportunity offender in combining infantile art with hardcore gameplay. What target audience is that sort of game even aimed at?

MMO devs these days seem to be obsessed with this strange notion that old-school MMOs were somehow better, when they in fact appealed to a tiny fraction of MMO players. Most present day MMO players wouldn't have touched Ultima Online or Everquest with a ten foot pole. And yet they bring back all these hardcore features that died for a reason.

I guess I will just continue playing GW2 and Star Trek Online in WINE. The good thing about nobody making a good MMO anymore is that all existing major MMOs run quite flawlessly in WINE. \o/

View PC info
On the topic of MMORPGs, I have been trying to enjoy one called Ryzom though it ultimately feels like a chore simulator. And playing with others vs alone doesn't seem to change that. Either I have been spoiled by this decade's open world games or the MMO concept itself just hasn't aged well. MMORPG developers need to simplify simplify simplify.
0 Likes
Klaus 28 Feb, 2018
View PC info

Quoting: Kimyrielleappealed to a tiny fraction of MMO players. Most present day MMO players wouldn't have touched Ultima Online or Everquest with a ten foot pole. And yet they bring back all these hardcore features that died for a reason.

I wanted to refute your claim, because I remembered fun evenings of making Wizards hats for pushing my Tailoring skill. Then I repeated that thought and dropped the "refuting" part >_<

This kind of thing stops being fun once free-time is a bigger premium than the monetary price of a new game.
0 Likes

Quoting: GustyGhostOn the topic of MMORPGs, I have been trying to enjoy one called Ryzom though it ultimately feels like a chore simulator. And playing with others vs alone doesn't seem to change that. Either I have been spoiled by this decade's open world games or the MMO concept itself just hasn't aged well. MMORPG developers need to simplify simplify simplify.

I felt the same way about Ryzom. The whole thing is way too technical and non-intuitive, which holds you back from having actual fun. If they'd simplify the skill systems, streamline the HUGE walls of text that new players have to read to even understand the world and its factions, and focus on immersion more than systems, it would be a far better game.
0 Likes
While you're here, please consider supporting GamingOnLinux on: