The Fun Pimps have released a new experimental build of their survival game 7 Days to Die, with it some new options you can tweak to get a much better experience.

It's no secret that 7 Days has been a bit of a system hog, it hasn't historically performed well but they're finally making progress on that front. With the "Alpha 17.4 Experimental B4" release put out a few days ago, it now allows you to disable SS Reflections and that one single option makes it perform much nicer while off (and it still looks good).

Doing my own tests, turning it off gives an instant boost of 10-20FPS depending on where you are and what you're looking at. Times where it would often dip down hard to 40FPS and below, are now mostly for me sitting around 55-60FPS and the way the game feels is a huge amount smoother. Thanks to that, I've been able to give it a run on High settings and have a very smooth ride. 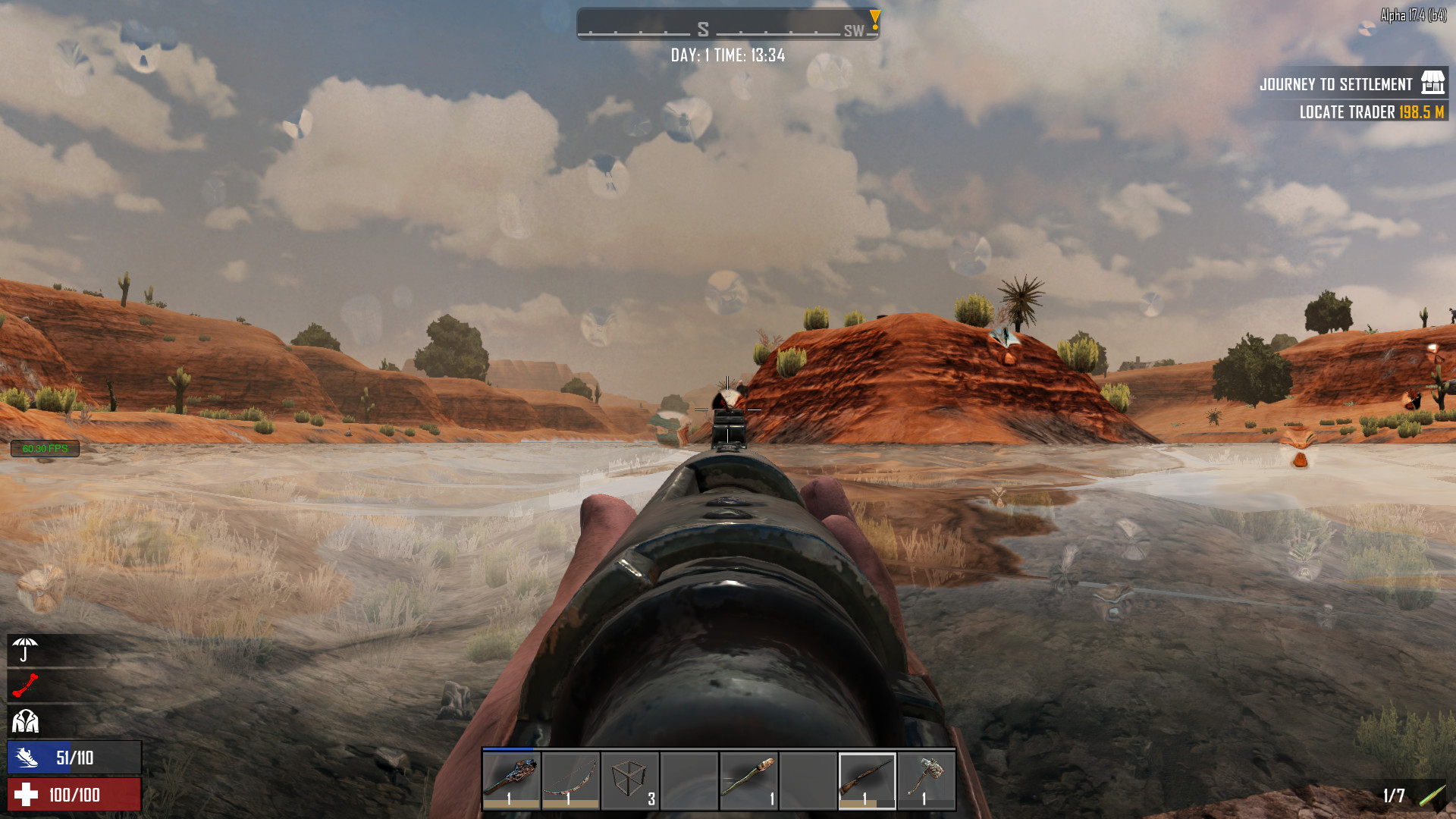 This experimental release also adds in the ability to let you turn off Bloom, a new Medium shadow distance option with Low reduced to faster values, an Ultra graphics preset along with Medium and High seeing adjustments, trader opening times should be fixed and an Automove console command. They've also fixed numerous bugs as well like a nasty memory leak causing crashes, explosion kills not giving XP, Molotov burning kills only giving XP for the first enemy and so on.

As for the next major version of 7 Days, Alpha 18, they've already confirmed a lot of new content is coming. There's going to be a bunch of new weapons like the M60 Heavy Machine Gun, Double Barrel Shotgun, C4, Taser Baton, a Junk Turret and more. We're also going to see higher resolution item icons, new desert textures and terrain, a dynamic music system, an overhaul to the Book system to permanently unlock perks and loads more.

It sounds like both 7 Days to Die Alpha 17.4 and Alpha 18 are going to be some great steps forward for this survival game. Hope to see even more focus on the performance during the Alpha 18 development cycle, still plenty of areas that do need improving.

You can find your own copy of 7 Days to Die on Humble Store and Steam. If you wish to try the current experimental, it's an opt-in beta on Steam, no password needed.

View PC info
In order to keep constantly above 60fps (~80+) in general I need to run the Windows build through proton because the Linux build is lagging massive performance optimizations o.o I would not call it "running nicely"
0 Likes

Quoting: Vortex_AcheronticIn order to keep constantly above 60fps (~80+) in general I need to run the Windows build through proton because the Linux build is lagging massive performance optimizations o.o I would not call it "running nicely"

My testing was done on the latest experimental, and as said, for me it does run nicely with the noted tweak.

"Nicely" is subjective of course, like any time I talk about my own experience with something. In this case, I stand by what I said with it set on "High", with one thing turned off keeping me mostly at 60FPS - that is nice to me.

View PC info
Vulkan still not working yet, for myself at least.
I get a pink and black world.
0 Likes

Quoting: stud68Vulkan still not working yet, for myself at least.
I get a pink and black world.

Yep, their Vulkan build is still borked on Linux. No idea what the issue is, but it's pink and black for me too, although weirdly, the toolbar and compass/map display over it perfectly. Presumably some kind of shader-related weirdness.

I can also confirm that this ss setting punts my performance back into the 65-100fps bracket on my 1080. Before, it was typically in the 45-75 region. And apart from an ever-so-slightly brighter world, I couldn't see what turning off ss actually did!

Loving A17.4 right now - such a lot of fun once you get to grips with how many houses are now absolute death traps! :)
2 Likes, Who?

Quoting: liamdaweMy testing was done on the latest experimental, and as said, for me it does run nicely with the noted tweak.

"Nicely" is subjective of course, like any time I talk about my own experience with something. In this case, I stand by what I said with it set on "High", with one thing turned off keeping me mostly at 60FPS - that is nice to me.

Yes of course you're totally right :D A few years ago 30fps was for me "nice" but that was caused by the very low end hardware I had back then :D


The last time I tired the Linux build was with the latest Alpha 17.3 builds and the performance was not as good as with the windows build running through proton o.o. The new one is still up to be tested for me :D

Quoting: stud68Vulkan still not working yet, for myself at least.
I get a pink and black world.

Yes the VK build are all broken on any OS.

The Linux build how ever was the only one which ever started for me and causes pink textures and heavily distorted 3d meshes :D

View PC info
Just tested for an hour and now I can play on Ultra preset smoothly at 50fps.
Call me impressed. Last build 30fps of stuttering mess.
All on my ageing Fx8350 and 290x.
2 Likes, Who?

It used to, I haven't run it in a while though.
0 Likes

View PC info
I run most games at low-mid setting with 60 or more FPS (e.g. Overwatch). But not 7dtd, it was awful. On lowest settings 30-40 with common drops to much lower numbers. I really hope they fixed this now, because I don't consider unstable 30FPS being playable (same issue with Grim Dawn).
0 Likes

Quoting: GuestI tried telling the Fun Pimps about this but didn't hear back. Please everyone tell them so that they can make sure this issue which looks seemingly easy to fix is on the roadmap and gets fixed.

If it was that easy to fix it would have been fixed by now ;)
(More precisely it would have never been an issue, I wanted Vulkan to be fully supported from the start on with A17, but I'm not a shader guy :( )