The Linux Port Of Age Of Wonders III Is Progressing, A Bit Too Explosive Right Now 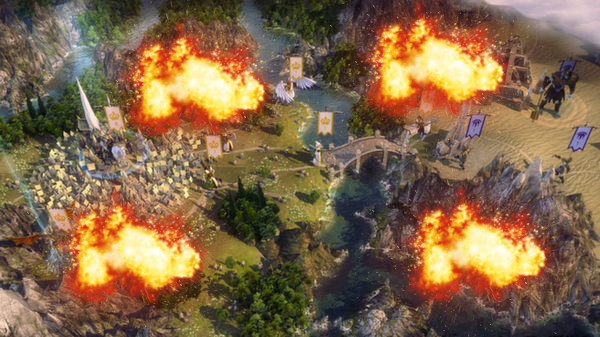 Age of Wonders III is confirmed to be heading to Linux, and it has seen more activity on the SteamDB, but the developer has noted the Linux build is a "bit too Michael Bay at the moment". Hah!

For those that don't know, Michael Bay is a director who loves his explosions, so it means the Linux version is a bit unstable right now, but it is coming!

When pointing out the new activity on the SteamDB page with there now being a Beta section for Linux, the developer said this:


sikbok, DeveloperBuilds are a bit too Michael Bay at the moment for Beta testing, but progress is being made

It looks like the Linux Beta for Age of Wonders III really isn't all that far off, and I cannot wait.

About the game
Age of Wonders III is the long anticipated sequel to the award-winning strategy series. Delivering a unique mix of Empire Building, Role Playing and Warfare, Age of Wonders III offers the ultimate in turn-based fantasy strategy for veterans of the series and new players alike!

It has "Very Positive" reviews on Steam, so if you trust user ratings (they are usually a good indicator), then once it's out (not before) for Linux be sure to pick up a copy. Article taken from GamingOnLinux.com.
Tags: RPG, Strategy, Upcoming
0 Likes
Share

We do often include affiliate links to earn us some pennies. We are currently affiliated with GOG and Humble Store. See more here.
About the author - Liam Dawe
I am the owner of GamingOnLinux. After discovering Linux back in the days of Mandrake in 2003, I constantly came back to check on the progress of Linux until Ubuntu appeared on the scene and it helped me to really love it. You can reach me easily by emailing GamingOnLinux directly.
See more from me
Some you may have missed, popular articles from the last month:
The comments on this article are closed.
14 comments
Page: 1/2»
Teodosio 19 Jan, 2015

View PC info
I'm glad they're making progress on this port, I'm not a big fan of turn based strategy games but always had a certain attraction towards the Age of Wonders games and already own the entire series.

I appreciate their effort, this is going to be one of my most played games this year.
0 Likes

View PC info
Unfortunately, I already bought this in windows some months ago. But I'm at least waiting with installation & gaming until the Linux version arrives. (not sure if that makes any difference as far as the sales-statistics are concerned though....)
0 Likes
FutureSuture 19 Jan, 2015

View PC info
Cannot wait for this! I absolutely will not buy it until it is on Linux, however.
1 Likes, Who?


Hmm...... A bit too much substance in that still, and it's not shaky/blurry enough. I can actually tell what's happening. Plus, it's not ruining something that I loved as a child. I'd have to give it a score of Peter Jackson out of Michael Bay.
2 Likes, Who?

Quoting: FeistUnfortunately, I already bought this in windows some months ago. But I'm at least waiting with installation & gaming until the Linux version arrives. (not sure if that makes any difference as far as the sales-statistics are concerned though....)

I'm having trouble finding the official line, but basically the platform attribution for the sale is decided in the first week. If you buy it on Mac or Linux it is assigned to that platform (anywhere else defaults to Windows). After a week it will look at what platform you have installed it and played it on the most. If you haven't installed it or played it, the sale platform is used.

It's important to know that while the sale platform is important (see: very important), the platform that the game gets played on is also important. Lets say you're like me and bought AoW3 when it was first released and have been playing it on Windows (this was before there was a suggestion that they would be doing a port). Once the game is out for Linux it will be important for me to actually play the game in Linux because those stats are being collected too. They will be able to see people who have switched over to using Linux as a platform, which will help them with future decisions to support the platform.

I have also put off buying the DLC until the Linux release, which will help reinforce my support of their support for my platform of choice.
0 Likes
Aryvandaar 19 Jan, 2015

View PC info
I will definitely buy this when it comes for Linux. :)
2 Likes, Who?

My wallet is waiting patiently. :)
0 Likes


It's the same explosion 4 times over :-( had expected some rotations and/or mirroring at the very least!
0 Likes
1/2»
While you're here, please consider supporting GamingOnLinux on: