The Linux version of Yooka-Laylee on Steam was removed, requiring you to use a beta

I have no idea what's going on with Yooka-Laylee on Steam, but it seems the Linux and Mac versions were somehow removed requiring you to opt into a beta to play it. 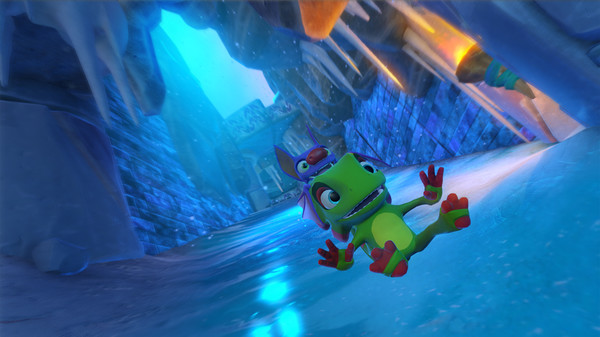 The problem has been around since late December, with the publisher Team17 Digital Ltd putting up a beta for Linux and Mac gamers to be able to still play the game. They say if you opt into the "mac_and_linux_old" beta you will get access again, however, it's not clear how old that build actually is. You can see their post about it here in the Steam forum.

I did message Team 17 a few days ago, but they did not reply to my request to find out what happened and why they can't just put the versions back up as normal. They have now put this message up on Steam ~18 hours ago:

[…]I am sorry for the delay in getting back to you. The team are investigating this issue and as soon as there is an update we will inform you.

If you have any other issues, please get back to us as soon as possible.[…]

It's pretty crazy that they updated the Windows version, while somehow completely removing the main builds for Linux and Mac and for some reason it's taking them nearly a month to fix this. This is quite poor support from Team 17 and Playtonic Games.

We've had a few people email in about it, so hopefully this will highlight the fact that you can still play it on Steam, you just have to opt into the "mac_and_linux_old" beta to do so.

View PC info
I'm interested by this game, does it work well on Linux?

Quoting: legluondunetI'm interested by this game, does it work well on Linux?

At least the version from GOG has been a real blast and very smooth experience. No problems whatso ever and it seems like they fixed a lot of the initial complaints.
I do recommend immediately to switch the audio to short speech, the regular is really annoying to listen to.
2 Likes, Who?
Holycoitus 16 Jan, 2018
https://steamcommunity.com/app/360830/discussions/0/133260909495467131/

Keep in mind that Playtonic is the kind of company that only employs people who agree with them politically. There's a strong correlation with only looking at a small portion of a candidate pool due to political bias and not finding good employees.
5 Likes, Who?

pb 16 Jan, 2018
That's odd, I (almost*) never had issues with this game, me and the kids played a few dozen hours, no idea why they would remove the Linux build (also I think I still have it installed on my steam machine and I'm not opted-in to beta).

* two minor issues - the first world boss was bugged in the beginning, and some time ago controller stopped working after a steamos/drivers update, not really game's fault.
0 Likes

pb 16 Jan, 2018
"They say if you opt into the "mac_and_linux_old" beta you will get access again, however, it's not clear how old that build actually is"

JonTron wasn't an employee nor a candidate, though. They offered him to make an unpaid contribution to the game, he did, and they chose not to use it.
4 Likes, Who?

View PC info
I was looking forward to picking this game up at some point, but the reception's been quite mixed. I'll probably get it in a sale at some point, hopefully this is fixed by then. Meanwhile I'll just look longingly at A Hat in Time :|

That's got nothing to do with anything regarding the article, please bait elsewhere, friend.


Last edited by HadBabits on 16 January 2018 at 4:23 pm UTC
7 Likes, Who?
Dutchie 16 Jan, 2018
I own the game and I've been enjoying it a lot. Downloading on Linux Steam without choosing the beta will retrieve 0kB of data, it's just an empty branch. They are abusing the beta functionality of Steam to get the game out there on different platforms and nobody knows why the Steam default branches for Mac and Linux don't work for them (anymore).

No issues whatsoever on running the game, it is a really good port and game. I can check out the version, if I can figure out where to find it.
0 Likes

View PC info
I bought this game maybe 2 weeks ago in preparation for my Steam Machine rebuild.

I will ABSOLUTELY be returning it if they don't get their shit together on this one.
0 Likes