The MMO Albion Online is now available on Steam, no keys for current owners 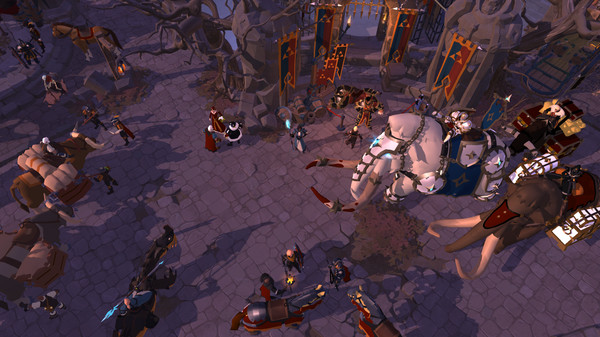 In addition, they've also announced a sale for the game, all versions are currently 34% off which includes the upgrades from one pack to another. On top of that, they've enabled a fame boost (their form of XP) for all activities like gathering, crafting, killing and so on until May 23rd.

Sadly though, they still won't be giving out Steam keys to existing owners. You can read their statement on that here. The gist of it, is that they don't want to lose a substancial amount of their income as Steam will take a cut of in-game purchases. I'm still a little torn on this, I fully understand their reasoning, but I think they will have lost a fair bit of player goodwill due to their decision.

Still, it's not a bad game overall. There's a lot of combat to do, a big world to explore and it has slowly gained more interesting PvE content. Good to have such an MMO on Linux, even if it's no longer a favourite of mine. I'm hoping they do a big PvE expansion sometime, that would pull me right back in.

Find it on Steam or just head to their official site.

Article taken from GamingOnLinux.com.
Tags: Indie Game, MMO, Steam, Unity
4 Likes, Who?
We do often include affiliate links to earn us some pennies. We are currently affiliated with GOG, Humble Store and Paradox Interactive. See more information here.
About the author - Liam Dawe

I am playing a little almost everyday. Mostly improving skills and getting some silver. Waiting for some PVE improvement. Missing the feeling of going in an adventure with unknown results and rewards.

If the current DEVs dont have criativity to do something nice about PVE they could outsource it to some other company. So much potential in the game.
0 Likes

View PC info
Let's hope some more players will come in via Steam. More PVE content would be highly welcome but overall it is already very good as it is in my opinion.
0 Likes

View PC info
it looks very pay to win, and its not even free to play. I'll pass
1 Likes, Who?

On the steam forums there is a work around. I don't know if it works because I have not purchased the game yet.

Try moving the install folder to the default steam directory, and using this LD_Preload "LD_PRELOAD=~/.local/share/Steam/ubuntu12_32/steam-runtime/amd64/usr/lib/x86_64-linux-gnu/libSDL2-2.0.so.0 %command%" If it works let me know so I can buy it

If I could play through Steam, that wouldn't have been a problem. Yes, I'm sort of lazy (obviously not 100% of the time as you see I run Arch), but I'm not alone in this. I want to click and play.

I will not re-buy the game in Steam.
0 Likes

Change wherever your Albion Online bash script launcher to look like the below and do a sudo dnf install qt5-qtwebengine. This works for me under Fedora 28 just fine - or use the Flatpak.

Heya!
I am also using Fedora 28 and was struggling to get Albion working.

Before trying tailDASHeF suggestion, try doing what I did below:
Download the "libsndio.so.6.1" file.
One source is this: https://nofile.io/f/hEMNfgyAQ09
Place this file inside /usr/lib64 (need root privileges of course).


If it still crashes, besides this mentioned above, also do the part suggested by tailDASHeF.
Put this inside the game script launcher (Albion-Online file):
LD_PRELOAD=~/.local/share/Steam/ubuntu12_32/steam-runtime/amd64/usr/lib/x86_64-linux-gnu/libSDL2-2.0.so.0 "$SCRIPTPATH/launcher/Albion-Online" "--no-sandbox" "$@" &