The Myst 25th Anniversary Collection [Kickstarter] is currently crowdfunding on Kickstarter and the developer has teamed up with Codeweavers for the Mac version, turns out they're looking into Linux too.

Sounds like a pretty decent package, as it will include all the Myst games, all seven of them in fact. 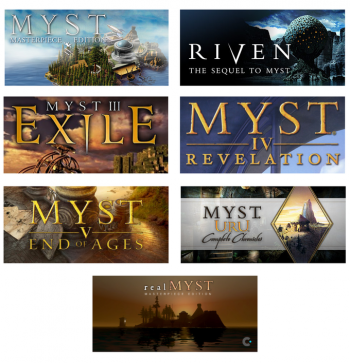 For those that haven't heard of Codeweavers, they're the folks that support the Wine project and have their own commercial application named CrossOver. CrossOver is essentially their own special build of Wine, along with their own user interface.

Cyan Worlds announced earlier this month, that they teamed up with Codeweavers to handle the Mac builds, nothing was said about Linux. However, we had a nice tip from GOL fan "nox" noting that their FAQ has been updated to include this:

Since Codeweavers works with Linux, too, will Linux ports of the Myst 25 Collection also be available for Backers?
The Linux option is now being investigated. More news to come!

The developers also said GOG has given them a hand too, which is nice.

It's already funded, well over the goal in fact. Will let you know if we hear any more on this.

Article taken from GamingOnLinux.com.
Tags: Crowdfunding
18 Likes, Who?
We do often include affiliate links to earn us some pennies. We are currently affiliated with GOG, Humble Store and Paradox Interactive. See more here.
About the author - Liam Dawe

View PC info
Played all of Myst games at the time, all were very good but Riven, oh boy, it was a masterpiece.
2 Likes, Who?

jgacasPlayed all of Myst games at the time, all were very good but Riven, oh boy, it was a masterpiece.

I bought a pack ages (lol) ago with all of those in it, except realMyst, and also bought Myst IV seperately (hey, the box was nice), but I'm happy to buy it all again if native (even if just wrapped) Linux ports showed up. Perhaps this time I'll work on finishing the ones I have yet to finish!
6 Likes, Who?

View PC info
Ooh, nice! I haven't actually played all of them yet.
2 Likes, Who?

View PC info
Instantbuy for me if they are available for Linux on Gog.
3 Likes, Who?

LuciousBlake 16 May, 2018
View PC info
Would buy this in a heartbeat. Loved these games.
1 Likes, Who?

View PC info
I beat the original Myst on the Atari Jaguar CD. I think I have it for the Amiga somewhere too. It is one of those fames that released for just about every platform. I still need to play Obduction in VR (it is made by the same developers as Myst.)
1 Likes, Who?

View PC info
I would love to play through those again on Linux!