The client for the game store itch.io [Official Site, App Download, Github] has been updated again and it has some really useful stuff this time. Find the new release here.

Highlights
- The itch.io app can now log you in easily to the actual itch.io website if you have two-factor auth setup, as it will just send you a simple code to enter.

- You can now verify the integrity of games, as long as they were uploaded with the itch.io command-line tools, standard web uploads are not supported with that feature.

- You can revert to older versions of games, if they were also uploaded with the itch.io command-line tools (awesome feature). 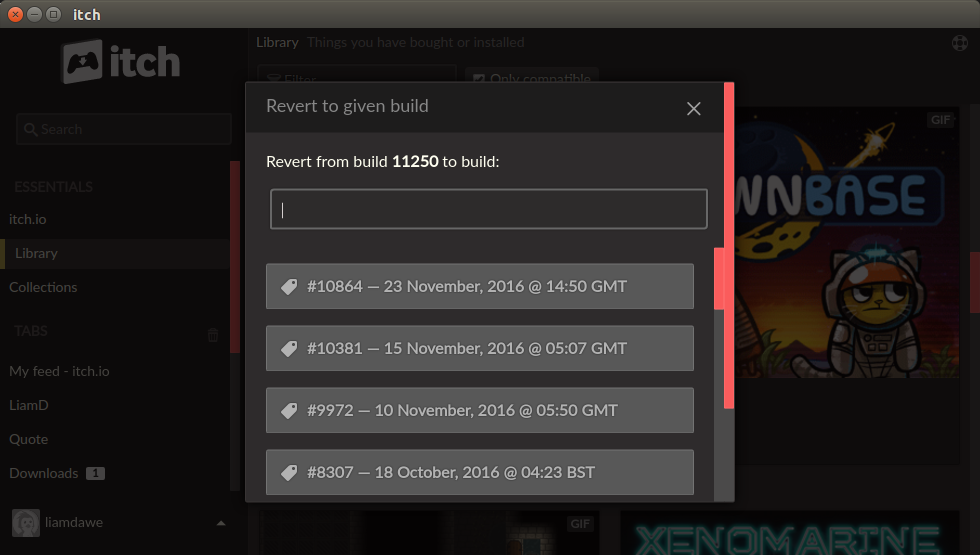 - Tray icon is now monochrome on Linux and Windows 10

As always, a big fan of what they're doing. The itch.io store and application have come a long way in a very short amount of time. It has quickly become a favourite application of mine and I do plan to cover itch.io games more as time goes on. If you find any good stuff, be sure to send them in!

Also, for those interested, the space colony building sim 'Maia' is now on itch.io. Article taken from GamingOnLinux.com.
Tags: Itch.io, Open Source
3 Likes, Who?
We do often include affiliate links to earn us some pennies. We are currently affiliated with GOG and Humble Store. See more here.
About the author - Liam Dawe

I am the owner of GamingOnLinux. After discovering Linux back in the days of Mandrake in 2003, I constantly came back to check on the progress of Linux until Ubuntu appeared on the scene and it helped me to really love it. You can reach me easily by emailing GamingOnLinux directly.
See more from me
Some you may have missed, popular articles from the last month:
The comments on this article are closed.
10 comments
Guest 15 Dec, 2016
Itch has some great games. I recommend 'Streets of Rogue' ^_^

View PC info
I have all but given up doing my own native builds, since the approach is so convoluted. The deb work fine, so that is fine. I love the pace of this project. Great work.
0 Likes

View PC info
Sure, good app. But it's a fucking nightmare to package. And if you don't package it and build/install from source, it pulls in a metric ass-ton of shit.

Quoting: Luke_NukemSure, good app. But it's a fucking nightmare to package. And if you don't package it and build/install from source, it pulls in a metric ass-ton of shit.

View PC info
I still find the online itch.io much less of a headache --- literally. The hyperbolically microscopic font chosen for the client is an unnecessary and poor UI design decision.

For me, the newest client checks for updates, fails to contact its server, and if the notice dialogue is clicked, searches endlessly for updates.

But nevertheless, past bugs have been fixed: games download into my chosen default location, and I can now refine searches/browsing games by more than one filter at a time, for example. So while I remain underwhelmed by the itch client, I remain hopeful for its future.

View PC info
Well do make sure you report issues, they do fix them.
1 Likes, Who?

I don't get what you mean, pick one what?
0 Likes

Reference to the good old software quality triangle paradox. Usually three traits, but you can only ever pick two of them.
0 Likes
babai 17 Dec, 2016

Just what Luke_Nukem said above, electron apps make rapid UI development rather easy for devs, it gives them all sorts of freedom in designing but comes at the cost of being bloated and without proper integration.
On the other hand, in a Qt app you'd find tight desktop integration but design freedom is not as extensive or easy for devs.
So you can only opt for any one aproach, the best of both worlds is not there (well maybe QML is there).
0 Likes

Quoting: liamdaweWell do make sure you report issues, they do fix them.

Indeed, they do. (For example, my complaint here about the endlessly cycling "checking for updates" has been patched as of this morning, and I only yet mentioned it on GoL.)

The only issue I've ever contacted them about was the one I mentioned above, the very small font size that's default in the itch client. I also suggested two possible fixes that came to mind: Adding a "zoom in/out" feature as is available on browsers, or adding a means for users to directly adjust font size via a percentage setting."

I was let down when the the response I received said that there were more important issues to be addressed before making the "itch app better for use on a TV . . . . [though,] TV+controller-friendly mode would be interesting!" I didn't ask for an entire TV/controller-friendly mode. In fact I specifically said, "I don't think a Steam Big Picture Mode solution is even remotely necessary for itch." I just asked for means to enlarge the font a bit.

Given the browser-based/browser-like nature of the itch.app, I just can't imagine it would be too difficult or time consuming to accomplish a preference setting allowing the user to adjust the font size. Hell, just make the default font a bit larger, surely that would entail nothing more sophisticated than changing a single number in the code?

I'll get off my soapbox and give somebody else a turn. ;)


Last edited by Nanobang on 17 December 2016 at 4:10 pm UTC
0 Likes
While you're here, please consider supporting GamingOnLinux on: