The Paradox Launcher is now available on Linux

Thanks to a hot tip from our Telegram Group, we've been notified that the Paradox Launcher is now available on Linux.

Announced on their forum:

I'm very pleased to bring you the news that after much anticipation and gnashing of teeth, the Linux version of the PDX Launcher is now available for download. At this time, only Stellaris is available for download and installation, but our other games with Linux support will be forthcoming (in a more expedited way than the launcher itself, fortunately!).

Caveat emptor! As much as the launcher is beta quality software, the linux version has had even less testing done on it. I do anticipate, however, that people interested in the Linux version will have the capacity to find workarounds for non-critical bugs.

As usual, we have some secret sauce on the cooker (this is the games industry after all) but we'll still try to get some QA and general quality-of-life fixes in during the autumn. In other news, Swedish summer vacations is almost upon us, so set your expectations accordingly! 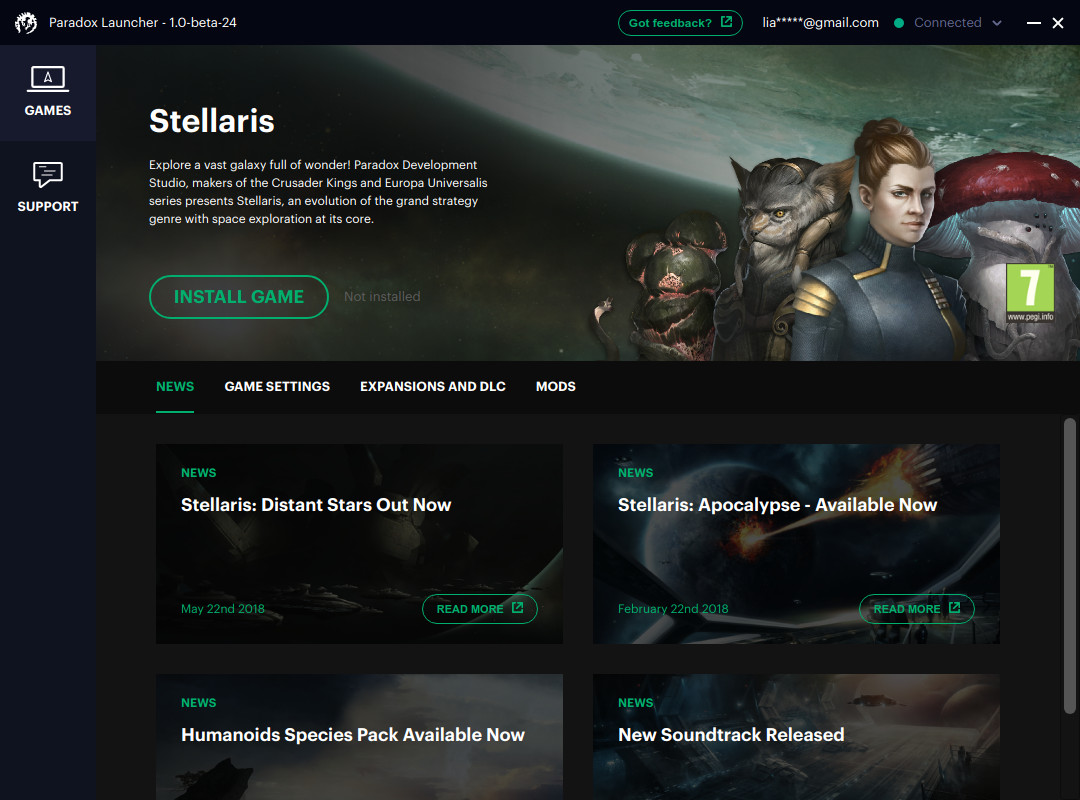 What's the point in another client? I hear you ask. Well, it's a way for developers and publishers to have more direct control over the experience. It also likely means they take a bigger cut of any sales made, since they won't be giving a chunk to stores like Steam.

Personally, I will most likely stick to the Steam client since it does everything I want it to. However, I can appreciate for all those who would rather purchase elsewhere that this will be welcome news. It not only shows that Paradox is continuing their support of Linux, but also allows you to keep your games up to date, get cloud saves and so on.

Article taken from GamingOnLinux.com.
Tags: Apps
25 Likes, Who?
We do often include affiliate links to earn us some pennies. We are currently affiliated with GOG, Humble Store and Paradox Interactive. See more information here.
About the author - Liam Dawe

I am the owner of GamingOnLinux. After discovering Linux back in the days of Mandrake in 2003, I constantly came back to check on the progress of Linux until Ubuntu appeared on the scene and it helped me to really love it. You can reach me easily by emailing GamingOnLinux directly.
See more from me
The comments on this article are closed.
54 comments
Page: 1/6»

View PC info
maybe they get more money with each sale, but now they have higher costes. own servers and linux programmer for the launcher
maybe gog follows
2 Likes, Who?

mylkamaybe they get more money with each sale, but now they have higher costes. own servers and linux programmer for the launcher
maybe gog follows

mylkamaybe they get more money with each sale, but now they have higher costes. own servers and linux programmer for the launcher
maybe gog follows

I think that it's simply that they have now grown big enough to where those costs are less than having to give away 30% of each sale to companies such as Valve.

Now I don't have longer data than back to 2013 in the database (they listed their share in 2016) but they seam to have made some nice increase in both sales and profit (ptp in the table below is the pre-tax-profit) and while not close to a behemoth like EA they are probably as I wrote before closing in on the kind of sales numbers where 30% suddenly are quite a lot of actual money (aprox 35M EUR in 2017 if we assume that all sales are from places like Steam).


edit: ok this is strange, the table is perfectly aligned in both the edit and the Preview but skewed when actually posted...

View PC info
Sweet, running on Slackware 14.2. I have installed so many libraries not sure if I needed any extra.

Looking forward to seeing Surviving Mars added, currently unplayable since last patch as it freezes (and yes I have opened a ticket, but its seems to now being ignored afaik).
1 Likes, Who?

View PC info
Installing and running launchers from every publisher I buy from is pretty much the opposite of what I want, but nonetheless this is welcome news as it shows that they take their Linux playerbase seriously and are willing to invest in that segment of the market. I hope it does well

View PC info
IIRC launchers are not allowed on SteamOS due to them not able to handle fullscreen.
1 Likes, Who?