The Realm (including platform survey) UPDATED

Recently Atomhawk added Linux as a stretch goal for their crowdfunded point and click adventure The Realm. I've been discussing with them the notion of proritising Linux support sooner, and they've put together a survey to gauge interest. 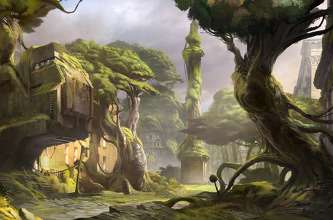 When I first spotted the pitch video for The Realm, a point and click adventure game that Atomhawk and Lantern Interactive currently have a Kickstarter campaign running for, I was quite taken in.

Their painterly artwork they're currently working with looks beautiful, as does the Miazaki inspired setting and story. I'll be updating this post with a deeper description of the game soon, but for now, I'd like to ask for everybody's help in highlighting how important Linux support is to our readers by filling out this survey that the developers have put together.

Vote for Linux and we'll see if together, we can get native support pulled ahead of the £300k stretch goal.

Update: They are doing a Linux version!

QuoteThanks to all of you who answered our poll. We've had a lot of conversations with Linux users and there was a strong feeling that Linux shouldn't be a stretch goal.  So we decided - we are going to do The Realm on Linux together with the Windows and Mac version as part of our normal release!

They're also asking for anybody interested in helping test the Linux version to get in touch via info@therealmgame.com

You can read the announcement here.

I do more stuff than could ever fit into a bio.
See more from me
Some you may have missed, popular articles from the last month:
The comments on this article are closed.
5 comments

Normally, I'd agree with that, but I've too often seen non-Linux backers of crowdfunding projects claim that Linux support is a waste of resources and start begging developers to not support it. In this case, I think it's for the best that results aren't made available prior to any decisions being made (I will ask them if they'll make the results available after any outcomes have been decided upon, though).

Edit: Somebody beat me to updating the thread! An announcement has been made regarding Linux support.
0 Likes
Ba7a7chy 26 Apr, 2013
WIN !! Good job GOL ;)

QuoteThanks to all of you who answered our poll. We've had a lot of conversations with Linux users and there was a strong feeling that Linux shouldn't be a stretch goal.  So we decided - we are going to do The Realm on Linux together with the Windows and Mac version as part of our normal release!

0 Likes
jlibster 26 Apr, 2013
That IS an improvement. Maybe I'll pledge. (budget streched a little thin...but it looks worth it)
0 Likes

View PC info
Totally cool that they no longer relegate Linux to the realm of stretch goal ;)
0 Likes
While you're here, please consider supporting GamingOnLinux on: