The situation of 'RUINER' coming to Linux is so very strange, developers now asking for requests

I was excited about RUINER [Official Site], as I'm sure many of you were also. It was originally announced the Linux support and now it's just strange. 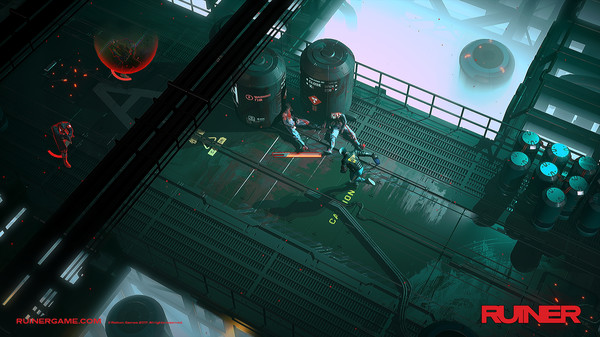 In their original announcement, that's still up unedited, it clearly says it's coming to Linux:

After more than a year of quietly making RUINER, we're ready to share a big announcement - Reikon Games is joining forces with Devolver Digital to bring RUINER to the world on PC, Mac, and Linux!

Then in August they said it was delayed:

Hello,
due to some technical issues we need to delay the Linux version of RUINER. So we are sorry to confirm that no day one release for Linux/Steam OS :(.

Sorry for that,
RUINERS

I reached out on Twitter yesterday, since both the developer and publisher had previously ignored all my messages elsewhere. They actually replied this time, but it wasn't good news:

Unfortunately, we do not plan Linux port anytime soon.

I initially thought it was a PR response by someone who didn't really know what was going on. Now, it's even more unclear. I did follow that up, asking for more information since it was originally a confirmed platform. They didn't reply, in all fairness it's not a lot of time since I replied again, but keep reading.

Now we land on the latest post today on Steam, where they're now asking for posts in support of a Linux version:

Could you do as a favor? If you are interested in the Linux port of Ruiner, write +1 under this comment.

Issues come up sure, but this is just silly now.

Thanks for the tip on the last bit, bingus!

Article taken from GamingOnLinux.com.
Tags: Action, Upcoming
10 Likes, Who?
We do often include affiliate links to earn us some pennies. We are currently affiliated with GOG and Humble Store. See more here.
About the author - Liam Dawe

View PC info
Well, it seems to me they never intended to port to Linux, only said it in marketing because why not, but now they see there may be interest so they ask around to see if it's worthy or not.
3 Likes, Who?

View PC info
This sounds unprofessional to me.
11 Likes, Who?

Quoting: ShmerlThis sounds unprofessional to me.

No, not really. Deadline is nearing, and as always there are lots of things to be done, and managers are starting to look for things to cut to meet the deadline. Does not necessarily mean that Linux is canceled, but that it has been reduced in priority in favor of some contractual obligations they need to meet.

It's no insider knowledge or anything, just my experience with how software projects tend to work.
7 Likes, Who?

Quoting: LinasDoes not necessarily mean that Linux is canceled, but that it has been reduced in priority in favor of some contractual obligations they need to meet.

I don't mean the difficulties, but the way they are handled, especially communication.
4 Likes, Who?

View PC info
I have a certain feeling, that they are making fun of us :S:
Nevertheless I've put my +1 in the thread, disregarding the steam forum rules ^^

Let's see how this turns out.

Which other game wanted to have a +1 thread for Linux recently, to see the demand? How did that turn out?
3 Likes, Who?

Quoting: CorbenWhich other game wanted to have a +1 thread for Linux recently, to see the demand? How did that turn out?

Other Side Entertaintment studio (developers of Underworld Ascendant) made a poll on their own site, but before making any promises. And after feedback, they included Linux in their crowdfunding goals. Recently, Oxide Games made one for Ashes of Singularity.

View PC info
Added GOG wishlist, for those who don't have a Steam account:
https://www.gog.com/wishlist/games/release_ruiner_for_linux_on_gog
6 Likes, Who?

Quoting: TcheyWell, it seems to me they never intended to port to Linux, only said it in marketing because why not, but now they see there may be interest so they ask around to see if it's worthy or not.

To me it looks more like they might actually have an honest intention of doing Linux version, but somebody higher (investor?) makes problems with that and stops them from doing it, so they need arguments that it is feasible to be able to take that direction. But, anyway, without further information we can only speculate, and they do not seem to be too open in their communication…
2 Likes, Who?

iplaygameswearingatux 15 Sep, 2017
"The settings on this account do not allow you to add comments" :(
0 Likes
1/3»
While you're here, please consider supporting GamingOnLinux on: