UPDATE: Actually, it didn't go up.

The Linux market share on Steam has bounced backed a little in the latest Steam Hardware Survey for December 2017.

Note: Valve do sometimes adjust these numbers a few days later, so keep an eye on it.

As I noted in a recent article, one of the biggest causes of the Linux market share dropping on Steam was an influx of users from Asia. It seems the latest data has gone the opposite way. Here's a look at where Linux is at currently: 0.43%. That's quite an increase, considering the month before it was at 0.27%.

Here's some updated charts from the previous article (do read it for more info), first here's the Linux market share just by itself as a reference: 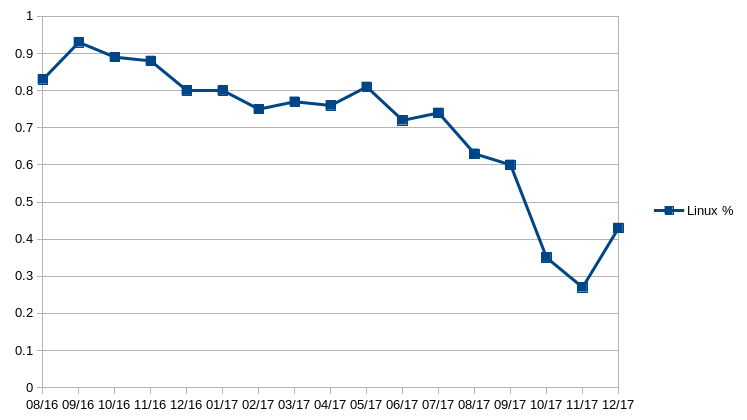 Here's what happens again when we look at languages and what happened with them over that same period: 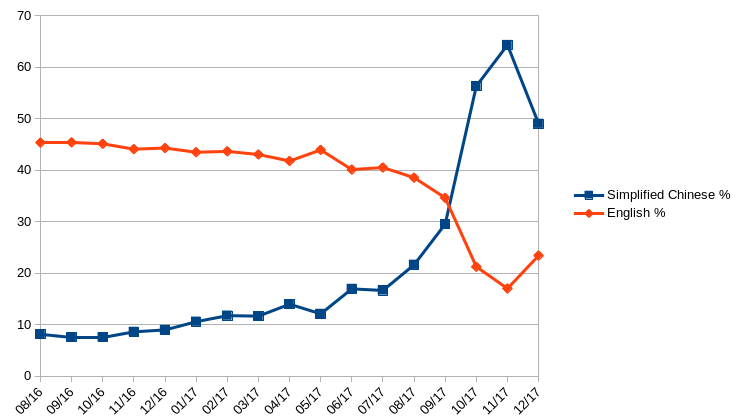 And finally, here's what happens when we look at the market share when we take out Simplified Chinese and we look at just English as languages on Steam: 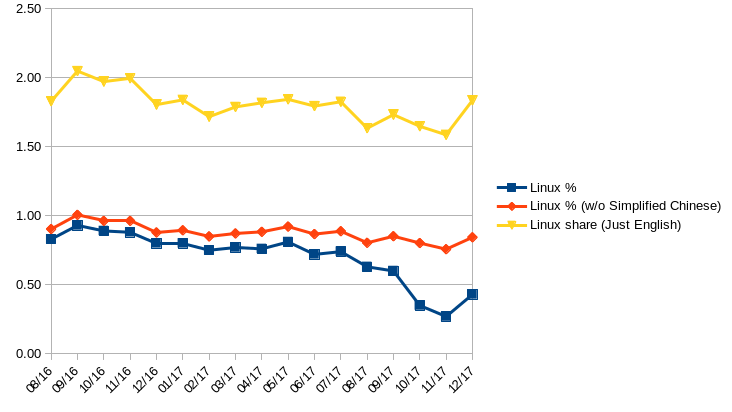 I did say it would bounce back. However, I expect it to be all over the place this year, up and down constantly due to games like PLAYERUNKNOWN'S BATTLEGROUNDS not being on Linux, which is currently the most popular game on Steam. It's also still growing, since it hit 3.1 million players online only three days ago, which is why I still expect the numbers to change both ways over the year. Also somewhat interesting, is that BattlEye tweeted out about 1.5 million bans being handed out for PUBG.

View PC info
And here I thought that linux would take a nose dive after banning all linux machines named "catbot". :D

Quoting: stretch611And here I thought that linux would take a nose dive after banning all linux machines named catbox

Wait until bots change their names and the auto-bans start to happen. Spin the wheel of fortune !

View PC info
1.5 million PUBG accounts banned, thats must be it, they mention that most of the cheaters are from china in another tweet.. windows 7 usage also dropped. well they will get new accounts soon though, but yeah.
6 Likes, Who?
Guest 2 Jan, 2018

Quoting: Xpander1.5 million PUBG accounts banned, thats must be it, they mention that most of the cheaters are from china in another tweet.. windows 7 usage also dropped. well they will get new accounts soon though, but yeah.

They should use Linux, everybody knows Haxors use Linux.
4 Likes, Who?

Quoting: Xpander1.5 million PUBG accounts banned, thats must be it, they mention that most of the cheaters are from china in another tweet.. windows 7 usage also dropped. well they will get new accounts soon though, but yeah.

They should use Linux, everybody knows Haxors use Linux.

View PC info
Let's wait for January results to confirm it, but it seems that October and November results were outliers. December results seem to continue the earlier trend downwards though.
0 Likes
Kon 2 Jan, 2018

This time I got a popup about the survey. Only one I got this year.
1 Likes, Who?

FirearmsUnited 2 Jan, 2018
It should be noted that Valve might have been tweaking their survey method because yesterday I was asked to submit my hardware statistics and I haven't gotten this opportunity in a very long time. Like over a year.

But that's only my personal experience so it might not represent the overall situation.
1 Likes, Who?
1/4»
While you're here, please consider supporting GamingOnLinux on: