The survival game 'Rust' has come a long way, I've completely changed my mind about it

Note: My copy was personally purchased, quite some time ago.

The problem I always have with survival games is that they feel like an endless and boring grind, but Rust has somehow managed to throw that feeling out the window.

I've now experienced the fear of walking out of my house at night, to find a shadowy figure standing on my roof with some sort of assault rifle. I shortly met my end, but it was frantic and exciting to experience the absolutely panic and dread at seeing them there. There's many little stories like that you can get from Rust, like the ninja boar that sneaked up on me while I was mining and ran away right after it hit me. All I saw was a boar butt running off into the long grass―sneaky little devil! It practically made me crap myself, it was so totally unexpected.

For me, it's the fact that it's a sandbox that doesn't require endless level grinding to access items. They tried that once, it didn't work and they responded to feedback and removed it. Sure there's a bit of resource grinding, as practically any open-world game requires grinding of some kind, plenty from other genres do too! In Rust you only need the resources to make the items. There's no levelling, no classes―just a proper sandbox. Want to build a tower? Go ahead! Want to throw on a hazmat suit and explore some radioactive ruins? That's cool too.

When playing Rust, there's one rule you should generally follow: trust no one. You shouldn't buy Rust if you're not prepared to lose hour's worth of loot at a moment's notice, as it will happen. You might log in one day to find something like this: 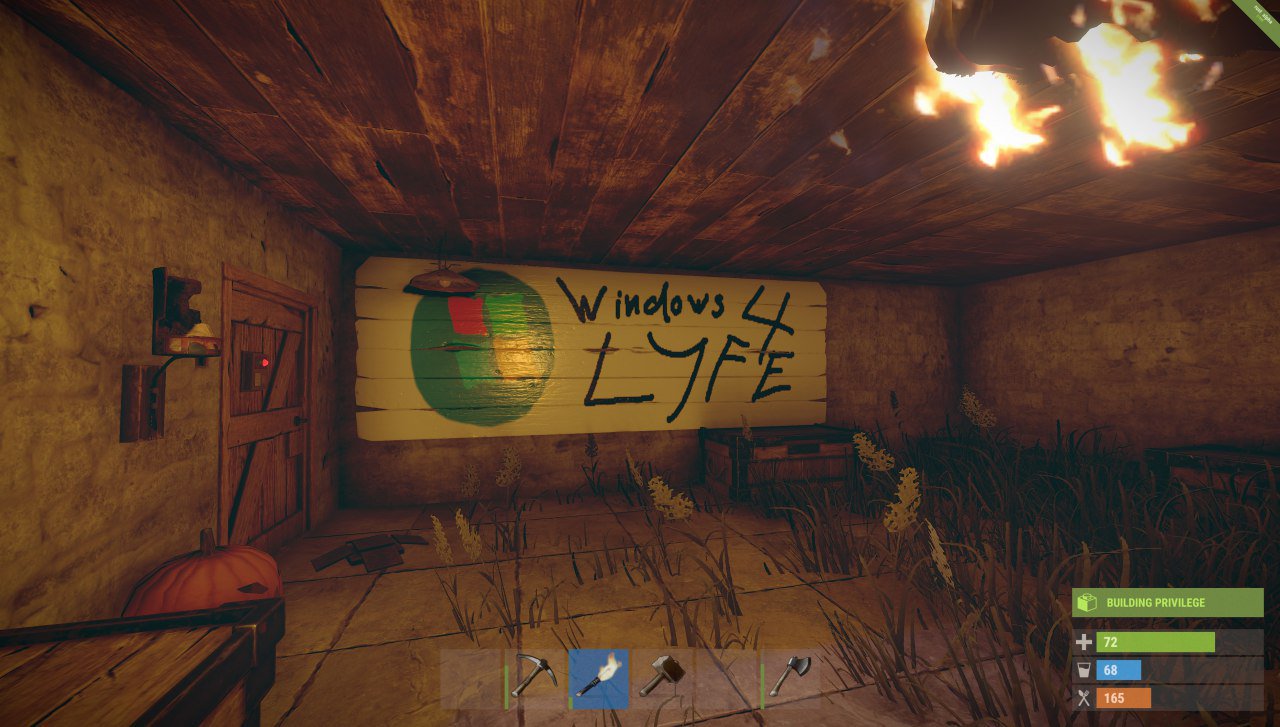 They left us cold, naked and afraid. They also took all of our stuff―bastards! I've still got no idea who did it! That happened more than once, people sure do love to leave a sign to laugh in your naked face. The thing with Rust, is that when you log out, your body is still in the game. If you kill someone, the game will tell them exactly who did it. However, this makes it rather interesting. You could literally build a jail around them, or just pilfer all their crap, leave them naked and put a code lock on their door to be a nuisance.

In stark contrast to other survival games (hello ARK), the game actually runs incredibly well. I'm often above 90FPS on quite high settings. It does have a strange bug where running it in fullscreen results in no mouse and keyboard input, but running it in Windowed Mode until that's fixed does solve it. I'm pretty sure that's a Unity bug and not their problem, since other Unity games have the same issue.

In Rust there's a plane that flies over the map at random intervals to drop a big loot box, but don't think even for one second getting it is going to be easy. I honestly can't count the amount of times I've gone to grab it, to be taken out by a wolf. The absolutely terrifying sound of hearing footsteps suddenly speed towards you, as you see the jaws of a wolf jump out of the grass. Everything in this game is trying to kill you, unless you're that stupid horse I can never catch that runs at the slightest fucking breeze. On top of that, players will camp the drop out, waiting for you. Think you're safe? Think you got there first? Think again buddy.

The visuals in Rust can be absolutely amazing at times too, take this particular shot I took at random early on into our new server:

I looked out of the window in our first house, saw this and I was in absolute awe at just how utterly gorgeous this game really is. That shot isn't even close to being maxed out either, which is amazing.

It does get a bit of stutter and frame-drop when it's loading new areas in, but it's not too often. This can likely be reduced by having the game on an SSD rather than a standard HDD. It's acceptable to me, considering the game isn't finished and they are clearly working on optimizations all the time.

Rust is just constant eye candy! I honestly think it's one of the best looking games we have available on Linux. Quite shocking really compared to how it was only a year ago. Take this shot from youtuber and GOL community member xpander69 that was taken on our server: 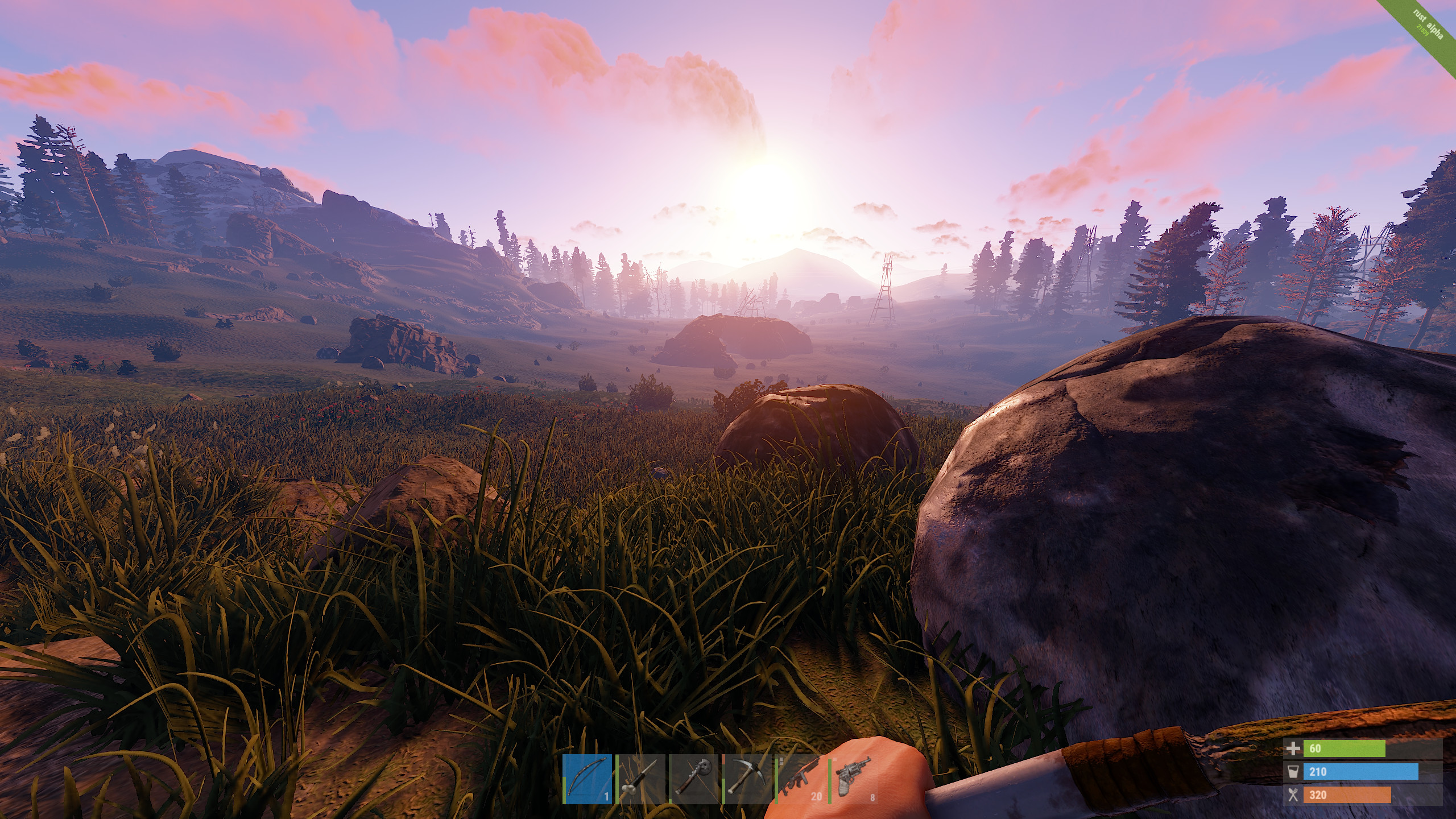 I'm looking at this image, struggling to put into words how I feel about it. It's almost film-like quality with the colours—it's just so striking.

If you want to play with us, we have a server! See the server information in this linked article.

I'm also appreciating how open the developers are about what they're doing with the game. The frequent blog posts detailing various sections of the game being worked on, along with a bit of comedy at times about the nudity.

Honestly, I'm a little shocked to be recommending it. You can find Rust on Steam. Article taken from GamingOnLinux.com.
Tags: Early Access, Review, Sandbox, Survival | Apps: RUST
11 Likes , Who?
Share

Ardje 17 Jul, 2017
View PC info
I don't like multiplayer games, which is the main reason I postponed buying rust (as I have several sandbox games that I like, including Ark ;-) ).
But I am a sucker for eye candy too... So I think I will be testing ideal payment on big picture using this.
But currently Ark (for now) and later on FCE (when the mass storage limiter enters) suck up all my time.
1 Likes, Who?

View PC info
Thank you for this server, Liam! My partner and I have had so many great moments so far, even met the only guy we kinda sorta trust.

I very much recommend this game, but be prepared to run it on low settings unless you have very up-to-date hardware as the game starts chugging badly on higher settings after a while (seems like vram is very important for it)
2 Likes, Who?

View PC info
I've had the game for quite a while too & previously it was just hopeless so I uninstalled it & forgot about it, after Liam mentioned how good it works now I thought I'd give it another shot & while I haven't had a lot of time to do anything in game it does look fantastic now, a VAST improvement on what I remember from the last time I tried it. One of these days if I get the time I'll be sure to log into the GOL Server & see what's what.
0 Likes

Ketil 17 Jul, 2017
View PC info
Rust need other players to be fun. If you don't encounter them, this game run out of content quite fast. I also find the grinding in this game less enjoyable than in many other games. I have never been raided, and getting C4 for doing raids myself requires a lot of grinding for sulphur. I did a quick comparison of different explosives, and C4 is much more powerful than anything else, and even though one C4 cost a lot, you will need a lot of the cheaper ones to do the same damage as a C4.

I experience massive slowdowns without warning when playing rust on maxed graphics and having a web browser with a few tabs open at the same time. It runs fine, until it doesn't, possibly because I am out of memory(16GB total). It is fixable by a reboot, but by the time I am back in I will probably be dead if I am not in my base when it happens.

Graphically, it is generally too bright during the day. Rust need more clouds to cover the sun. The shadows look nice, but some of them are too dark and look wrong. The best graphics are at dawn/dusk because it isn't too bright any more and you see long and many shadows. The red tint makes it nice as well.

Rust is probably the game where I experienced the best 10 minutes of gameplay since 2007 or earlier, but the last few days it has only been boring.

I picked up rust in a bundle almost a year ago, but didn't start play it until the gol-server the 6th of July this year. From the time I have had with the game I think it's worth $9.99, half the current price.
0 Likes
Aryvandaar 17 Jul, 2017

Indeed, is the PVE aspect of the game (you mentioned a "ninja"-oar, for example)interesting enough to just enjoy it as a single-player, possibly co-op, PVE experience?
0 Likes

View PC info
I tried it for one evening and never went back to it. Performance was a major issue and graphics settings changed very little. It was mentioned that this game is VRAM hungry, so apparently you really do need more than 4 GB of it to get it to perform.

Second problem. I spent the first hour looking for stone. Even though rock is everywhere, you can't use it because you have to find specific boulders that I only found in one small cave. Maybe I'm missing something, but that just seems weird.
0 Likes
posmunk 17 Jul, 2017

I experience some real performance problems, and have for some months. Get around 45 fps in average in some areas from time to time, and I can't handle that... seems to be independent of graphical settings - same on lowest.

Half a year ago I used to average 100 fps, and I bought a more powerful graphic card since then, so the problem must be something else.

Indeed, is the PVE aspect of the game (you mentioned a "ninja"-oar, for example)interesting enough to just enjoy it as a single-player, possibly co-op, PVE experience?

Having no offline raiding doesn't mean that you can't have normal PvP.
0 Likes

Mountain Man 17 Jul, 2017
View PC info
Sounds like the perfect game for trolls and griefers. No thanks.

And while the graphics are nice, I think you overrate them quite a bit just judging by the screenshots.
1 Likes, Who?
1/4»
While you're here, please consider supporting GamingOnLinux on: