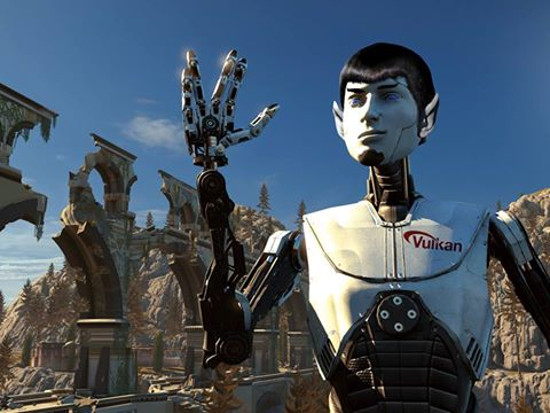 The Talos Principle is a very popular puzzle game from Croteam, and they already have a Windows build out that uses Vulkan. We Linux gamers will need to wait a few days, but it will be fun to see.

Looks like they had a few issues that won't take too long to sort:


QuoteLinux.PlayX, the Linux build is coming in like a day or two. We had issues setting it up in that we never before released an x64 Linux build. As soon as we prepare it for upload it will be available to you.

The developers went into a little more depth about the Vulkan work for Talos:

1)
Port. Make it work as fast as possible just by wrapping current engine design around Vulkan. Avoid all pitfalls and bottlenecks. This is what we did by now and released as patch for Talos.

2)
Use Vulkan for multi-threaded rendering. Our engine is designed really well for multi-threaded rendering, but we have only our wrapper for it - calls to graphics API (like Vulkan) are not multi-threaded. Yet.
That being said, this is the next step what we'll do. And probably release that also as patch for Talos. I tried to do that with Direct3D 11 long time ago (support for its deffered contexts), but it was too much pain and too little or even no gain. :( That's just one of reasons why we decided to stick with our own approach for MT renderer for that long. :/

3)
Redesign engine for Vulkan. This is the biggest step and can be split in two:

3a)
Precache all rendering states (which mostly mean materials in game) up front. This will make rendering calls much simplier and faster. So, instead of deciding at rendering time what is needed for a material to be rendered via Vulkan, do this at loading time and then when material needs to be rendered just give it to Vulkan, via one or two simple function calls.

3b)
Precache all geometry, material, textures, everything that is needed for rendering an object up front. This basically creates so called command buffer ready for Vulkan, and nothing extra needs to be set or created at render time.

3rd part of port is, obviously, the most complex one, and it'll take time to change engine design for it, step-by-step.

Hope I explained this well. :)
DEN

So, before you start seeing benchmarks of it doing better than OpenGL, but worse than DirectX, please remember it's a work in progress. The haven't added in proper multi-threading yet (point 2 above). Article taken from GamingOnLinux.com.
Tags: Puzzle, Steam, Vulkan
0 Likes
Share

View PC info
Great news, but will need to download again or come by updates?
0 Likes

Quoting: YasserGreat news, but will need to download again or come by updates?

There's already an update in the public beta branch available (it does not yet support Vulkan on Linux, as said - in a few days though).

View PC info
For now The Talos Principle on Vulkan is only wrapped... Nothing interested in performance state.
0 Likes

They wrapped "engine design around Vulkan", not Vulkan around OpenGL or something. All fine.
0 Likes

First, you get it working and fix all stability bugs. Then you start it tweaking and giving feedback to vendors about their drivers and performance.

Despite being wrapped, it's performing better than OpenGL on windows. That's a good start if the Linux results are similar.
1 Likes, Who?

View PC info
I wonder whether there'll be any improvement with respect to texture pop-in, which is awful right now on my system (gtx970, 361.28 drivers).
0 Likes

I'm getting occassional texture popin from SSD.
(Will still try your tip.)
0 Likes

Thanks for the suggestion, but it didn't make any difference.

I let the game itself select 'optimal settings'; but something is definitely wrong. I can tweak the settings by hand, though there are so many that I don't know where to start. Also the game doesn't use more than ~900MB VRAM, when a lot more is available.
0 Likes

I haven’t noticed any texture streaming issue, except at the very start of the game, on these settings:
CPU speed: Ultra
GPU speed: Medium
GPU memory: High
Level caching: Medium
On a 2GB card. The game is on a 2.5" USB3 HDD.

What I can see is LOD and ambient occlusion changing on some objects when I move, but I have to look for it to really notice it.
0 Likes
While you're here, please consider supporting GamingOnLinux on: