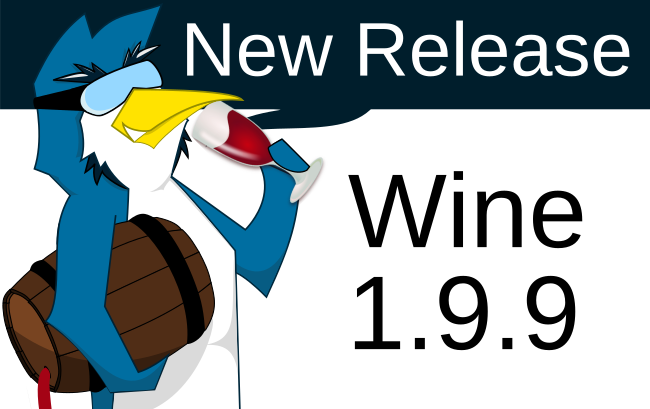 The Wine team released today another development release of their software. Version 1.9.9 has many small changes including 38 bugfixes.

The few most interesting features introduced in this release:


To learn more about this release pleas visit this announcement.

Binary packages should be available for a download as soon as the build process is finished.
Article taken from GamingOnLinux.com.
Tags: Beta, Open Source, Wine
0 Likes
Share

*Translation:
If you do not get the reference, it is your fault not mine.
See more from me
Some you may have missed, popular articles from the last month:
The comments on this article are closed.
5 comments

In other issues sebastian lackner put work on quartz, respect xlive appears middle solution for flatout ultimate carnage and is put on binary folder msvcm80.dll, msvcp80.dll and msvcr80.dll as native for run

View PC info
Is anyone doing regular Witcher 3 tests with the new releases of Wine? I didn't buy the game and there isn't any demo, so I have no idea how far DX11 support has progressed.
0 Likes

Quoting: ShmerlIs anyone doing regular Witcher 3 tests with the new releases of Wine? I didn't buy the game and there isn't any demo, so I have no idea how far DX11 support has progressed.

Don't buy any DX11 game until there will be an overwhelming proof that it works, because right now DX11 support is early in development.
1 Likes, Who?

But in lastest wine some games case dinasty warriors 8, one piece pirate warriors 3 (maybe others) asking for double buffer and now works (and issue in crysis have relation with double buffer)

View PC info
In another test appears other interesting issue, this have relation with run some games from steam

For xlive issue you can use jsMSI Unpacker for extract from xlive redistribuble (this file stay on supported files in game folder): xlive.dll, xlive.dll.cat and xlivefnt.dll, once have this files must be put on flatout binary folder

Or can try test in my dropbox wine fixes folder, in thme have some things for solve some problems

In lords of the rings return of the king appears somthing similar, this time cause delay in audio in cinematics and back fps performance seriously in various temporaly freezes (around 1 to 2 seconds)

But if you run in another console directly game back to runs normally: audio correctly sync with video and fps performance back to normal

In Ys origin appears some similar issue, this time if you runs game with or without console game stay freezes in main menu (around 1 fps maybe less)

But if you have ys origin binary from gog release and runs with other console game runs normally, if try since steam game runs bad again

But in middle of before described situations for example in Ys Oath in Felghana dont occur that, this game can be runs since steam with out problem (except cinematics same problem of ys origin)


Another title affected launching game since steam is alan wake, if you runs since steam fps drop to 2 to 5fps but if you launch another console game back to normally (however needs nodvd for solve too, maybe alan wake binary can works too)


Last edited by mrdeathjr on 3 May 2016 at 5:30 pm UTC
0 Likes
While you're here, please consider supporting GamingOnLinux on: