There's a fork of Wine-Staging that allows you to play Overwatch on Linux, still needs work

It seems someone has forked Wine-Staging adding in all the needed patches for Overwatch to work, so I tested it out.

Thanks to Lutris already having this special Wine build available for use, I decided to borrow my girlfriend's copy of Overwatch to see how far it will go. 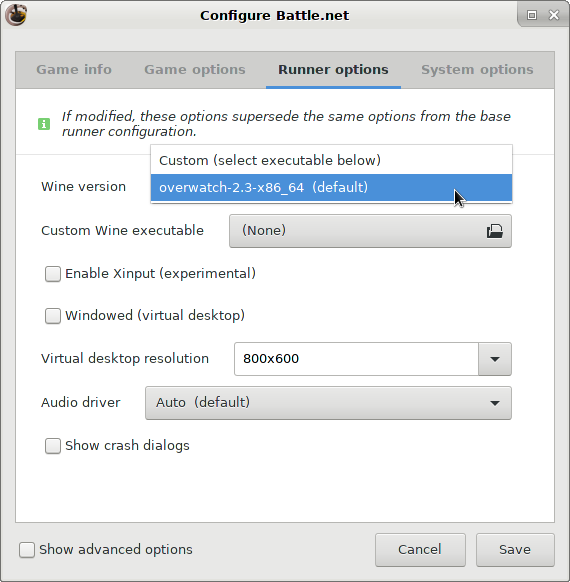 First of all, Battle.net didn't seem to want to let me install Overwatch unless I set my Windows version in winecfg to Windows 10. It kept complaining that I needed a later version of Windows 7, so I guess the version string Wine sets for Windows 7 is too old, or it's a bug somewhere else in Wine.

This shot was taken by me today using this Wine build: 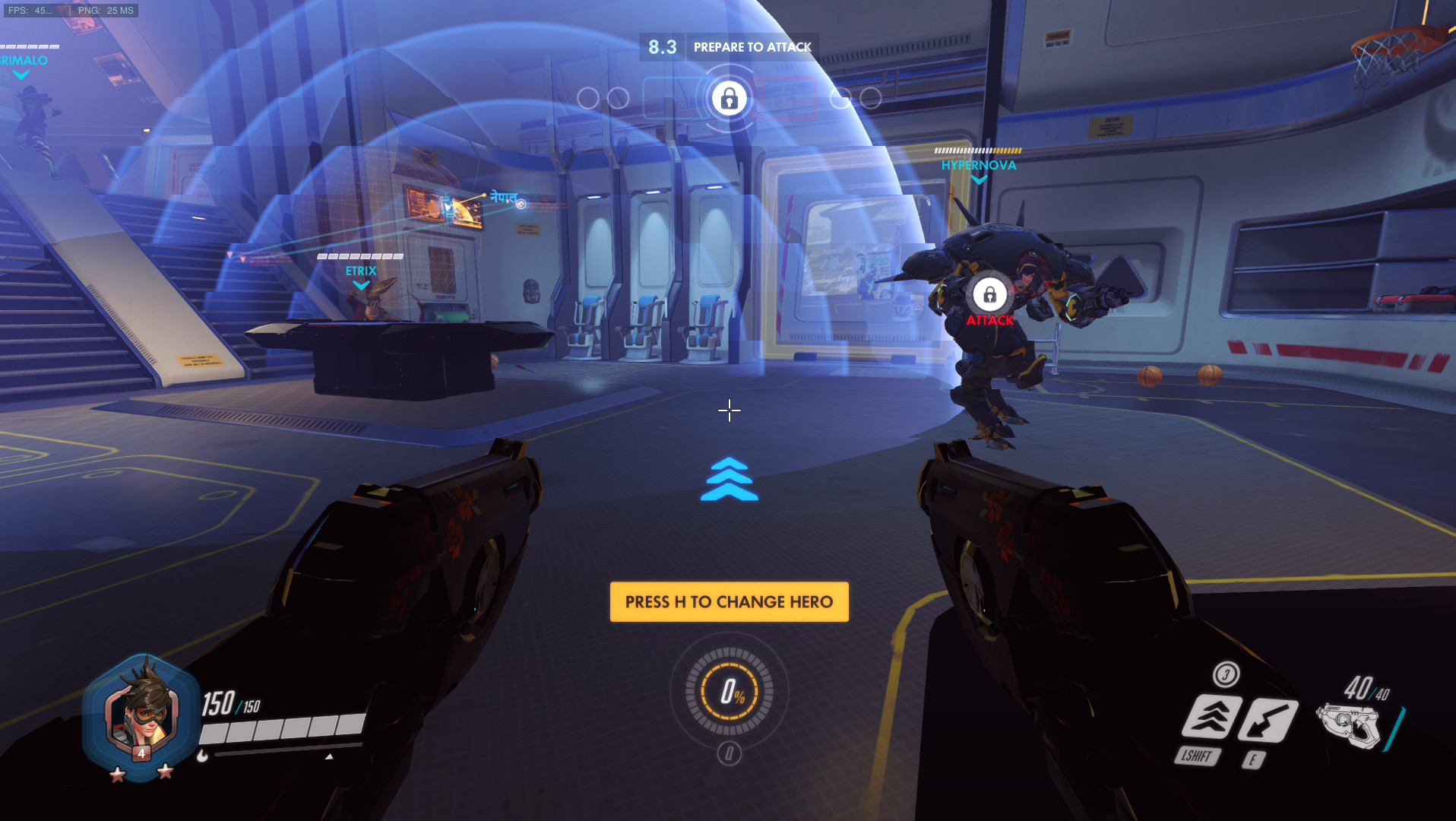 Then after downloading it for a few minutes, I hit play and it does actually work now. On the lowest possible settings the game is mostly playable now. It does stutter here and there, but it's rather impressive. Hopefully the stuttering will smoothen out as Wine matures some more.

You need to ensure that all settings are on Low (otherwise you get black textures). Setting lowest doesn't actually seem to actually change the textures, so you need to adjust them yourself down to Low. Also make sure "Render Scale" isn't set higher than 100%.

The main issue I have, is that each time I spawn I get a mouse pointer and cannot interact with the game. A quick alt+tab and clicking back into the game seems to sort it. That's probably something on my end.

So thanks to "gamax92" for doing the Wine-Overwatch fork, Lutris for making it easily available and everyone else involved in Wine (notably Andrew Wesie for the actual patches) for their impressive work.

Find the Wine-Overwatch fork github here. It pulls in the patches for Overwatch from here.

Hopefully these patches can find their way into the official Wine builds sometime, as then people dual-booting for Overwatch won't need to. I'm not sure what's actually going on with these patches right now in regards to making their way into Wine proper, so hopefully someone in the comments will be able to let us know.

Say what you will about Wine, but it's a fantastic way for more people to dip their toes into Linux without having to give up games that will never come to Linux. My own girlfriend now only has Windows for Overwatch and the day it works properly in Wine, she will likely remove her Windows partition. Article taken from GamingOnLinux.com.
Tags: Wine
11 Likes
Share

We do often include affiliate links to earn us some pennies. We are currently affiliated with GOG and Humble Store. See more here.
About the author - Liam Dawe
I am the owner of GamingOnLinux. After discovering Linux back in the days of Mandrake in 2003, I constantly came back to check on the progress of Linux until Ubuntu appeared on the scene and it helped me to really love it. You can reach me easily by emailing GamingOnLinux directly.
See more from me
Some you may have missed, popular articles from the last month:
The comments on this article are closed.
17 comments
Page: 1/2»
Kuduzkehpan 8 Mar, 2017

View PC info
wine devs are greate ppls they made us to stay on linux until more more linux games pops up.
afther but many developpers are telling gamers to use wine or install windows to play target game. So Wine is a dice for linux gamers. somehow it gives devs choice of "im not care of linux" but also wine also made us to play many many games under linux. meanwhile its the key software for me to play LoL but still i hate and love wine.
2 Likes, Who?

View PC info
Nice to see that EVERYONE is using Lutris :) its great!
4 Likes, Who?

View PC info
I tend to think that Overwatch is one of the "Big Five" games that might hold a person back from ditching Windows. The others would be Skyrim, GTA, CoD, and World of Warcraft. And possibly Battlefront if you're not a CoD person...

I guess some folk would argue that The Witcher needs to be in there too, but I never got into it personally. 10 hours in the first one, 12 hours in the second. I just don't get them.

So, this is pretty amazing. If Overwatch goes gold/platinum under wine, it would join Skyrim and World of Warcraft. That would just leave Call of Duty and GTA. Not sure what their status is on wine?
1 Likes, Who?

Quoting: HexDSLNice to see that EVERYONE is using Lutris :) its great!

I actually only installed it for this purpose, never see a need for it otherwise personally :)
0 Likes

View PC info
Finally I will see you play Overwatch on livestreams.
1 Likes, Who?

Quoting: imdan12Finally I will see you play Overwatch on livestreams.

That's a long time away going by how it runs right now and it likely wouldn't be until it's in at least Wine-Staging directly. On top of that, I don't actually own Overwatch I borrowed the girlfriends copy and I will not buy it until it works damn well as I have plenty of real native games to play ;)
2 Likes, Who?

View PC info
So... unplayable (at least for now). Sadly, that 100% sums up my Wine experience thus far.

Wine is a nice initiative and supposedly works fairly well if you set your mind to it, but I'd more want Wine to be used by the distributors (instead of their own proprietary solutions) as a wrapper for games that will not be (or can't be) ported.
3 Likes, Who?

View PC info
At the moment the only game tempting me to borrow my wife's Windows box is Planet Coaster. But with the recent release of Civ VI, and Feral's promise to patch XCOM2 for the Long War, I should be pretty busy until about 2023. Maybe Wine will have caught up for Planet Coaster by then ;-)
0 Likes

Quoting: dodrianAt the moment the only game tempting me to borrow my wife's Windows box is Planet Coaster. But with the recent release of Civ VI, and Feral's promise to patch XCOM2 for the Long War, I should be pretty busy until about 2023. Maybe Wine will have caught up for Planet Coaster by then ;-)

Feral have already done the XCOM 2 patch :), was back in early Feb.
0 Likes

Quoting: liamdaweFeral have already done the XCOM 2 patch :), was back in early Feb.

Sweet pumpkins! I was on holiday then so missed the announcement, but in any case figured that by the time I got bored of Civ VI The Long War would be ready for me.
1 Likes, Who?
1/2»
While you're here, please consider supporting GamingOnLinux on: