There's A Possibility Of Just Cause 3 Coming To SteamOS/Linux 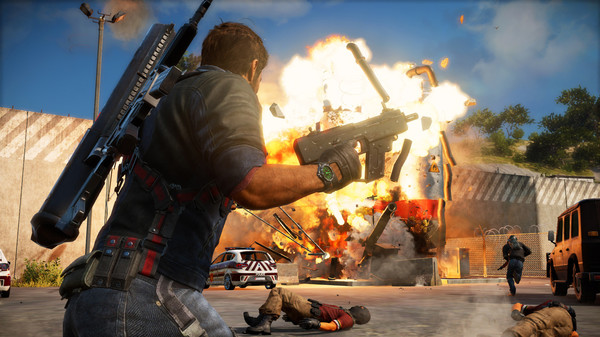 A recent Polygon article that covered Valve's new hardware has some information from Valve, and it's not entirely clear, but it looks like Just Cause 3 could come to Linux.

To quote Valve from the piece:


Erik Johnson, ValveThe range of games is triple-A titles like Just Cause 3 that are multiplatform, all the way back to games like System Shock 2 and Half-Life. The idea that we'd be playing those games in the living room with a controller was not something we had ever considered. We had to solve all the problems there.

Robin Walker, ValveWe talked to Avalanche Games to see if we could show Just Cause 3, which is not out yet.

They don't specifically mention SteamOS, but this is an article talking about the Steam Machines and SteamOS, and it's under the Games section. It's easy to assume they mean it will see a SteamOS/Linux release, but it's too unclear to be solid.

I'm pretty excited at the possibility of it, as the game looks fantastic, but for all we know they could have been testing out the Streaming ability at this point. It would be a huge title to have though, that's for sure and I would personally buy it out of interest if it does come out for us.

About Just Cause 3
The Mediterranean republic of Medici is suffering under the brutal control of General Di Ravello, a dictator with an insatiable appetite for power. Enter Rico Rodriguez, a man on a mission to destroy the General’s hold on power by any means necessary. With over 400 square miles of complete freedom from sky to seabed and a huge arsenal of weaponry, gadgets and vehicles, prepare to unleash chaos in the most creative and explosive ways you can imagine. Article taken from GamingOnLinux.com.
Tags: Editorial, Steam
0 Likes
Share

View PC info
I'm not about to click on a Polygon link, but I do hope this turns out to be true. Just Cause 2 was freakin' awesome and I expect 3 to be just as crazy.
4 Likes, Who?

fscherrer 22 Oct, 2015
View PC info
I think Just Cause 2 is the game I've spent more time on. I'm buying JC3 the day it's released for GNU/Linux / SteamOS, no matter the price.
2 Likes, Who?

View PC info
This would be awesome, I loved Just Cause 2 and played it for countless hours. Too bad it doesn't work with Wine.
0 Likes
mao_dze_dun 22 Oct, 2015
I've spent 70+ hours playing jc2. Such a fun game. Never finished it though - story was idiotic.
0 Likes

View PC info
In one of the articles I read - I forget where - it said that Just Cause 3 was demo'd via in-house streaming. I'm keeping my hopes very, very low. But damn if I won't buy the shit out of it if it does come to Linux!
1 Likes, Who?

edo 22 Oct, 2015
View PC info
This game is being optimized for the steam controller, so maybe if they are so involved with valve they may create a linux port. But lets remember than on the steam community they said time ago than they didnt had planned any linux or mac version at the moment.
0 Likes

chipgw 22 Oct, 2015
View PC info
This would really make my day! I tweeted them a while back and they said they had no Linux plans, but it's possible things have changed since then...
0 Likes

Segata Sanshiro 22 Oct, 2015
View PC info
That would be nice. Played the original two games on console and enjoyed them a lot.
0 Likes

View PC info
My wallet protests! I on the other hand think this is great news! :)
1 Likes, Who?
1/3»
While you're here, please consider supporting GamingOnLinux on: