It's now confirmed that Rob Wyatt, someone who Atari made a big thing over joining them has quit citing non payment of invoices for at least six months.

As confirmed by The Register who spoke to Wyatt, things have not been going well. Not only has Wyatt completely left the project, it sounds like Atari don't exactly know what they're doing. Originally, Atari said it would have their own Linux-based OS with an easy to use UI and their own store. According to sources The Register spoke to who've had direct contact with the VCS project, that might no longer happen. Sounds like it's turning into a regular Linux box now.

No game developers have signed up to make original games, which is something I expected after their first announcement about actual games years after the IndieGoGo crowdfunding campaign was a retro streaming service. On top of that, they've not been able to pull in the big game engines like Unreal or Unity too.

Remember Atari also said they would fully support streaming services? Apparently that's not even happening either. Instead, you will be running services like Netflix or Amazon through a special build of a Chromium-powered browser. The whole Register article is worth a read, as it's really something. 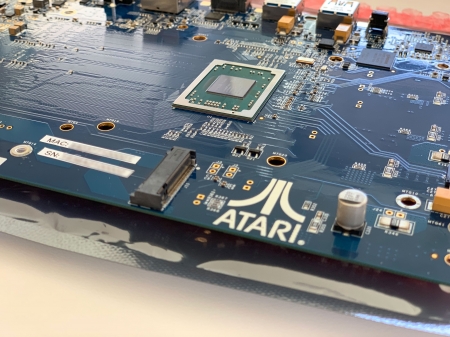 Meanwhile, Atari have also put out their own update post on the same day likely trying to bury this bad news. It doesn't actually give us anything new, in fact it basically confirms have Atari don't really have anything to show. They explained that the pre-production Atari VCS units can run both Windows and Linux and that's about it right now.

The VCS team do claim they will be able to show their own UI, store frameworks and apps and more actually on a VCS unit to "a select group of press and partners" later this "fall". They also said they're still looking at a retail launch in "spring 2020".

I will be seriously amazed if they actually hit that goal. I still want them to, for everyone that backed them and to have a nice tidy Linux-powered box available like this would be pretty sweet. Let's see what happens but it's really not sounding good.

Article taken from GamingOnLinux.com.
Tags: Hardware, Misc
23 Likes, Who?
We do often include affiliate links to earn us some pennies. We are currently affiliated with GOG, Humble Store and Paradox Interactive. See more here.
About the author - Liam Dawe

I am the owner of GamingOnLinux. After discovering Linux back in the days of Mandrake in 2003, I constantly came back to check on the progress of Linux until Ubuntu appeared on the scene and it helped me to really love it. You can reach me easily by emailing GamingOnLinux directly.
See more from me
Some you may have missed, popular articles from the last month:
27 comments
Page: «2/3»
vector 8 Oct, 2019

+1 for use of sarcasm online without a corresponding tag.
10 Likes, Who?

macintuxNot trying to sound rude or anything, but, why do you keep giving them your money? All it does is encourage bad behavior and poorly planned out ideas like the Atari VCS.

If I think the campaign seems fanciful, over-hyped, is just plain BS, or this is their first one I would steer clear. For example, I did not back Atari VCS.

My point about no expectation, was that I recognise that software and hardware is hard, and that despite the best intentions, the project may fail to deliver. In the case of a sole developer, they may have massively understimated the time to deliver, or suffer burnout. Some games still deliver, but many years after they promised. I don't get angry about this.
11 Likes, Who?

Anything wrong with being a consumer?
0 Likes

View PC info
Can it run SteamOS? Thinking if 'Worst Case Scenario' i might be able to buy it off someone and turn it into a SteamBox~
1 Likes, Who?

KimyrielleThe only people I feel more sorry for than than the one who backed this project, are the ones who washed hundreds of dollars down the drain to buy starships for a certain space game that will arrive not before the end of their life-expectancy...

Ouch.
Really curios if i see the blow out of said game in my life time.
0 Likes

Anything wrong with being a consumer?

With the current atari's (infogrames) track record (both in crowdfunding and their history in milking nostalgia with manure), this was rather a likely outcome.

View PC info
From my understanding of it, Rob Wyatt had left long ago, or was useless for a long time? Maybe that is just from the angry people on AtariAge, not sure.
0 Likes

View PC info
So it's heading the same way as the attempt to revive old times with the Amiga One: hyped at the beginning, delayed for several times and at the end nothing noticeable remaining...
Though some more big players on the market would clearly help to push towards more platform independence in general, it seems that the stakes have gotten way to high for someone new to show up in the near future.....
0 Likes
«2/3»