Thoughts on 'Stellaris' with the 'Leviathans Story Pack' and latest patch, a better game that still needs work

Since the new DLC and patch I’ve put a further load of hours into the game to get a feel for some of the changes, and to point some things out.

Note: Game and DLC provided to me by Paradox directly.

The game feels different, not massively different, but overall it feels like it has a lot more polish than the initial release. The early game is still rather slow (and a little dull when you’ve put lots of hours into it), I feel like the starting hour or two needs more random events to keep people interested enough to see it through. You are, after all, a civilization just beginning to explore the stars.

One of my gripes with the game was how none of the ship classes really felt different, they all felt like bigger versions of the previous class. This has been completely wiped away with the recent patch! Each class now has an actual dedicated role, which brings in more strategy towards building up your fleets and actually makes the smaller hull sizes still useful in the later game. Being included free in the patch was great, but obvious really as such an overall game-changing feature couldn’t really be put into a DLC as it would make it a mess to balance if it was a DLC feature. 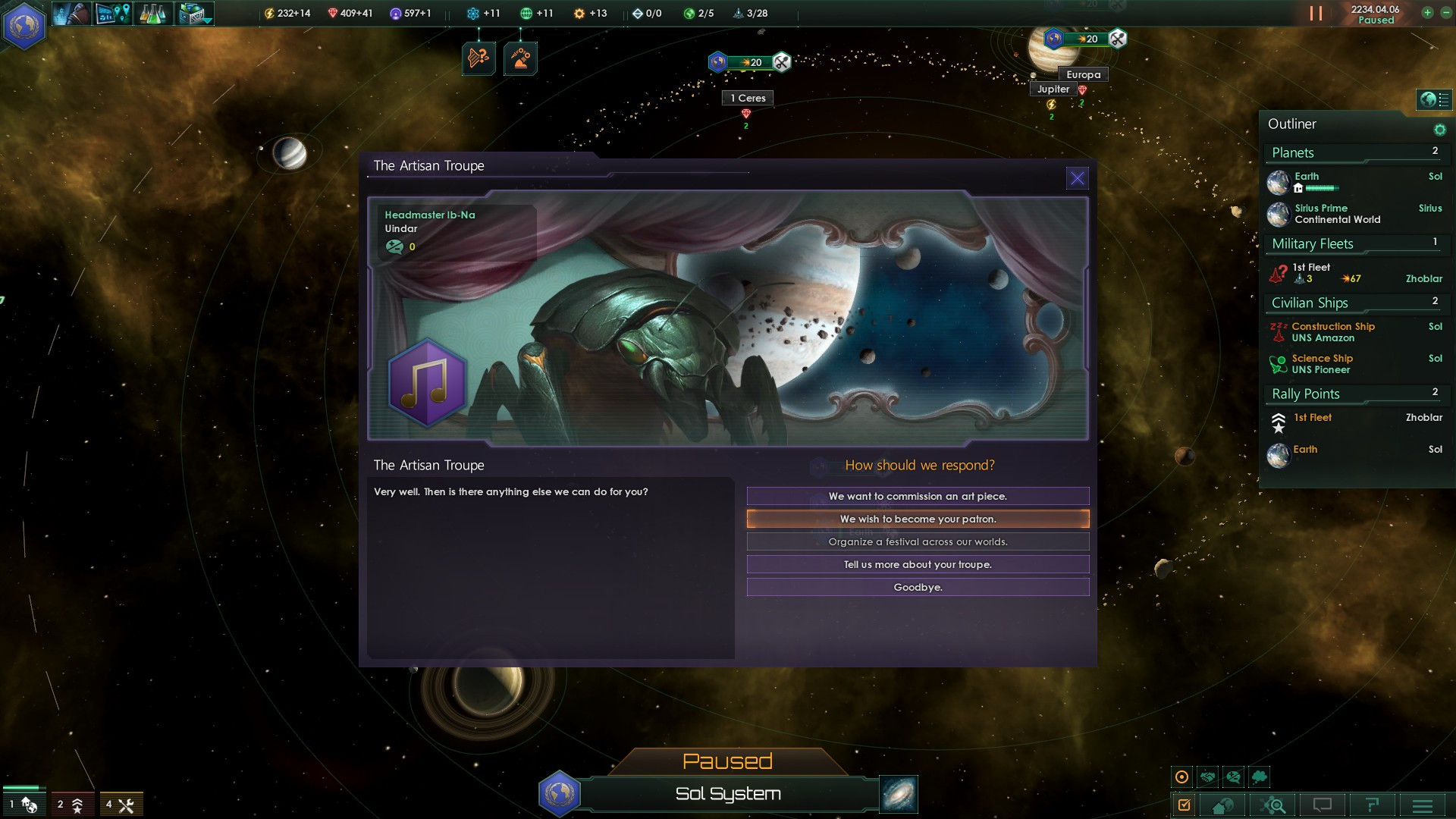 The new Enclaves feature, where you come across independent trading outposts is incredibly useful. I came across one rather early on (about an hour in) and I was able to dispose of a lot of my unneeded energy in favour of minerals. That’s a game changer to be able to do so easily, as it enabled me to build a decent fleet in the early-game. I find Stellaris too easy to build up a massive storage of energy credits, so the Enclaves are a really great addition for me personally.

You can also hire them for other things, like becoming an artist's Patron. Doing so will cost a lot, but the rewards can be ideal: such as gaining influence by donating to them when they require it.

The massive space creatures are great, they really do spice the exploration up a bit and damn they look impressive. 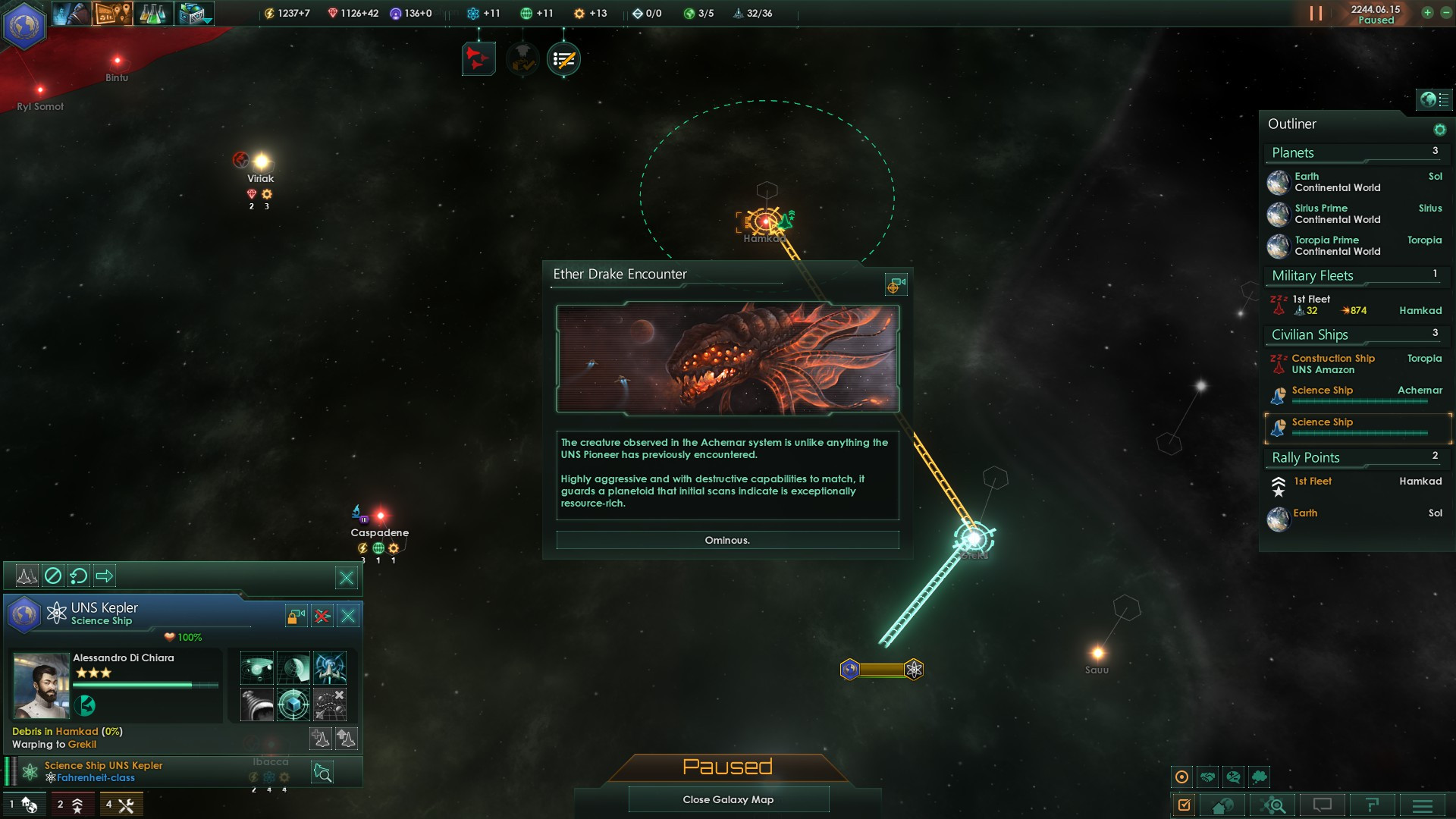 It's quite hilarious really, as fleets and enemies generally have a fleet power number associated with them, but space creatures just have a skull, and damn they are strong. 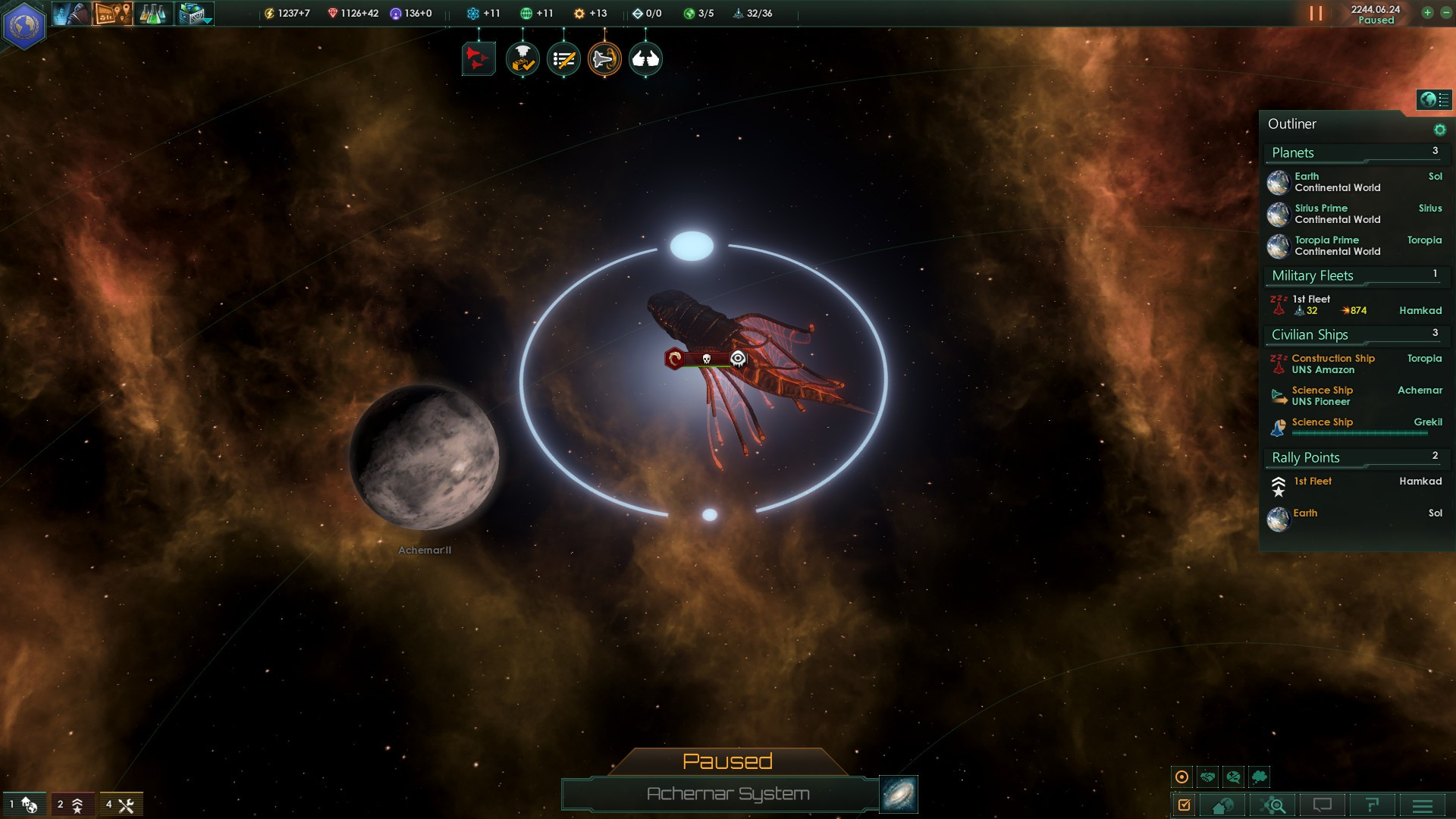 The truth is, it was damn hard to get a feel for the new end-game ‘War in Heaven’ feature, due to how many hours you have to put in to come across it. My first attempt ended rather abruptly as two AI’s either side of me suddenly allied against me and declared war—whelp! I am still going in my second playthrough, but I feel as if I’m still not even close to it, so it may be many more hours until I can get a look at it, and it may not even happen.

The problem with the Leviathans Story Pack is that you need to have a good number of hours into a game until you really get anything from it, so it’s really a DLC meant for the most dedicated of players. I am looking forward to seeing more content provided for the early to mid game experience.

One thing the game really needs to focus on is the combat, currently the combat is extremely basic and that’s still being quite generous to it. For a game that’s done in real-time, this one part of the game seems to have been given such little focus. Even some extremely basic tactics or special weapons on a cooldown would certainly give it some more feeling, other than just watching the fireworks.

I do still get the feeling that the game is a little empty, which is realistic really as space isn’t really filled with all that much, but I still feel like as a game, that Stellaris needs more of everything. In a single game I’ve seen the exact same anomalies to research multiple times, which can make it feel a little stale at times.

Each update continues to refine the gameplay, the user interface and just make it more fun to play overall. Paradox’s commitment to big free patches alongside their DLC still continues to impress me.

View PC info
More random events in the beginning? Hell, it'd make it even worse for those who've never played a Paradox title before ^^
1 Likes, Who?

Mountain Man 27 Oct, 2016
View PC info
Paradox's grand-strategy games have always been a bit sparse in terms of combat mechanics (with the possible exception of the Hearts of Iron series), so Stellaris' combat is exactly what I would expect from a Paradox game.
0 Likes
Mal 27 Oct, 2016

The perspective of the game is the one of the ruler, not the general. That's why combat is "abstracted away". As a ruler you give order to your officials and they carry them on.
I for one I'm fine in sending fleets around and let them autonomously engage the enemy.

Than the game already has a good deal of micromanagement between the science chooser and ship builder. You can make design to counter specific threats but this is not really obvious for the new player, although I appreciate the idea that (random) different choices in tech and weapons can determine success or failure in war depending on the (random) choices made by your enemy.
1 Likes, Who?

View PC info
As a ruler, i feel i still don't have much to do, even with the DLC. I bought it Day 1 to support the game, because all i want is HoI/EU/CK with a non-historic base. So far, they didn't deliver. Yet ?
0 Likes
posmunk 27 Oct, 2016

Wonderful DLC - the game feels much more polished and complete. Best thing: they changed so that you can colonize all planet types without special research!
1 Likes, Who?

Quoting: Mountain ManParadox's grand-strategy games have always been a bit sparse in terms of combat mechanics (with the possible exception of the Hearts of Iron series), so Stellaris' combat is exactly what I would expect from a Paradox game.

That's what I was thinking. At the grand strategy level you're two or more levels removed from tactics, so they've never been a big part of Paradox's grand strategy games (with the possible exception of Hearts of Iron, which I haven't played [yet]).
0 Likes

Quoting: Mountain ManParadox's grand-strategy games have always been a bit sparse in terms of combat mechanics (with the possible exception of the Hearts of Iron series), so Stellaris' combat is exactly what I would expect from a Paradox game.

Every game should have mechanics that makes sense for them. Given Paradox games like EU, CK, Vic and HoI, combat mechanics made sense given their aim and amount of attention you were forced to pay them. That is, rather simplistic but sufficient in EU, where a bit thing is position and terrain, but at the same time, diplomacy plays huge role. In CK, it is more about people management and if you are even able to afford such troops. Leadership plays major role in this game. I haven't played Vic a lot, but as economic simulator of industrialism, it was heavily dependent on goods that you can produce, as each unit consumed slightly different type of goods. HoI is and was all about warfare, so it makes sense that it has detailed combat mechanics.

Saying that Stellaris is expected to have simplistic combat because it is from paradox is complete misunderstanding. Paradox games had sometimes simpler combat mechanics because all the attention was in interactions with other nations/your lords/your factories.

Stellaris doesn't have that. Ergo simplistic mechanics are problem, namely when system pretends that it has depth (tons of technologies, various ship classes, customization of ships).
0 Likes
thegh0st 27 Oct, 2016

View PC info
Stellaris is a nice game but a lot of areas need some polishing.
Heinlein improved a lot areas, unfortunately a lot of things broke with the new patch. They really need to improve their QA.
The good thing is, the game has a long way to go and developers are dedicated to it as long as they make money with DLCs.
0 Likes

View PC info
This is te BEST strategy game ever!
1 Likes, Who?

View PC info
This is my "game of the year" so far this year. I'm really enjoying it and the Leviathians DLC makes it even better.
0 Likes
While you're here, please consider supporting GamingOnLinux on: