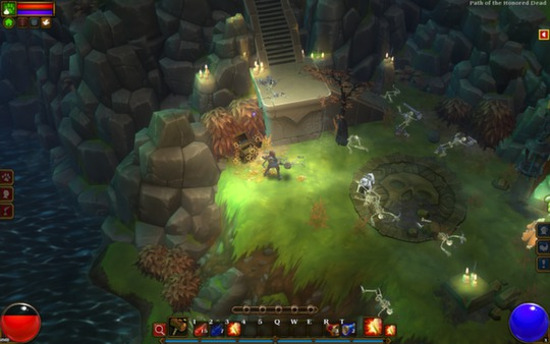 Morning! We begin today with some big news folks. It looks like both Torchlight & Torchlight II are due to be released on Steam for Linux.

We recently ran an article wondering what happened to Torchlight Linux, as it seemed to be forgotten about, so be sure to read up on it.

The first Torchlight game came to Linux as part of a Humble Indie Bundle 6, but it never made it onto Steam for unknown reasons. So, if this turns out in our favour then people who missed out will not only be able to get the first game, but the rest of us will be able to play the second too.

For those that don't know the Torchlight games are action RPG games that are commonly compared to games like Diablo. They are good fun, and easy to get into.

Both of the game have recently been updated on SteamDB to show this:

And then there is Torchlight II

This isn't confirmed yet, but it's great supporting evidence.

*sniff* *sniff* I think I can smell a new Humble Bundle brewing don't you? It's been a few months since a new Humble Indie Bundle was launched and I imagine Torchlight II would be a decent game to include for Linux & Mac gamers especially. Article taken from GamingOnLinux.com.
Tags: Action, RPG, Steam, Upcoming
0 Likes
Share

View PC info
Wow, Thanks everyone for your comments, it's much appreciated :)
Based on everything you are saying I will probably give Torchlight II a try.
Thanks again for all your answers !
0 Likes
FutureSuture 16 Jul, 2014

View PC info
Torchlight 2 with the synergies mod is worth playing. It's bigger, random, more content and densely populated with trash and PVE to fight. You are constantly pulling.
0 Likes

View PC info
I missed the HIB with TL1 in it, but I found an official HIB torrent for it out of curiosity, I liked the game, but it had too many bugs in the version that I had found. If this is true that both games are coming to Steam on Linux count me as one of the first to buy both as I love this style of game.

Though the problem is what gear to hold on to and what to get rid of... I always had so much equipment, but never knew what to sell and what to upgrade as often as soon as I would get stuck and upgrade an item I'd get a mob drop in the next dungeon that blew it out of the water...
0 Likes

View PC info
I've played a lot of Torchlight II on Steam for Windows via wine. It's bigger and better than the first, and the bottom line is that if you liked the first one, you'll like the second one even better.
0 Likes

View PC info
I can not wait!
0 Likes

LowEndGeek 21 Jul, 2014
View PC info
I've beaten the ever lovin hell out of the first one but it doesn't matter. It's still one of my favorite dungeon crawl, hackie slashie games and this is great news.
0 Likes

View PC info
when when when when?????? i cant wait
0 Likes
«2/2
While you're here, please consider supporting GamingOnLinux on: