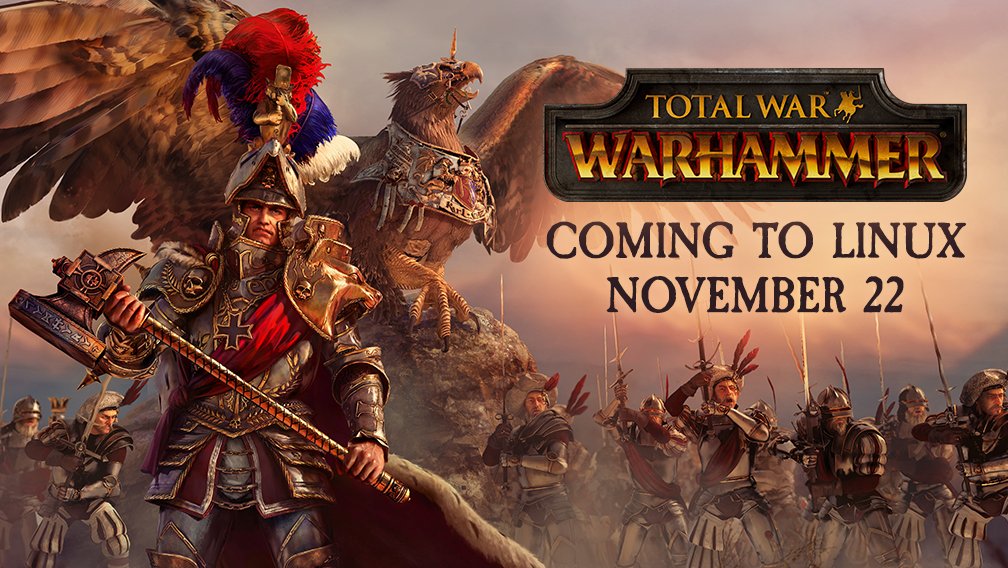 It releases on Tuesday 22nd of November, so not long to wait at all! It's another title from Feral to come to Linux first, as the Mac version has seen a delay.

I will hopefully have an overview of the Linux version ready for release day, stay tuned!

About the game
The Old World echoes to the clamour of ceaseless battle. The only constant is WAR!

Command four wholly different races: the Empire, the Dwarfs, the Vampire Counts and the Greenskins, each with their own unique characters, battlefield units and play style.

Lead your forces to war as one of eight Legendary Lords from the Warhammer Fantasy Battles World, arming them with fabled weapons, armour and deadly battle magic; hard-won in individual quest chains.

For the first time in a Total War game, harness storms of magical power to aid you in battle and take to the skies with flying creatures, from ferocious dragons and wyverns to gigantic griffons.


Are you looking forward to it? Will you be picking up a copy? Let me everyone know, comment away! Article taken from GamingOnLinux.com.
Tags: Feral Interactive, Strategy, Upcoming | Apps: Total War: WARHAMMER
3 Likes
Share

View PC info
Im looking forward to this one, I enjoyed previous TW games and one in the Warhammer Universe look amazing. However my only reservation is they have yet to announce if it will support cross platform multiplayer with windows (Which is a must really).

Also when TW:warhammer was announced, you could get the Chaos Warriors pack for free as a bonus for pre-ordering / if you bought within a week of release. Haven’t heard anything about if that offer will be made to Linux buyers as well.
1 Likes, Who?

Quoting: cdnr1any news if its going to support vulkan ?

Pretty sure we can say it wont; Feral said their first Vulkan games wouldnt be until at least early 2017. (This was from their Deus Ex stream.)
5 Likes, Who?

View PC info
this is the only total war game that i care about, cause of warhammer fantasy setting :)

anyway i still hope for Dirt Rally :( where is it?
2 Likes, Who?

View PC info
I didn't think we'd see the day that a Total War game comes to Linux before the MAC. This blog post from Aspyr seems to sum up the situation well though: https://blog.aspyr.com/2016/11/01/state-mac-gaming/

Anyway I'm getting this for sure - I've been drooling over it long enough.
1 Likes, Who?

View PC info
I have to say the pace at which Feral Interactive is porting these games with most being dual ports (Linux & MacOS) is very impressive. I really hope they keep this pace and that they continue to get third party developers and publishers who want their games ported so that they can keep this pace. Well done Feral!

That being said I wonder what exactly Aspyr is up to? I mean other than Civ VI which is Mac only, the last game they did that was a dual port was Layers of fear and that some time ago.
3 Likes, Who?

View PC info
Instant buy for me - although, without being able to play cross-platform wide would mean one friend less to play with - for everyone undecided yet:
View video on youtube.com
0 Likes

Quoting: FredOI didn't think we'd see the day that a Total War game comes to Linux before the MAC. This blog post from Aspyr seems to sum up the situation well though: https://blog.aspyr.com/2016/11/01/state-mac-gaming/

Anyway I'm getting this for sure - I've been drooling over it long enough.

Haha what are the odds I was reading the exact same post just now and even thought of adding it to my comment :)

I have to say recently I've been more upset with Apple and Mac than what I am with Microsoft and Windows. Vulkan had a real shot of being the hands down graphics API of choice for all games fullstop. With DX12 being Win10 only and Vulkan being cross-platform across all systems including Windows up to XP, Vulkan could have been the one reason we saw a lot more PC game releases (Linux, Win, Mac).

However with Apple choosing to block Vulkan and have this Metal crap on their systems, they have effectively created this wonderful divide, again leaving us all back at square one. So devs are going to do the following: Vulkan or DX12 for Windows? Lets go with DX12 besides we don't really wanna support Android and Linux isn't really a deciding factor. Besides if we decide to go with a Mac version aswell we have to use Metal so there really isn't any need for Vulkan. And thanks to Apple that is where it ends. No Linux version once again.
4 Likes, Who?

View PC info
Another good title on approach from Feral :) I'm also hoping for dirt rally. On the windows version of the early access, there was some gnu/linux terms in the contract. Was it planned from the beginning? If it is the case it would be a good port idea, because game runs great on windows and a 20% perf drop would not be much of a deal. And we would have one of the best rally game ever made on linux. ^^

For vulkan we have to wait a bit more I think. They talk about implenting in during 2017, it may be only the second half of 2017. I don't mind whenever it is, I know feral will make good use of it once they are ready.

View PC info
We can expect some lull after Total War is released. It's Spacious Skies and the infamous Depth Charge on the radar and then nothing.

So, I might be actually able to complete all recent Feral titles before the next wave comes :)

BTW, Warhammer Fantasy (2nd ed) is the only roleplaying game I still play - I absolutely love the setting. I played Warhammer Online till the day they shut down servers. An awesome and underrated setting.
1 Likes, Who?
1/4»
While you're here, please consider supporting GamingOnLinux on: