Tower of Elements 2 for Windows, Mac, and Linux On Kickstarter

ToE2 is a real time strategy and puzzle game with deep city building and match-3/tower defense combat. Lead your kingdom to glory! The good news is it has already been funded! 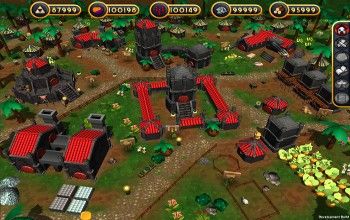 Tower of Elements 2 (ToE2) is a real time strategy and puzzle game with deep city building and match-3/tower defense combat. From your capital city you lead your Kingdom against the invading Void Army that threatens all life.

Your strategy, tower defense, and match-3 skills will determine the fate of your armies, but the many political decisions you make as a leader affect the story and the culture of your kingdom.

As your capital city improves, you will have access to more powerful spells, mightier elite troops, and better battlefield gear and armaments.

Along the way you will also earn achievements, complete quests, and fill your Bestiary with enemies.

This isn't the first Kickstarter that frogdice have done either, they are the guys behind Dungeon of Elements which hit it's goal and is out in the wild now.

Looks pretty garunteed as well, they have already hit their goal and the game isn't too far off completion:

Quote1) The game is near completion. It is approximately 2 months from beta and 3-4 months from public launch.

2) Frogdice has multiple successfully launched titles and a 17 year history of quality and dedication to its games.

3) This is our second Kickstarter campaign. Our first one delivered on time to the enjoyment and satisfaction of our backers.

They are looking to get onto Steam as well, so if you like the look of it and use Steam go ahead and give them a vote on greenlight.

What do you think GOL gamers?

View PC info
Liam, I thought we all disliked the "PC, Mac, and Linux" mantra. I also thought you at least had the power to say "Windows, Mac, and Linux" on your own website!
0 Likes
Frogdice 11 Dec, 2013
View PC info
Thanks so much for this news update. Linux gamers have been awesome to us and we are thrilled to return the favor.

Our goal is to make sure every PC game we make is also available for Linux.
0 Likes

Quoting: Quote from FutureSutureLiam, I thought we all disliked the "PC, Mac, and Linux" mantra. I also thought you at least had the power to say "Windows, Mac, and Linux" on your own website!

Indeed I hate Linux being separated like that, it was my tired brain doing a copy/paste.

Quoting: Quote from FrogdiceThanks so much for this news update. Linux gamers have been awesome to us and we are thrilled to return the favor.

Our goal is to make sure every PC game we make is also available for Linux.

Quoting: Quote from liamdaweIs there a reason you use PC for Windows?

I am so glad you asked me that because the funny thing is, I actually wasn't using PC to mean windows there. Normally I do, because as stan said above, there are a lot of people who actually get thrown by "Windows" rather than PC. When one says "This is for Windows" somehow they all of a sudden start worrying about what version or what do I mean by that, etc. But when I say "PC" they feel safe.

That is why the title of our Kickstarter project is: "Tower of Elements 2 for PC, Mac, and Linux"

On web pages where we sell our games, we usually use "PC/Windows" to try and clarify things for everyone. For example:

When I was typing that message here, I thought to myself "For once, since I am posting on a Linux site, I can say 'PC' referring to Personal Computer and everyone will know what I mean."

To say it in another way: our goal is for every game designed for ANY type of Personal Computer, we intend to support Linux as well as Windows and Mac.

There is another reason I often use "PC/Mac/Linux". It is shorter. And in the day of Twitter and its obnoxious 140 character limit, the extra 5 characters is huge.
0 Likes
While you're here, please consider supporting GamingOnLinux on: