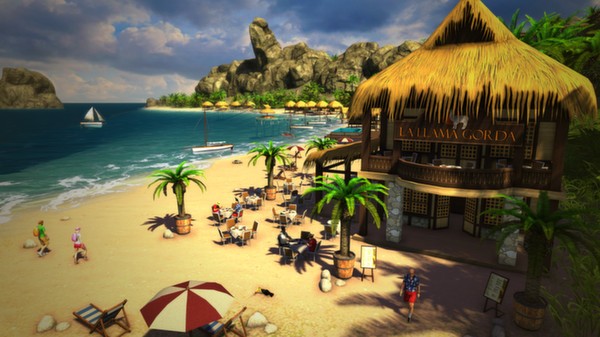 Tropico 5 has finally been officially release for Linux, so it's time to become a dictator and see how it runs on Linux.

This is the first game in the Tropico 5 series to be official supported on Linux, so be sure to pick up a copy to show your support.

My Initial Thoughts
I've played around with it for a bit now and it's a pretty fun game that is amplified by the possibility of multiplayer. It will have a few rough edges being a brand new port, so I am willing to overlook minor niggles for now.

It does have a few issues like alt+tab seemed to crash it for me, and setting post-processing to "high" makes the game turn blue. The alt+tab issue is highly annoying, as it only seemed to crash doing it once, so just a teething issue.

When launching the campaign and customizing my dictator I also don't seem to get any preview, just a box with features to change and a black screen behind it, so I assume there should be a changing face there of some sort.

My game-pad seems to be picked up properly and makes playing it on my big screen from across the room a pleasure. Although one minor issue with the game-pad is it wouldn't let me save the game, it's supposed to let you press A, but it wouldn't pick it up, but pressing ENTER on the keyboard seemed to work fine.

I seem to be a terrible dictator with a really bad habit over spending money I don't have, and I don't think his majesty approves of my bank breaking methods. I just wanted to grow lots of crops...

If you like city building with a bit of comedy and just being a little different be sure to check it out.

Official About
Return to the remote island nation of Tropico in the next instalment of the critically acclaimed and hugely popular ‘dictator sim’ series. Expand your Dynasty’s reign from the early colonial period to beyond the 21st Century, facing an all-new set of challenges, including advanced trading mechanics, technology and scientific research, exploration and for the first time in Tropico history – cooperative and competitive MULTIPLAYER for up to 4 players.

I am the owner of GamingOnLinux. After discovering Linux back in the days of Mandrake in 2003, I constantly came back to check on the progress of Linux until Ubuntu appeared on the scene and it helped me to really love it. You can reach me easily by emailing GamingOnLinux directly.
See more from me
Some you may have missed, popular articles from the last month:
The comments on this article are closed.
38 comments
Page: 1/4»
ElPolloSantos 19 Sep, 2014
So far it's running great, no bugs that I have detected and it's running flawlessly on my system even through Bumblebee on ultra settings. Only done the tutorials so far but as a long time fan of the series it's good to see a strong native port for Linux.

I'm sure it will run smooth on slower systems as well.
1 Likes, Who?

View PC info
i fear steamsales and humblebundle have spoiled me, i look at that price and tell myself "lets put this on a list and buy it for -75% later". theres are still so many titles from humblebundles and sales to play that i never really feel the need to buy anything new - the surplus of games is just overwhelming and theres always the next wave of discounts nearby.
6 Likes, Who?

View PC info
Hmm - I'll wait until a few patches has ironed out the quirks.

But that's all sweet - gives me more time to play Wasteland 2 in the meantime. :)
3 Likes, Who?

kalin 19 Sep, 2014
View PC info
I bought one :)
1 Likes, Who?
ElPolloSantos 19 Sep, 2014
True, but you still don't see many high profile "AAA" if you will games out there and we want to encourage them to do more. Waiting for a sale is nice, but it doesn't encourage future ports. If I was still dual booting I would agree 100% but I want a few more games beyond the typical Indie fare (like films they are often great, but I like the occasional big budget blockbuster as well).
4 Likes, Who?

View PC info
Is it working well with the mesa drivers? Just wanted to know, but I guess I'll be able to give it a try it later today.
0 Likes

QuoteTrue, but you still don't see many high profile "AAA" if you will games out there and we want to encourage them to do more. Waiting for a sale is nice, but it doesn't encourage future ports.

That's very true, but in my case considering I paid full price for Tropico 3 & 4 on the 360, I just don't want to pay £35 for a game which sees pretty small changes between each iteration. Don't get me wrong, I think Tropico is great fun and if I hadn't paid so much for the other two, I would be more willing to pay the full £35. Even the 15% off they had for pre-orders would be enough for me to get it now.
0 Likes
GoCorinthians 19 Sep, 2014
View PC info
Thats why I love european devs and their awesome feeling games! Presidente FTW!

Any issue with this game and AMD CPUs ?
0 Likes
neokiva 19 Sep, 2014
I am going to buy this i am so sick of hearing the only 1 or 2 % marketshare (not to mention those surveys either have errors or biased) argument used to justify mmos and other decent games not coming to linux. guys if you can please pay full price. this will benefit us and others in the future.
3 Likes, Who?
1/4»
While you're here, please consider supporting GamingOnLinux on: