For those of you into the classics, Turok 2: Seeds of Evil has today been officially released for Linux. 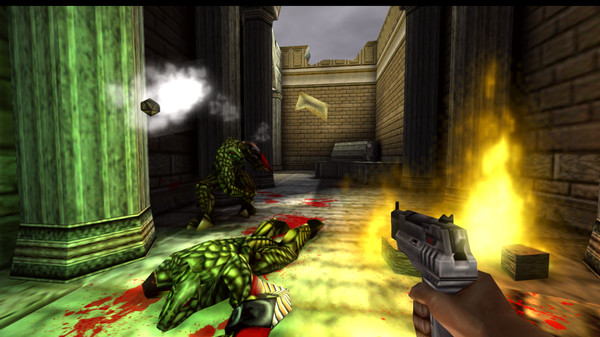 As a reminder, this isn't the original Turok 2 but an enhanced version from Nightdive Studios that was ported to Linux by Ryan "Icculus" Gordon in beta form back in July.

Turok 2: Seeds of Evil returns to the PC! The sequel to the hit game Turok is now available, featuring a host of enemies, weapons, missions, locations and a new multiplayer mode. Remastered for today’s computers using a new engine with improved graphics, Turok 2 will transport players into sprawling environments with vicious enemies lurking behind every corner.

For those who played the original, you can expect to find: 64bit support, new multiplayer options, a new UI system, updated maps, improved AI and quite a bit more. Nightdive Studios certainly do put in the effort for their updated releases, good to see more of them land on Linux officially.

The Linux build is not currently available on GOG for now it's only on Humble Store and Steam.

Icculus also mentioned on his Patreon post, that he has "more games that I can handle right now" so it looks like the Linux porting business for him is going strong. He did note that some won't be quick and simple, but it will be worth the wait by the sounds of it.

Article taken from GamingOnLinux.com.
Tags: FPS, Steam
19 Likes, Who?
We do often include affiliate links to earn us some pennies. We are currently affiliated with GOG, Humble Store and Paradox Interactive. See more here.
About the author - Liam Dawe

I am the owner of GamingOnLinux. After discovering Linux back in the days of Mandrake in 2003, I constantly came back to check on the progress of Linux until Ubuntu appeared on the scene and it helped me to really love it. You can reach me easily by emailing GamingOnLinux directly.
See more from me
Some you may have missed, popular articles from the last month:
The comments on this article are closed.
29 comments
Page: 1/3»
Whitewolfe80

View PC info
I believe Freedom Fighters is one of them he did at one point have a list but its not around on his site anymore he was talking on twitter about the games he has on his list to port had very little chance to be huge commerical sucess which is why he was happy about his pateron funding.

View PC info
Great:) Hope he will also make a remaster of Shadow Man.
3 Likes, Who?

edo 12 Sep, 2018
View PC info
I tough he wasn't porting games anymore, since he was focused on SDL2 and stuff.
0 Likes

Quoting: edoI tough he wasn't porting games anymore, since he was focused on SDL2 and stuff.

I imagine some of that is in his time between ports :)
1 Likes, Who?

Quoting: TimeFreezeFor the love of god.... Oh well time to sell some organs i guess.

View PC info
I'm going to hold off buying the Steam version for a bit in hopes it comes to GOG. I'm a patient man.
1 Likes, Who?

View PC info
This doesn't seem to be working... I get an error when trying to launch that says "Invalid App configuration."
0 Likes

Afaik the game uses SDL_net for multiplayer, heck, ya can even find servers through Doomseeker.
0 Likes
1/3»
While you're here, please consider supporting GamingOnLinux on: