Turok 2: Seeds of Evil now has a beta available for Linux gamers

Game porter Ryan Gordon sure has been busy. Only recently we got Turok for Linux and now Turok 2: Seeds of Evil is in beta for Linux. 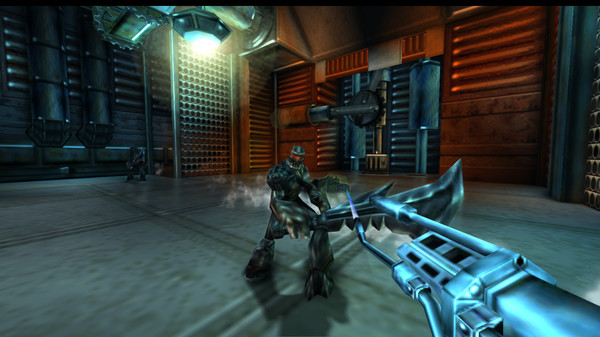 Turok 2: Seeds of Evil returns to the PC! The sequel to the hit game Turok is now available, featuring a host of enemies, weapons, missions, locations and a new multiplayer mode. Remastered for today’s computers using a new engine with improved graphics, Turok 2 will transport players into sprawling environments with vicious enemies lurking behind every corner.

Seems this one actually had quite a number of enhancements over the original release. These updates include 64bit support, a new UI system, a modern graphics system with a deferred renderer, shadow maps and compiled light maps, screen-space reflections on textures and materials and more graphical improvements.

It's not just the graphics which have been beefed up, the AI was also updated to make it smarter and more menacing. The control scheme for your character was also improved, giving you better speed and manoeuvrability, including letting you grapple ledges. Additionally, it includes a new "Last Turok Standing" multiplayer mode.

Since it's in beta, you will need to opt-in manually on Steam. There's no password, just right click it in your Steam library, go to properties, select the beta tab and then find it in the drop-down box.

You can grab a copy on Humble Store or Steam.

If you're a developer looking to get your game ported to Linux, why not try reaching out to Ryan.

Article taken from GamingOnLinux.com.
Tags: Action, FPS, Steam
15 Likes, Who?
We do often include affiliate links to earn us some pennies. We are currently affiliated with GOG, Humble Store and Paradox Interactive. See more here.
About the author - Liam Dawe

View PC info
Still waiting on the Linux version of the first game to show up on GOG, I never played these games more than the first couple levels so it would be great to finally take a proper look at them.
2 Likes, Who?

View PC info
Yeah, what happened to the Linux release on GOG for the first game?
5 Likes, Who?

Kristian 12 Jul, 2018
View PC info
Speaking of Ryan Gordon and GOG, maybe his next porting project could be GOG Galaxy. I mean if GOG can't find the resources for it internally they really should outsource it.
10 Likes, Who?

View PC info
I want this so bad. I'm still hoping they both make their way to GOG soon.
2 Likes, Who?

Quoting: KristianSpeaking of Ryan Gordon and GOG, maybe his next porting project could be GOG Galaxy. I mean if GOG can't find the resources for it internally they really should outsource it.

If this is released, i'll consider buying games on GOG for Linux.
1 Likes, Who?

Quoting: KristianSpeaking of Ryan Gordon and GOG, maybe his next porting project could be GOG Galaxy. I mean if GOG can't find the resources for it internally they really should outsource it.

What a great idea! This could be a chance, i wonder if this has crossed Icculus' mind. Gotta hint him.
0 Likes

View PC info
Looking at the game files, it would appear this uses (what I though was dead) TurokEx.
0 Likes

View PC info
I owned the first game on Steam, and was pleased to be offered a discount of 25% when purchasing Turok 2. Much to my wife's dismay I have been playing this solid for hours this evening :-)

With regards to the comments about GOG, I personally feel we shouldn't look a gift-penguin in the mouth and appreciate that these games are available via any distribution service. We are already buying copies of commercial games without the source code, so using Steam's DRM doesn't seem that much of an issue!
0 Likes
While you're here, please consider supporting GamingOnLinux on: