Two Worlds II to release on Linux in May, along with engine upgrade & Call of the Tenebrae DLC 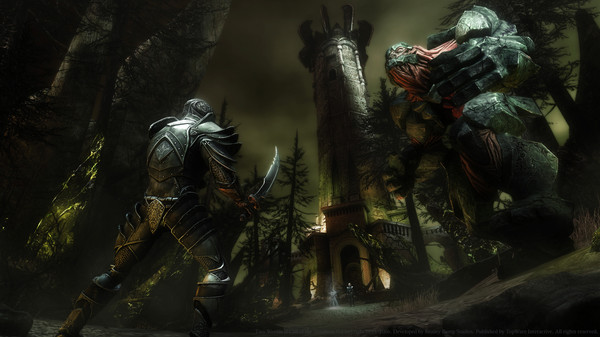 Topware Interactive are revamping Two Worlds II [Steam] and bringing out a new DLC named Two Worlds II: Call of the Tenebrae. Both will see Linux support on May 25th.

I got the full press email, which mentioned the Linux release. To be sure, I also got confirmation directly from their PR team:

I asked: So to confirm, Two Worlds II plus the DLC will release on Linux/SteamOS on May 25th as well?


Steven Ellsworth, Topware InteractiveYes, we will release on Linux as well as Steam OS. Later this year we will also release on PS3 and Xbox 360

They are also planning an additional DLC named Shattered Embrace in Q4 of this year, but no clearer date as been given.

I'm looking forward to it, since we do have a lack of good open-world RPG titles and the new DLC sounds pretty good. I've never played it myself, so I've request a press copy to cover it in full when it's available.

Hopefully it will turn out better than the bombshell that was their handling of Vendetta - Curse of Raven's Cry...

Full original press email to me copied below:

Spoiler, click me
The RPG Phenomenon is back, with Two Worlds II: Call of the Tenebrae!

Karlsruhe, April 21, 2017- The RPG Phenomenon, Two Worlds II, makes its triumphant return! The creative teams from TopWare Interactive and Reality Pump Studios are excited to present Two Worlds II: Call of the Tenebrae, launching May 25, 2017! So grab your staff, sharpen your blades, and ready your bow; at long last, it’s time to return to Antaloor!

Two Worlds II: Call of the Tenebrae plunges the Hero into a decades-old mystery and a battle against a hideous, ancient evil known as The Tenebrae. The stakes have never been higher, but our hero won’t face this threat alone. Friends and foes both new and old await you, as you fight to discover the truth behind a powerful secret that will shake the Two Worlds universe to its core.

“When we started development on Two Worlds II: Call of the Tenebrae in early 2016, we underestimated how excited our team would be to get back to Antaloor. It took longer than expected, but we ended up with a 10+ hour adventure that is nearly a full sized release! Due to how large Call of the Tenebrae became, we’ve decided to release our game as an add-on to Two Worlds II, in addition to a standalone version for fans both new and old.” - Alexandra Constandache, CEO TopWare Interactive


Play through 10+ hours of thrilling gameplay and experience Antaloor like never before with a major HD engine update! Packed with new locations, enemies, weapons and achievements, Two Worlds II: Call of the Tenebrae will be released for the PC, Mac, Linux and the Steam OS.

Also available is the season pass, which includes Call of the Tenebrae and the soon to be released follow up DLC, Shattered Embrace (Q4-2017), 2 upcoming multiplayer map packs, in addition to a host of deluxe digital content, including in-game bonus items, the art book, the Two Worlds II compendium, game soundtracks and more! Enjoy this new adventure as an add-on DLC for $9.99, or separately as a stand-alone title for $14.99.
Article taken from GamingOnLinux.com.
Tags: Action, DLC, RPG, Steam, Upcoming
15 Likes, Who?
We do often include affiliate links to earn us some pennies. We are currently affiliated with GOG, Humble Store and Paradox Interactive. See more here.
About the author - Liam Dawe

View PC info
Are there info about pricing for the Linux or the Enhanced version only for owners of the original game? We should buy it again buying the add-on?
0 Likes

Yeah that's a pleonasm. SteamOS is Linux lol
3 Likes, Who?

View PC info
Raven's Cry is buggy. True. But Vendetta Curse of Raven's Cry is much better now. Do you know why? So Reality Pump worked on the original, promising - Sacrilegium game. However, the publisher TopWare decided that the Octan Games studio (finland) was not working well with the production of Raven's Cry - ordered by TopWare. So TopWare moved the project to the part made to Reality Pump, which caused them to abandon their existing projects such as Sacrilegium and focus on Raven's Cry.
In spite of all, they had very little time to repair the game, the publisher was still on the move, and they had to finish "not their game" - note that it was not an easy task, especially when the majority of the crew left the newly created CD Projekt RED division. In spite of all, they had to release the game as it was because the contracts they had committed were almost bankrupt. Hence such quality. Vendetta, on the other hand, works pretty well.
1 Likes, Who?

View PC info
Will they release it on GOG as well? Two Worlds II is already sold there.

Yeah, it's quite annoying when they say such stuff. Sounds like on PC and on Linux.
1 Likes, Who?

What would really suck is if there were a way to force you to use SteamOS instead of whatever flavor of Linux you prefer.

Then again, I'm sure whatever possible thing they could to try to enforce that, someone would find a way around it. Fortunately Valve is smart enough to to bother trying.

On another note; There was the comment about needing more 'Good Open world RPGs', when I played Two Worlds (may have just been the first one) it was pretty terrible. Not sure if I even tried the second. But this is just an enhancement, right? How many damned editions do they need? I apparently have Two Worlds II in my library on Steam, but don't have the Epic Edition there; but on GoG, I have Two Worlds II: Epic Edition (Linux support), and Two Worlds II: Velvet Edition (Windows only).

Is this going to be the "Epically Velvety Velour Edition?
0 Likes

QuoteTwo Worlds II to be released on Linux in May

0 Likes
1/5»
While you're here, please consider supporting GamingOnLinux on: