The latest Steam Beta Client is out with Valve's revamped chat interface, along with some minor UI work as well.

Here's how the new interface and settings look, which is quite a lot cleaner and it does certainly look a lot more modern that's for sure. Steam's chat system was probably one of the oldest parts of Steam, so it's good to see a renewed focus on improving it. 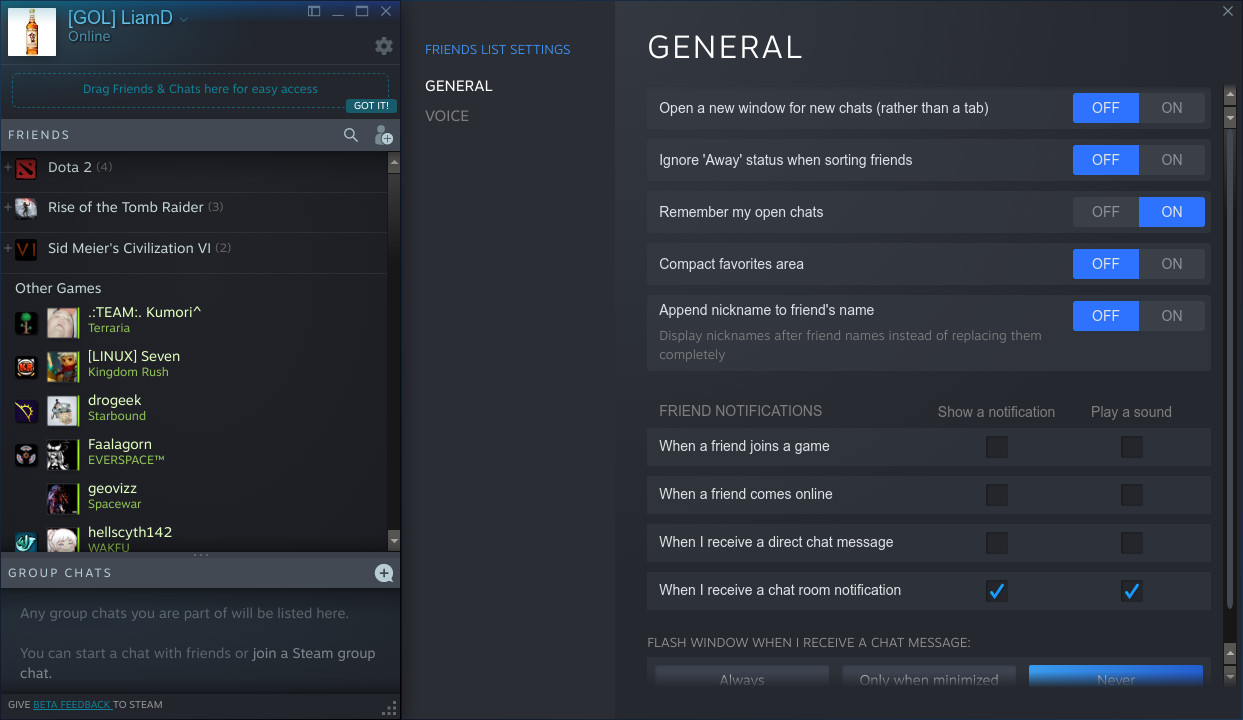 The new favourites section is interesting, giving you a section to plonk people in you regularly chat with.

And here's how glorious the actual chat is, so I can send you all hilarious memes: 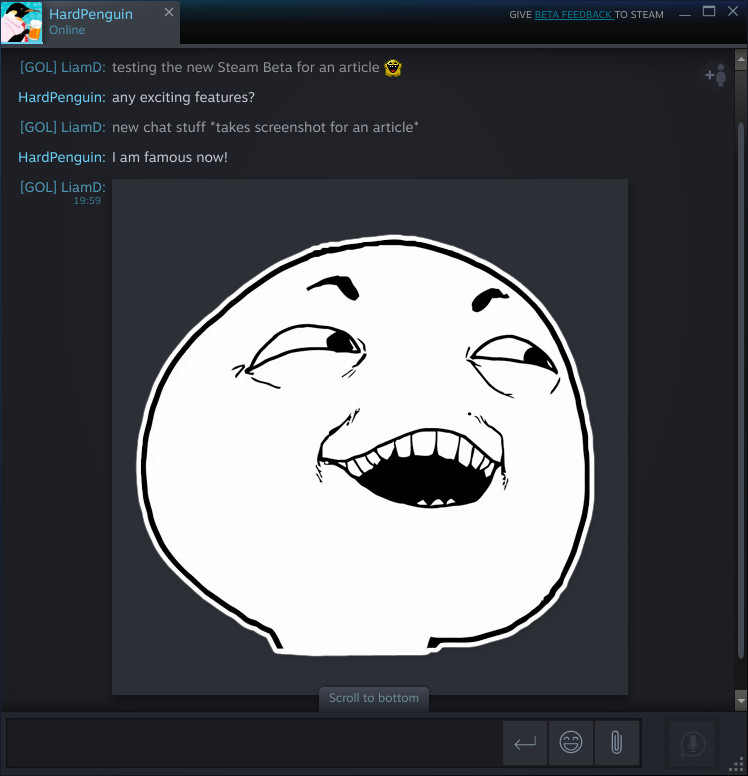 They updated the Group Chat feature as well, to be a lot more like Discord. You can add additional text and voice channels to them, including the rich image stuff like shown above. Group Chats can be given a name and avatar to save them as well, to pick it back up later.

Another benefit, is that it seems to finally keep some chat history too. I've closed and re-opened multiple chats, closed Steam itself and I still see what has been said.

There's additional handy features have been added too, like right clicking a game in your friends list and being able to go right to the store page: 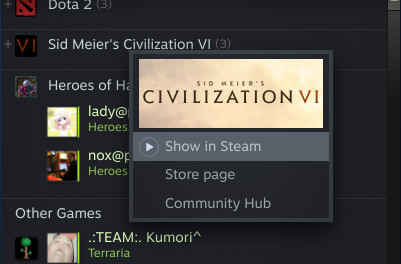 However, it looks like this update has broken group chat for Steam Groups (like our Steam Group), as Steam will complain it can't find Steam running (as amusing as that is). In the shot below you will see that bug in action, plus the slightly different UI in the top right and bottom right. 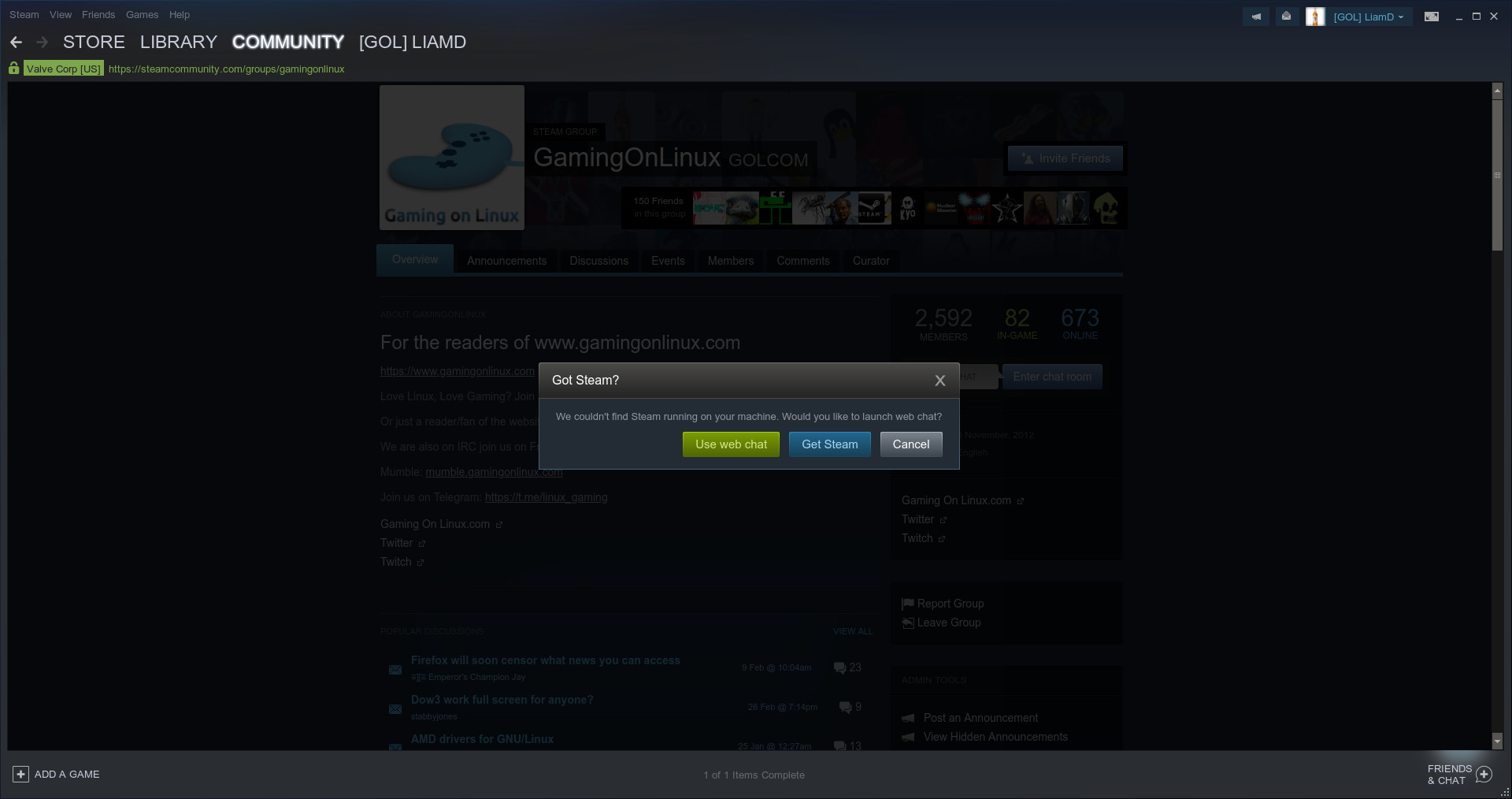 To get around that issue, you can join the Group Chat from the Steam website, which then saves it into your Group Chat section of your friends list. I'm sure they will solve that weird issue soon. So the actual Group Chat interface now looks like this (very Discord-like): 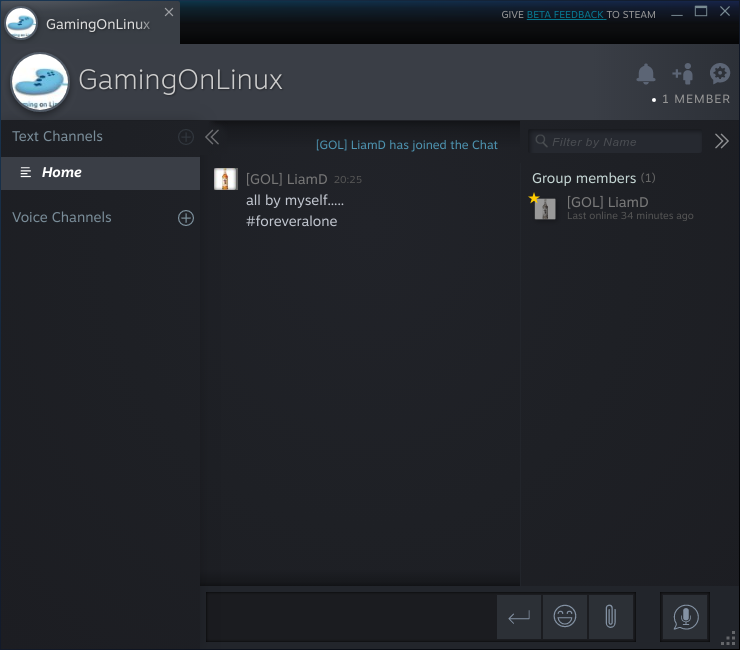 You can join our very own GamingOnLinux Group Chat using this link, if you're bothered about it…

Another nice thing about the update, is that chats are finally tabbed together. You don't have many windows just for chat, all nicely under one roof now. To me, that's much nicer.

They've also completely rewritten voice chat from within Steam as well, with a WebRTC-based backend. It uses Opus encoding, encryption and the voice chat now goes through Steam directly, instead of being peer 2 peer. This should hopefully fix the issues where you couldn't connect to your friends to voice chat. It also now only requires a single click to voice chat with someone, although, that feature only works if your friend is also in the Steam Client Beta.

In addition, a feature I'm very happy about, is the new invisible mode. This allows you to show as offline, but still actually act is if you're online. For someone with as many people on their list as me from various tournaments and so in, it's a lot less hassle.

All of this works in the webstore too, not just the client. There's more I've likely missed, so do see the full details on their special update page here.

elmapul 12 Jun, 2018
View PC info
do they have an history of conversations now?
0 Likes

View PC info
Ah, sweet. I see they've made gentle changes in multiple spots. I like where this is going :D
0 Likes

Quoting: elmapuldo they have an history of conversations now?

Just opened a chat I closed, kept history. Closed steam, re-opened, chat still there. So it seems so!
0 Likes

View PC info
ohh gee i wanted to be famous too
1 Likes, Who?

View PC info
I'm subscribed to the beta, but no update available
0 Likes

Quoting: toorI'm subscribed to the beta, but no update available

It didn't tell me that I had an update available. I had to just restart steam, which got it to update without telling be that there was an update :)
0 Likes

Quoting: toorI'm subscribed to the beta, but no update available

It didn't tell me that I had an update available. I had to just restart steam, which got it to update without telling be that there was an update :)

I've done that. And then unsubscribed from the beta and subscribed again. That didn't solve it.
0 Likes

0 Likes
1/4»
While you're here, please consider supporting GamingOnLinux on: