Not everything Valve does hits the right spot and it seems the final few nails of Artifact's coffin are being hammered in.

Back in January, I wrote a small bit about Artifact and how it was bleeding players constantly. I said it would probably "die off completely within another three to six months" and it looks like I could be right there. Even back in January, it still had over two thousand regular players and less than two months later it's sunk down to around six hundred. 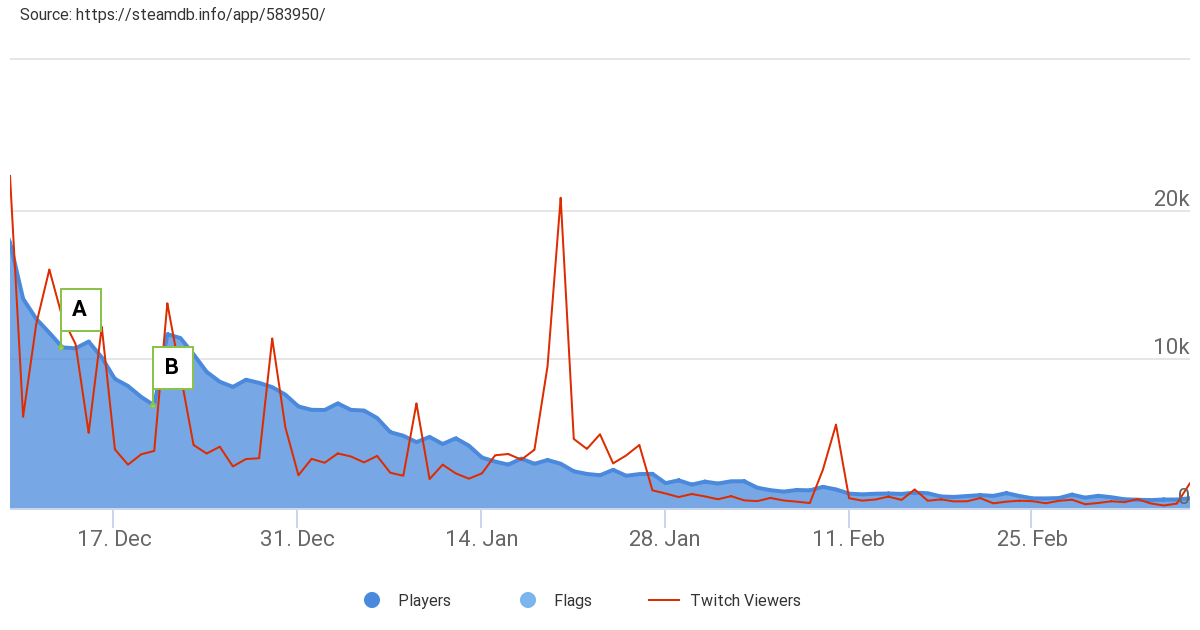 Recently, it's been reported and confirmed that the legendary designer Richard Garfield, who also created Magic: The Gathering, has left Valve and so any chance of bringing Artifact back to life is firmly in the hands of Valve. With no official update on Steam in well over a month and continued silence from the official Twitter account since December, it's really not looking good.

A massive shame, as the actual gameplay in Artifact is really good but for many reasons players just didn't stick with it. To me, the main reasons were the lack of any meaningful progression at launch and the monetization model which really wasn't great for a paid game. Both of those soured the experience for many, myself included.

It's now sat with a Mostly Negative rating from recent user reviews, which isn't exactly surprising.

There's a number of steps Valve could take to revive it but as always we have no idea what they're up to, as Valve don't particularly like to tell anyone about their plans. I actually hope they do manage to turn it around, so I will keep an eye on what happens.

View PC info
Valve should do some fan service and bring old franchises back to life.

I guess, this would make people honor games like Artifact more,
as it doesn't feel like Valve is ONLY after cash cows.

Eike 11 Mar, 2019
View PC info
I'm get a comment number one too high: "2 comments" in front of the subscribe button, while there's only sub's comment. (My block list, to my own surprise, is empty.)
0 Likes

Probably we both are blocked by <OTHER PERSON>. ;)
0 Likes

Quoting: subProbably we both are blocked by <OTHER PERSON>. ;)

But then, <OTHER PERSON> must have blocked <ANONYMOUS PERSON>, too. ;)

I get the same result after logout.
2 Likes, Who?

Probably we both are blocked by <OTHER PERSON>. ;)

No, it's a bug. Open in incognito and check.

On topic: I guess there's not many ways left for Valve to fix this. If they want the game to live they have to go F2P and monetize it as usual *tips fedora*. Or it will really die in a couple of months. I personally stopped playing because of the game pace. The timer is too quick and I need to make too many decisions getting all nervous and missing opportunities. I'm fine with RNG, lack of progression, paid cards etc. but I can't play it at this speed. And there's no relaxed play option. Also no casual draft mode which is plain stupid, you can only draft against randoms and not your friends.
2 Likes, Who?

View PC info
It's not the first time Valve has made a game that bombed. But that's ok. It was different, they were trying something that was new for them. It didn't work but oh well. The important thing is that they just brush it off and move onto the next idea to try.
0 Likes

View PC info
If any Valve employees read this, here's my suggestion:

Please buy iRacing and make it as your own IP Valve.
or
Make your own F2P racing sim with offline capabilities

Why? I'm not totally making any speculation here. But my heart tells me probably F1 2019 may coming to EGS exclusively. Let's be honest, EGS doesn't have so-called proper racing games. So, if Valve secured iRacing (not forget, port it to Linux), the future of Steam (read : money) maybe secured and Valve can continue to be lazy some more after that. :D
3 Likes, Who?

You mean, just abandon about 1.5m customers? Not a good move from the business point of view. The brand loyalty is finite. Blizzard were known as a company that only makes great games, instant classics and so were Bioware. I hope Valve don't want to join them.
0 Likes

You mean, just abandon about 1.5m customers? Not a good move from the business point of view. The brand loyalty is finite. Blizzard were known as a company that only makes great games, instant classics and so were Bioware. I hope Valve don't want to join them.

Well, apparently the 1.5 million customers abandoned the game that they could have still been playing.

As for the problem? I don't see the monetisation model as the big issue since the market has proven that there are always enough people to keep spending money on things. Besides there is plenty of gameplay to be had without spending a dime. Which means the problem must also be with the game.

I personally see two problems. One is with myself. This game requires quite a bit of effort to be decent at. And I seem to have to little time with enough focus to do it. The bigger problem I have is with the deck stacking RNG that leaves games dead in the water before you even start. Then again, if I see the winning streak numbers in the Call to Arms games, then this is probably also at least partially attributed to the first problem. If people win 15 games in a row, then they must have some ways to deal with unfavourable stacking. Maybe it is simply a case of too few people having the time or willingness to get good at it.
0 Likes

View PC info
I don't know, I never was a fan of card games, it just isn't my thing, or maybe just for a couple rounds (though tarot is OK to me, to be fair). I sigh every time i'm offered to play gwent in the witcher.

From a business perspective, it might make sense for them to concentrate on F2P (or just plain free) games to bring players to the platform, and take a cut from other sellers. That might actually be just what they are doing with counter strike, dota, tf, alien swarm...