It will be very interesting to see what Valve have up their sleeve for this one, as their card game Artifact seems to be dying.

How does the saying go? You only get one chance to make a first impression. Well, Valve made a number of missteps with the release and so not many will come back to it. When you consider the fact that in 2018 over nine thousand games released on Steam there's a ridiculous amount of competition for everyone and Valve aren't above that.

First, take a look at this (thanks SteamDB): 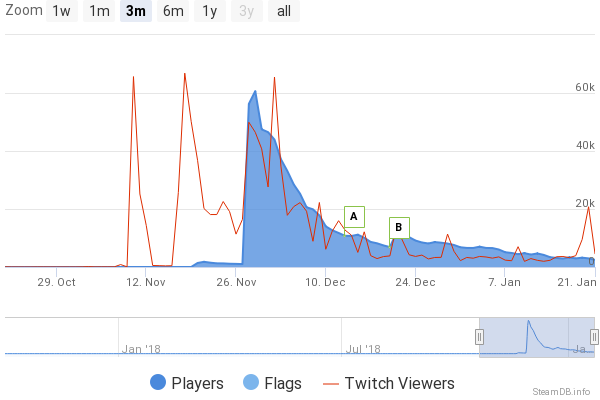 Artifact went from a high point of over sixty thousand players to around only two thousand in the space of about two months. It's bleeding players, quickly, and that's quite alarming. When you adjust the chart on SteamDB to look at it over a single month of "Players every day" it's showing a sad downwards trend. Unless they do something drastic, the player-base is likely to die off completely within another three to six months.

So where did it go wrong? In my opinion, Valve's decision to initially release it with zero progression and no way to earn anything without some form of extra payment was a poor one. In my original review, I did note that it could be a "deal-breaker for some" and that likely attributed to people not coming back. Valve did add some progression and unlocking systems with the "Build Your Legend Update" but the damage was already done. By the time the update was released Artifact had already lost around fifty thousand from their players per day.

It certainly hasn't helped that the Artifact team has gone a lot quieter. Take their Twitter for example, during December they put out around thirteen tweets to keep the community going. How about January? None. It doesn't exactly inspire confidence. I think Valve could honestly learn a lot from other developers at this point, a lot of games are successful not just because the game is good, but because they're constantly messing with the community and Valve has a history of being too quiet until they do something.

The biggest problem for Artifact now is the players that remain will be dedicated players that have likely honed their skills rather nicely. Anyone jumping in now and playing online is probably going to get their arse thoroughly handed to them and likely not come back often if at all.

Truthfully, as excited as I was for it, my own feelings on it have fizzled out as well. I can't quite put my finger on why exactly, since I do like the basic gameplay of it. It certainly doesn't help that people I was going to play with have also parted ways with it. A community just didn't build around it and so if Valve wish to keep it alive, their only real option left is likely just to make it free to play. It will be interesting to see what they do.

None of that is addressing the elephant in the room, which is that Valve vastly overestimated their pull with gamers. I've said it before and I will say it again, Valve are sitting on some IP that would seriously turn heads. If they put out a Left 4 Dead 3, Portal 3 or Half-Life 3 (or all of them) this would be a very different story. Not because I'm some sort of mad fanboy or something, they're just what most of their actual fans seem to be waiting for.

View PC info
It'll be FTP by the end of the quarter
4 Likes, Who?

View PC info
Personnaly I bought the game but I'm waiting to see if the game will receive any extensions of cards if at all.

I wonder if the devs are surprised. They made a game with micro-transactions with an upfront 20$ cost (or whatever the price is now) and an abysmal progression system. They were bleeding massive amounts of players within days of release. Maybe emulating the ActiBlizz business model for their COD games was not the best idea.

And like TimeFreeze already mentioned: there are Valve games that people would absolutely love to see. This was not one of them.
1 Likes, Who?

View PC info
Does not surprise me at all. No one was waiting for another card game, especially not by Valve. Of course, there was high demand in the early days, because it was a Valve game. But then the truth kicked in: it's just a card game.
2 Likes, Who?

View PC info
Well that's what you get if you sell the game and add gambling into it. Though usually people will still buy all of this crap cause "its Valve and Valve is the best you know". Seems thisone didn't even work well for Valve fans :)

Free to play is the only option for this to be saved i guess. I have few friends who say that they would like to try it if it was free, but not willing to pay and then pay for extra stuff.
2 Likes, Who?

Quoting: XpanderFree to play is the only option for this to be saved i guess. I have few friends who say that they would like to try it if it was free, but not willing to pay and then pay for extra stuff.

Even as a free to play it's not gonna stick around for long if continues to have such a low card count.

Faeria almost died out of not putting out card expansions quick enough. The harsh truth is that with CCG you need to be able to shit out a new card set at least every semester to stay relevant. And every semester that's if every set is real chunky.

To make matters worse WotC have finally made a digital version of Magic that actually works and actually is fun to play this time around. So artifact is competing against not hearthstone but against the progenitor of modern day CCG's itself ...
2 Likes, Who?

View PC info
Well, thanks the universe, there is still some niche greatness, like Argentum Age : http://www.argentumage.com/
6 Likes, Who?

View PC info
If it becomes F2P I'll definitely try. Valve is very wealthy, they can make all their games F2P with cosmetics and they will still make a lot of money.
0 Likes

View PC info
This was a triumph!
I'm making a note here: HUGE SUCCESS!
It's hard to overstate my satisfaction.
4 Likes, Who?
theghost 23 Jan, 2019

View PC info
The lack of communication simply sucks but it's a problem for all Valve games.
Because of Valve Time they can't promise anything to the community to not make them angry, so they better say nothing at all, which makes the community even more angry. It's sad, maybe they deseserve the hard competition.

I mean how hard can it be. Look at Threse Brothers, they are literally a two man indie studio and can write nice progress announcements atleast on weekly base: https://steamcommunity.com/games/335620/announcements/

I really hope they can improve the situation because it looks not so bad and I almost bought it.