Valve have sent word today that their digital card game Artifact [Steam Link] is officially releasing on November 28th and it will be playable at PAX West between August 31st and September 3rd. 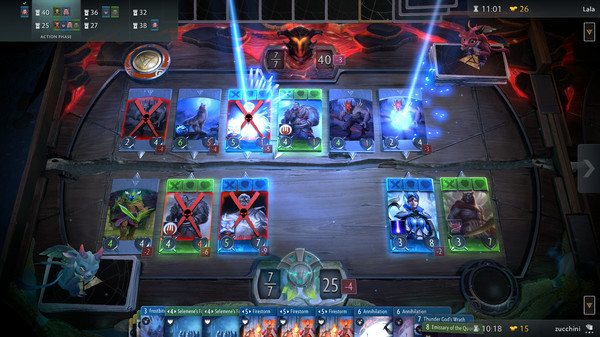 Artifact is designed to give Trading Card Game (TCG) enthusiasts the deepest gameplay and highest fidelity experience ever in a fantasy card game. Offering more than 280 cards in the shipping set, players will be able to buy and sell cards on the Steam Community Marketplace.

The event at PAX will be the first public showing of the game, so no doubt there will be plenty of videos and thoughts up from those who are able to attend (we're not, sadly too expensive for us). Here's what Valve said about the PAX event:

Players will battle each other in a continuous, single-elimination gauntlet for the right to challenge a champion on the main stage. Everyone who plays will earn Artifact merchandise, including signed prints of artwork and two keys for free copies of the game when it is released.

As a long time fan of such card games, it's pleasing to see Valve continue to push Linux support. We already knew this of course, as they already confirmed that fact previously. It will be interesting to see what people think about the ability to buy and sell cards once it's live, since that's very much like a real-life experience for any competitive/collectable card game.

Article taken from GamingOnLinux.com.
Tags: Card Game, Steam, Strategy, Upcoming, Valve
20 Likes, Who?
We do often include affiliate links to earn us some pennies. We are currently affiliated with GOG, Humble Store and Paradox Interactive. See more here.
About the author - Liam Dawe

I am the owner of GamingOnLinux. After discovering Linux back in the days of Mandrake in 2003, I constantly came back to check on the progress of Linux until Ubuntu appeared on the scene and it helped me to really love it. You can reach me easily by [emailing GamingOnLinux directly](mailto:contact@gamingonlinux.com).
See more from me
Some you may have missed, popular articles from the last month:
The comments on this article are closed.
23 comments
Page: 1/3»

Well, i'm curious to see that. So many games are over simplified these days...

In the meantime, you can play the excellent, free and open source, Argentum Age : http://www.argentumage.com/

View PC info
Not a fan of card games such as HearthStone, but seeing that it's Valve and Valve supports Linux; AND, assuming it will have day 1 Linux support. I will probably give this one a shot.
2 Likes, Who?

View PC info
Interesting, I still haven´t tried "Slay the Spire", which I believe is also some kind of highly acclaimed card game. If I enjoy that title then I might just be hungry for more come late november.
0 Likes
neowiz73 1 Aug, 2018

View PC info
I've been hoping to see a good and fun alternative to Hearthstone. I wished MTG Arena was available for Linux but alas, I hope Artifact will be a decent TCG without requiring a lot of funds to have fun casually. Can't wait to give it a shot.
1 Likes, Who?
Jollt 1 Aug, 2018

View PC info
A card game using steam's market does sound like fun. I know nothing of DOTA though. I'll probably give it a try.
2 Likes, Who?

View PC info
It's attached to the community market, and there's almost certainly going to be microtransactions, so that's enough to get a no from me. The fact that it has an entry fee is almost an insult considering it's GaaS.

I was originally interested in this, as a Dota 2 player who can occasionally enjoy a card game. For it to be based on Dota and not be free-to-play is a deal breaker though. I'd rather spend money on Dota 2 itself (which is nervously approaching the possibility of not having as big a prize pool for the The International tournament this year versus last year - game might be on the decline).
2 Likes, Who?
1/3»