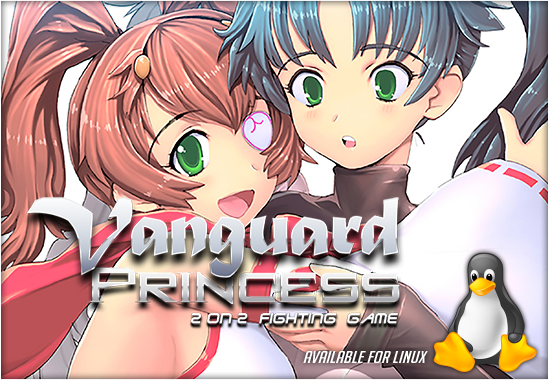 Fighting games are in short supply on Linux, so Vanguard Princess has come along to help fill the void for us. A few moments ago they announced the Linux version is good to go!

They note that buying it on Linux grants you this:

It's a little confusing, as it makes it seem like it's somehow different to buying the Windows version, but it uses SteamPlay, so it should all be the same.

From looking over it, what I think they mean is that all the DLC is included in the Linux build right away. From the feature list, it sounds like that's the case and the DLC do only have Windows icons. So it's probable I'm right on that.

Earlier reports were that the game uses Wine on Linux, as I don't own it I cannot verify it.

About the game
Government experiments on a young girl triggered a cosmic shock wave that gifted many young girls with mystical powers. She re-emerges into the world and vows to destroy all of mankind in an act of revenge. A brave group of girls who embraced their powers head to the battlefield to confront her; not just for the sake of the world, but to pursue their own personal motives and dreams.

Find Vanguard Princess on Steam. It's also now on sale until the 5th of September it's dirt cheap! Article taken from GamingOnLinux.com.
Tags: Action, Steam, SteamOS
0 Likes
We do often include affiliate links to earn us some pennies. We are currently affiliated with GOG, Humble Store and Paradox Interactive. See more here.
About the author - Liam Dawe

View PC info
I confirm that the game uses wine. There are also a bunch of perl and python scripts in the game directory, aswell as a pre-generated wineprefix. It also seems to use the CrossOver version of wine - I found a 'crossover' folder in the users directory of the wineprefix. The directory structure is very very interesting.

Slight edit: When starting the game for the first time it creates a CrossOver bottle.

View PC info
It seems that you do get the DLC playable characters with the base game purchase. The soundtrack does not seem to be included though.
0 Likes

View PC info
Good to have some more fighting games. But i pass on this one, cause I don't like the idea of using wine. I rather stick to Skullgirls at the moment and keep on waiting for the Street Fighter V port.
2 Likes, Who?

View PC info
This is not a good game, i played it on Windows and hated it, it has no options and the resolution is ridiculous.
0 Likes

This is a 2D fighter that's not going to be taxing any systems, and it's an older game so we likely were never going to get it on Linux at all without a wrapper. This is just not a situation in which we can reasonably bitch about not getting a native port.

But hey! It's a 2D fighter with a well-done anime art style! Those are not common on Linux! Even if it's not your cup of tea, it strengthens the variety of games on our platform! Can we just be happy about the gift instead of moaning about how the wrapping paper isn't perfect?
9 Likes, Who?

boltronics 30 Aug, 2016
View PC info
If it's running under CrossOver, then I expect they paid CodeWeavers for the port. CodeWeavers are the biggest Wine contributors, so are a company we should support. Compare that to eON wrappers and indirectx wrappers, which don't contribute anything back to free software.
10 Likes, Who?

Quoting: mrdeathjrMaybe buy but 50% is low however if you buy bundle discount up to 63%

There's no need to buy the Bundle as all DLC is already included in Linux version...
1 Likes, Who?

Quoting: mrdeathjrMaybe buy but 50% is low however if you buy bundle discount up to 63%

There's no need to buy the Bundle as all DLC is already included in Linux version...

All the playable characters at least. Don't think that the soundtrack and the artwork are included. Or maybe I don't know where to look for them? :S:
0 Likes
1/2»
While you're here, please consider supporting GamingOnLinux on: