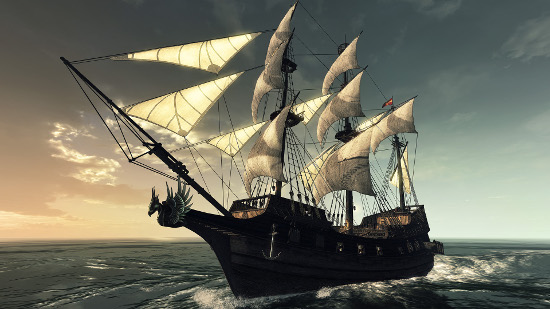 Vendetta: Curse of Raven’s Cry looks like it will be quite the upgrade over the poorly received Raven's Cry. I spoke with my TopWare contact who confirmed it will be free for Raven's Cry owners, with a little manual process.

When asking if it will be free, Dirk P. Hassinger from TopWare said this:


Dirk P. HassingerEveryone who purchased Raven’s Cry on Steam can request a free Upgrade to Vendetta.

Asking him to calrify how they get it:


Dirk P. HassingerYes. We will make a web form for it. Procedure will be easy.


Looks like it will be a rather big update, and Dirk himself said it's been worked on for 9 months, and features double the content. So, maybe this time it will be better received?


Press ReleaseHere at Reality Pump Studios, we are excited to announce the completion and upcoming release of our dark, bloody pirate epic, Vendetta: Curse of Raven’s Cry.

After an almost seven year-long cursed development, we are finally ready to unleash Vendetta: Curse of Raven’s Cry as it was meant to be seen and played. Development for Vendetta began way back in 2008, and has seen every game pitfall imaginable. Even Christopher himself, actor Mark Strohman had an infection that traveled into his brain, almost landing in Davy Jones’ Locker himself during MoCap shootings. It’s been a long and wired journey, but after all the time and all the setbacks, we are proud to say that the game is close to be finished and we launch the new website today!

There's life in the old dog yet - stay tuned! Vendetta: Curse of Raven’s Cry will be available for Windows, Linux, Steam OS and Mac OSX. 50+ hours of game play, over 360 characters, more than 500 quests, 120 minutes of cinematics, authentic weapons, locations and ships, a free-flowing melee combat system and intense naval battle action await you in this sprawling role playing adventure. Every choice or deal has a price, and yours will dictate your journey, and your fate.

We do often include affiliate links to earn us some pennies. We are currently affiliated with GOG and Humble Store. See more here.
About the author - Liam Dawe
I am the owner of GamingOnLinux. After discovering Linux back in the days of Mandrake in 2003, I constantly came back to check on the progress of Linux until Ubuntu appeared on the scene and it helped me to really love it. You can reach me easily by emailing GamingOnLinux directly.
See more from me
Some you may have missed, popular articles from the last month:
The comments on this article are closed.
17 comments
Page: 1/2»
Ser Eduardo Mogambro 19 Oct, 2015
Sounds rather interesting. The "original game" was on my wishlist, but I waited and the bad reviews did the rest, so this may be what I was looking for initially. Hopefully that's the case for a lot of people, including the devs.

Liam Dawe 19 Oct, 2015
View PC info
Samsai linked me this video in the IRC to show just how bad it was: https://www.youtube.com/watch?v=lofR-R_rFJ0

I really hope they have fixed it up, and not just added in new content.
3 Likes, Who?
Ser Eduardo Mogambro 19 Oct, 2015
It's actually quite funny, but not 50 bucks funny :D
0 Likes

19 Oct, 2015
Wasn't there a rumor that the whole thing is a scam? I think this announcement proves that theory.
0 Likes

View PC info
I look forward to seeing this when it finally comes out. This is what they were talking about on the steam forums that was originally being called a big patch but then they said it would essentially be a separate game. I actually kinda enjoyed the bit of time I had with Raven's Cry. The game has potential and I especially liked playing a pirate who was like a real pirate (an ***hole) rather than the bogus romanticized pirates we usually get in games (rough around the edges but with a heart of gold). Of course, the game was so broken upon release that it was basically unplayable. Actually, broken isn't the right word, it was straight up unfinished.

So, yeah, hopefully this actually happens and hopefully it's a lot closer to a finished game ready for release this time.
1 Likes, Who?

View PC info
I really would like this game to not suck, but it looks like it needs an extra year or two of development before it would hit the shelves. And not for this price.
0 Likes

Quoting: liamdaweSamsai linked me this video in the IRC to show just how bad it was: https://www.youtube.com/watch?v=lofR-R_rFJ0

I really hope they have fixed it up, and not just added in new content.

I laughed my ass off :D
0 Likes

I have purchased the deluxe version of this game when it got announced on Steam.
I love pirate games and my favourite anime is One Piece
Well not many Linux games with Pirate theme and such graphics... so... why not... :P

Had some problems running the game in dual monitor, game crashing xorg server and other severe problems etc but now is more or less playable. Never played it though due to bad reviews....

Well getting the upgrade version for free put a smile on my face and I hope is gonna get a rating from 1% to 99% and it would justify its price... oh well ... lets hope that this release will exceed our expectations...
1 Likes, Who?

View PC info
@LIAM, could you ask your contact in TopWare / Reality Pump about supporting AMD GPU? Last Raven's Cry work only in Nvidia and on AMD even not run, only back screen and they still not fixing it yet. So anyone have info about if this is fixed in new version?
1 Likes, Who?
1/2»
While you're here, please consider supporting GamingOnLinux on: