Do not adjust your monitors, you read that correctly. Warhammer 40,000: Dawn of War II, Chaos Rising and Retribution are officially coming to Linux and will be released on September 29th [Feral Mini-site].

The port is being done by Feral Interactive, so it will have their usual great spit and polish on it.

Note: Multiplayer is Linux+Mac, it will not be cross-platform with Windows.

All three are standalone games and don't depend on each other, so you can buy one or all. Pretty great to see all three get released at the same time!

Retribution takes place ten years after Chaos Rising and presents a new threat to the Imperium of Man in which players may command any one of six races in a campaign that ranges across all the planets of sub-sector Aurelia.

In addition to their imaginative single-player campaigns, all three games feature highly-accomplished multiplayer in which players can either plunge into skirmish mode or team up with others in The Last Stand, a cooperative survival mode. 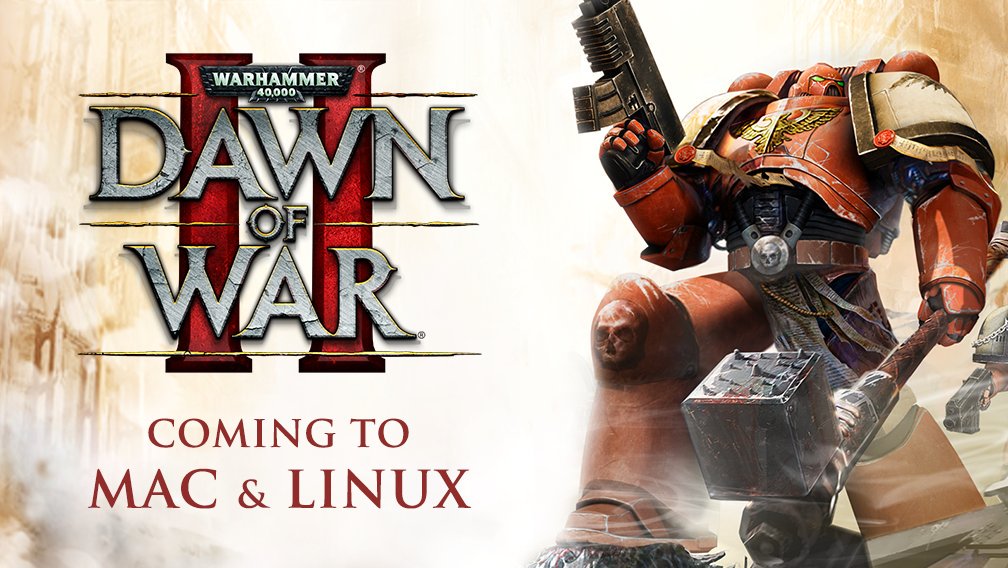 Quote“We're delighted to be bringing such enduringly popular games to Mac and Linux,” said David Stephen, Managing Director of Feral Interactive, “Their quality and appeal have more than stood the test of time and it’s a privilege to introduce them to a new audience.”

With a focus on fast-action RTS gameplay, Dawn of War II brings to life the science fiction universe of Warhammer 40,000 like never before. Experience the intimate brutality of battle as you play through your chosen race’s epic campaign. Clash with the enemies on battlefield ablaze with visceral melee and ranged combat. Lead and develop your squads from raw recruits into the most battle hardened veterans in the galaxy. Also included is The Last Stand, a co-operative game mode featuring user controlled heroes fighting waves of enemies.

So not only are Feral bringing us the brand new Deus Ex: Mankind Divided this year, but this month we get DoWII and the standlone expansions. Feral are good to us!

We do often include affiliate links to earn us some pennies. We are currently affiliated with GOG and Humble Store. See more here.
About the author - Liam Dawe
I am the owner of GamingOnLinux. After discovering Linux back in the days of Mandrake in 2003, I constantly came back to check on the progress of Linux until Ubuntu appeared on the scene and it helped me to really love it. You can reach me easily by emailing GamingOnLinux directly.
See more from me
Some you may have missed, popular articles from the last month:
The comments on this article are closed.
69 comments
Page: 1/7»

View PC info
well i bought game very long ago so What should i do to make it count as a linux copy sold.
And dont forget to mention that: YAYYYYYY!
1 Likes, Who?

lvlark 23 Sep, 2016
View PC info
The agony! I can't keep up with Feral's release schedule due to, you know, them doing such a good job and me having a job.
6 Likes, Who?

Quoting: Kuduzkehpanwell i bought game very long ago so What should i do to make it count as a linux copy sold.
And dont forget to mention that: YAYYYYYY!

You can't make your original purchase into a Linux one. That was a Windows purchase and always will be.
12 Likes, Who?


Quoting: Kuduzkehpanwell i bought game very long ago so What should i do to make it count as a linux copy sold.
And dont forget to mention that: YAYYYYYY!

What I see other people doing is gifting a copy from Steam directly to a Linux friend ;)
6 Likes, Who?

View PC info
I have only the base game, so still can show support by purchasing Chaos Rising and Retribution!
3 Likes, Who?

Adinimys 23 Sep, 2016
View PC info
Oh yes, oh yes a fucking yesyesyes !
This is one of my favorite rts game and one of the few game I bought before switching to Linux. So saddly I won't count as a Linux sale but this means that I'll be really close to 100% Linux in my game library ^^
1 Likes, Who?

If they wanted to truly release Warhammer games for a new audience, they should have ported Space Marine! That's a game that does not work under Wine, probably only because of copy protection.
0 Likes

Quoting: boltronicsWhy??!?!? These games all work perfectly under Wine. Have for a very long time.

If they wanted to truly release Warhammer games for a new audience, they should have ported Space Marine! That's a game that does not work under Wine, probably only because of copy protection.

Wine gaming is not Linux gaming and does not support Linux in any shape or form. Some of us don't buy Windows games and I am sure plenty of us never even looked at this game before.

It's all about building up our library without having to resort to hacks like Wine, which never truly work properly.
19 Likes, Who?
1/7»
While you're here, please consider supporting GamingOnLinux on: