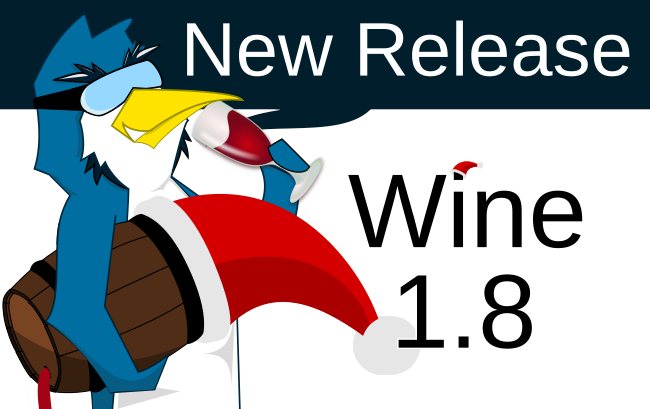 Today a new stable Wine 1.8 version was released. After a 17 months of hard work and nearly 13,000 individual commits it's here. And it brings lots of new shiny features in its sack(because it's December, so pick your holiday of choice).
Among these features are:


Over the years Pulse Audio became virtually the default sound output on Linux desktops, so the fact that Wine didn't supported it natively for so many years was troublesome at best. But it ends today, after so much bickering and arguing support for it and a working driver landed in this stable version.

Due to the fact that core context isn't supported and DX10, DX11 are supported on legacy contexts/compatibility profile, they are not supported on Mesa.

Setting PULSE_LATENCY_MSEC environment variable is no longer need with working Pulse Audio driver, so it can be removed.

To learn more about this release pleas visit this announcement.

Binary packages should be available for a download as soon as the build process is finished.

We do often include affiliate links to earn us some pennies. We are currently affiliated with GOG and Humble Store. See more here.
About the author - sobkas

*Translation:
If you do not get the reference, it is your fault not mine.
See more from me
Some you may have missed, popular articles from the last month:
The comments on this article are closed.
7 comments

View PC info
"Direct3D 11 is supported, to about the same level as Direct3D 10"

So basically almost not at all.
6 Likes, Who?

View PC info
I was initially a wine hater.
Now that Mortal Kombat Komplete works I kind of like it. :D

View PC info
I just want EdotMW and AOM:Extended to work :( but they don't
0 Likes

Liam Dawe 20 Dec, 2015
View PC info
After struggling with PlayOnLinux, I have ditched it in favour of Crossover now, the UI is much nicer in Crossover so far so good. I only use Wine for Starcraft II as I've loved Starcraft since as long as I can remember, and I stopped my stance of hating Wine a little while ago as it's just too useful for previously owned games.

Might have to sub to Crossover as it's really quite nice.
0 Likes

View PC info
This wine version comes with many improvements like as:

-vertex blending (No One lives Forever 2, Tron 2.0, Shade Wrath of Angels and others) thanks to jozef kucia

-various titles with GFWL work too

-and many other things


This is some examples


Some titles take benefits of CSMT code like Blur


However some titles like Aliens Colonial Marines this not have all benefits of CSMT code in wine 1.8


Last edited by mrdeathjr on 21 December 2015 at 5:09 pm UTC
0 Likes
While you're here, please consider supporting GamingOnLinux on: