The developers of Worlds of Magic emailed me to ask if we could do a shout out for their game. The game itself is meant as a spiritual successor to Master of Magic. 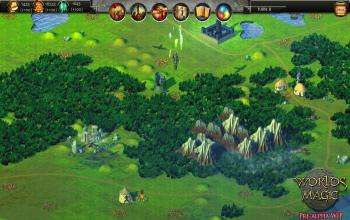 A little late on this one due to all the other news flowing in (6 days ago they emailed me, sorry!).

Master of Magic is a true gem among strategy games, it offered almost unlimited possibilities for enjoyable play. It gave players the freedom to create fantastic worlds and release the power of magic. Worlds of Magic will follow the same exciting path and share the spirit of that genuine classic. Although the game has been under development for almost a year, the team has recently decided to focus exclusively on it, creating a Kickstarter project which has been launched on April 2nd, seeking funds to complete this exciting title. Worlds of Magic will be available, according to our estimations, in January 2014. Although not until July for Linux.

I asked the PR guy a few questions of interest as well:

Is Linux something you are 100% commited to no matter what?

QuoteYes, once we reach the basic goal funding (30k pounds), Linux version is mandatory, no matter what. Stretch goals will only imply the possibility to hire more people and bring it earlier.

What engine are you using to make the game? Also why is the Linux release later than the Windows release?

Linux release is later because we are a very small team (build by two very small independent teams) and we don't have the possibility. We need the funding to first complete the game, and once released the team could focus on all the other versions.

I also got a second answer to the delayed Linux release directly from Aaron Ethridge, lead developer (Lucid Dreamers)

We want to give ourselves adequate time for play testing. Although Unity should be able to port it without problems we wanted to give ourselves room to work in case we ran into something. Better to say it's going to come out later and then release it on the same day as the windows version then say it's coming out the same day and then it be months late because we ran into some problem.

View PC info
Thanks for posting this, since there is still time to pledge. Somehow I managed to completely overlook the section on supported platforms the previous time I looked at the project, and was assuming WoM would be windows-only!
0 Likes

Once again, a big thanks to the guys over at Unity! Too bad with all these kickstarters, we aren't seeing anyone use a Unigine + Linux combo.
0 Likes
While you're here, please consider supporting GamingOnLinux on: