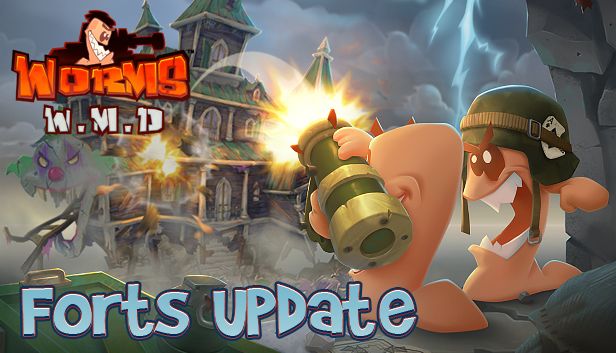 Worms W.M.D [Steam, Official Site] has just received a fresh update to add in a free game mode about battling with Forts, an apparent fan-favourite mode from earlier games.

You pick an animated fort, a special tactical item of your choice like a Sentry Gun or a Health Crate and then it's all-out war. Forts also get a flag composed of your Steam profile picture, I can see that being abused...

Strangely, the game has two options when you hit play in Steam, Play and Play (run.sh), with only the latter actually letting the game work for me. I gave the new Forts mode a quick test and it seems to work perfectly on Linux. Some real memories coming back to me here of playing the original on the Amiga and I'm still no better. Worm Samsai fired a bazooka which got blown back and sent Worm Liam into the ocean — doh!

Also, for those that didn't see, back in January they enabled cross-platform multiplayer, so you can play with anyone on Linux, Mac and Windows now.

I can recommend it, since it seems to work well (apart from the Steam Overlay seemingly not working) and it is a damn fun game. Simple pleasures with this one!

I am the owner of GamingOnLinux. After discovering Linux back in the days of Mandrake in 2003, I constantly came back to check on the progress of Linux until Ubuntu appeared on the scene and it helped me to really love it. You can reach me easily by emailing GamingOnLinux directly.
See more from me
Some you may have missed, popular articles from the last month:
The comments on this article are closed.
5 comments
pmstroex 8 May, 2017
View PC info
Bought Worms WMD on a sale a while back, but it never worked properly so I had it refunded. A shame really, I was looking forward to some of that nostalgia.
Maybe I'll try again on the next sale, who knows, might work now.
1 Likes, Who?

UltraAltesBrot 8 May, 2017
Finally! Best game mode ever for local hot seat games. Maybe I should consider getting the game in the upcoming summer sale.
1 Likes, Who?

View PC info
I bought this when it became available for linux BUT it never worked and no sign of help from team17.
I got a refund as well. If it was just linux related I would have persevered and found something gentoo specific BUT even windows users couldn't launch

if this "free mode" is available for all I will re-install to try to see if it works & if this mode works then ill get the game again. BUT if it is a bolt on for the present game... no indication it will work
1 Likes, Who?

nadrolinux 8 May, 2017
View PC info
IIRC workaround for a rendering issues with mesa was included in mesa 17.0. At now this game works without problems with radeonsi drivers and mesa 17.1 (I tested it with the last update 5 minutes ago^^), however you must remove libstdc++.so.6 from WormsWMD/lib path, without that a game will not launch which is a little sad (this file is restored with an each game update).
0 Likes
Adam_eM 8 May, 2017

Quoting: nadrolinuxIIRC workaround for a rendering issues with mesa was included in mesa 17.0. At now this game works without problems with radeonsi drivers and mesa 17.1 (I tested it with the last update 5 minutes ago^^), however you must remove libstdc++.so.6 from WormsWMD/lib path, without that a game will not launch which is a little sad (this file is restored with an each game update).

Wow, that solved my problems with running the game. I was unable to launch it, thanks. The game itself is buggy as hell anyways :(.
0 Likes
While you're here, please consider supporting GamingOnLinux on: