Update: When you start a new game, make sure you tick the box for the Alien Hunter expansion mission. This will give you the ability to delay it forever, and not have the vicious new aliens appear. If you don't tick it, they will appear whenever they please. A mission for a "Locator Beacon" will appear, do not do it and you will be happily playing as normal. I still do not recommend getting this DLC. 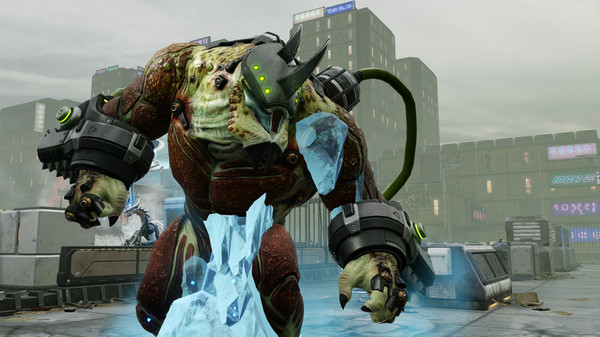 So I've been playing through XCOM 2 again, but now with the Alien Hunters DLC enabled and my god it's frustrating.

To get this out of the way: I freaking love XCOM 2, I think it's an incredibly challenging game, that keeps me coming back for more. I like that it's challenging, I enjoy thinking up different strategies when I've failed numerous times.

This DLC however, ruins it for me.

The new "boss" aliens it introduces are horrifically overpowered, break the turn-based system since they get to move after what looks like every action you take and they can turn up anywhere.

The turn system being equal on both sides is one of the things that should have never been touched, it helps keep the balance of the game. Having an enemy that can weave in and out of every decision you make just makes all your possible plans pointless.

In my latest playthrough I was maybe four missions in, when you're still starting out and have bugger all gear and a boss Viper appeared. It slaughtered a few of my men and then escaped only to show up again in another mission shortly after and slaughtered another squad.

I'm going to be honest, I feel like these boss aliens were only put in to make the game noticeably harder without the developers truly thinking about their design or the balance of the overall game.

I have to say I have not been enjoying the DLC. This is all while playing it on Normal difficulty, so it's not even supposed to be this insanely hard.

XCOM 2 is great, this DLC is not. I will be turning this DLC off in my list and restarting my game, again. It appears a lot of the Steam user reviews completely agree with me on this too.

I hope in future they spend more time fixing the vast amount of bugs the game still has, and not on gimmick DLC like this. Article taken from GamingOnLinux.com.
Tags: DLC, Initial Thoughts, Steam, Strategy
0 Likes
We do often include affiliate links to earn us some pennies. We are currently affiliated with GOG, Humble Store and Paradox Interactive. See more here.
About the author - Liam Dawe

I am the owner of GamingOnLinux. After discovering Linux back in the days of Mandrake in 2003, I constantly came back to check on the progress of Linux until Ubuntu appeared on the scene and it helped me to really love it. You can reach me easily by emailing GamingOnLinux directly.
See more from me
Some you may have missed, popular articles from the last month:
The comments on this article are closed.
18 comments
Page: 1/2»
rustybroomhandle 22 June 2016 at 10:42 pm UTC

I have seen this criticism on Steam forums.

So far I have been lucky - no boss casualties yet. So far have killed the first two, with the third one at about 30% of his health. It is difficult with their boss reaction thing, but there are strategies for it. Things like Bladestorm help, so do mines, the decoy etc. It definitely helps to not start that chain until you have some decent armour and weapons researched/equipped. The specialists restoration ability is also handy since the boss tends to alternate between soldiers instead of focusing on one at a time.
1 Likes, Who?

rustybroomhandleI have seen this criticism on Steam forums.

So far I have been lucky - no boss casualties yet. So far have killed the first two, with the third one at about 30% of his health. It is difficult with their boss reaction thing, but there are strategies for it. Things like Bladestorm help, so do mines, the decoy etc. It definitely helps to not start that chain until you have some decent armour and weapons researched/equipped. The specialists restoration ability is also handy since the boss tends to alternate between soldiers instead of focusing on one at a time.

The problem is they can appear any time, like my game before I get any of the special abilities or equipment. It completely throws off the balance.

If it only triggered them once you reached a certain tech level, I might have actually enjoyed it.
0 Likes
rustybroomhandle 22 June 2016 at 10:53 pm UTC

liamdaweIf it only triggered them once you reached a certain tech level, I might have actually enjoyed it.

They only start showing up after you take that mission to go investigate the cave.
1 Likes, Who?

liamdaweIf it only triggered them once you reached a certain tech level, I might have actually enjoyed it.

They only start showing up after you take that mission to go investigate the cave.

They do not, maybe they are supposed to, but they don't. I have never even heard of such a thing.

My game gave me some sort of introduction to the enemy, like I was supposed to know about it.
0 Likes

Mountain Man 22 June 2016 at 11:22 pm UTC
View PC info
And this is why I'm glad I held off on buying the "season pass", because so far, the DLC has been very underwhelming. Hopefully "Shen's Last Gift" will be worthwhile since it adds a new class, and then, maybe, Firaxis will get to work on a proper expansion.
0 Likes

View PC info
So, I have the DLC since I got the season pass and have started a game with it but haven't done the cave story mission yet so I haven't seen the rulers yet. I seem to recall there was an option when starting the game to have the cave mission or not, maybe if you don't enable it they can show up randomly? They're not supposed to until after you do it, since it introduces you to them (plus voice logs from Dr. Vahlen). I guess the option is there so you don't need to do the whole mission on subsequent playthroughs, but then maybe the rulers just show up randomly.

Jake Solomon talked about the rationale for making the rulers attack after every action in one of the streams Firaxis did around the time it was released. I think the gist of it was that if you just have a unit with a whole ton of HP, players will set it up so it discovers them on the enemy turn, then take all of their actions on it and take it down in one turn (like people tend to do with Sectopods; they're dangerous if they get a turn off, but set up the encounter right and it's possible to take one down in one turn and have actions left over). Hence the idea was to break out of the usual mold for experienced players, by not letting them simply cheese every fight in the same way.

And hey, if you don't like it, that's fine. I may not enjoy it myself when I get to it, I still need to see. Just wanted to explain the rationale behind it (that it's a way to give experienced players a new type of challenge where their usual strategies don't work as well).
1 Likes, Who?

View PC info
They better have some pretty big rewards once you finally kill the bastards. I mean you are likely to loose ALLOT of soldiers to them early on wreaking your economy.

UPDATE: I somehow managed to find this for $44AUD which is about 35USD in DELUXE version, so I grabbed that considering the steam sale is unlikely to be more than %50off anyway. Got Kane and Lynch 2 for free as a bonus (pfft).
So it looks like I will be able to play this soon, and test performance on my 390x with AMDGPU-PRO drivers.

PhiladelphusHence the idea was to break out of the usual mold for experienced players, by not letting them simply cheese every fight in the same way.

Not easy, but still sort-of possible to set up traps for them, but it requires you to see the ruler before it sees you by using a concealed ranger. And even this way you pretty much only get one overwatch pewpew worth of ambush.
0 Likes

View PC info
It is very weak DLC, nowhere near to the Enemy Within -- the rulers can be a problem at the first encounter but afterwards it goes like: 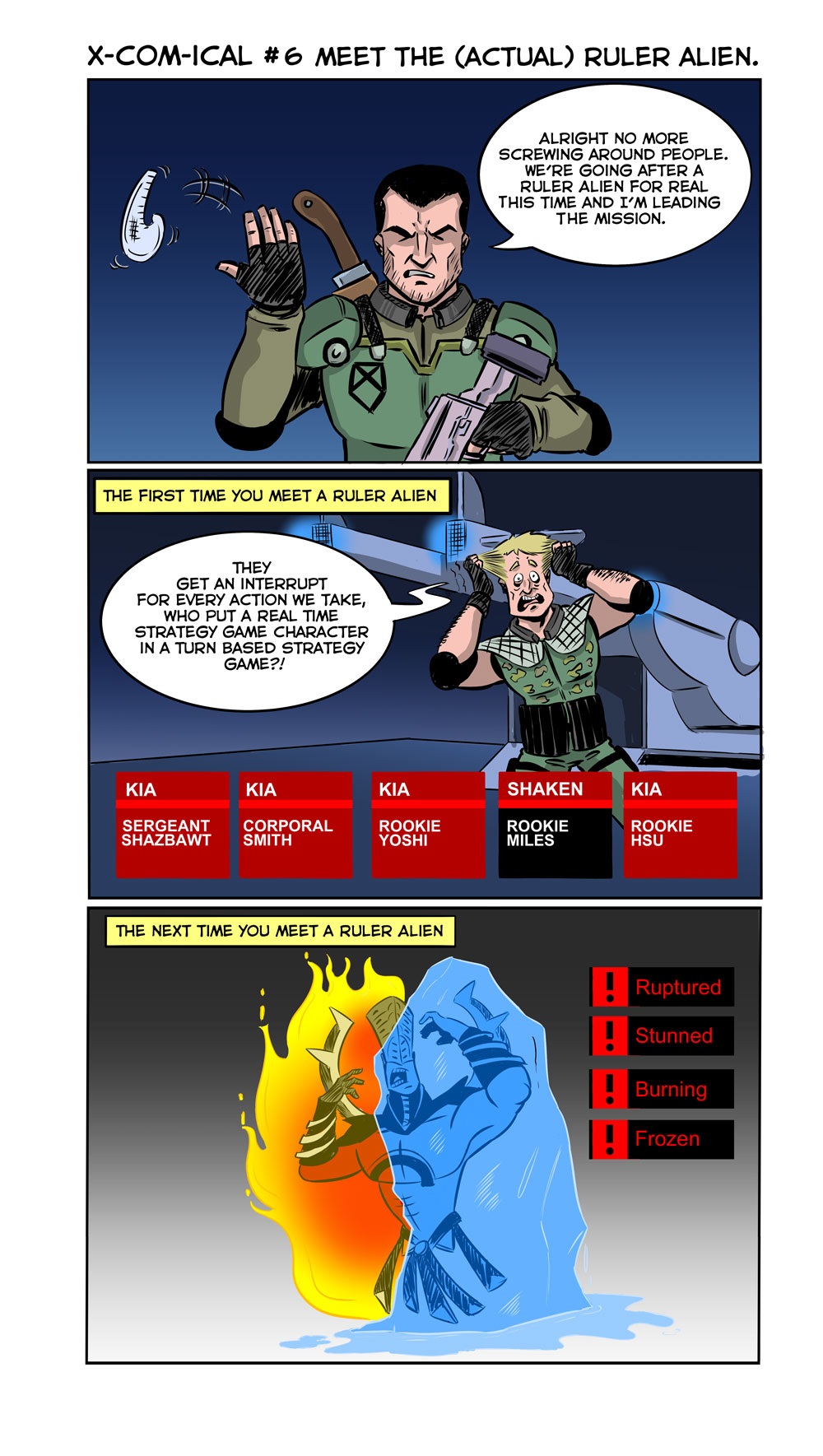 Oh, another trick that's handy: Rulers only react when you use action points. So things like Lightning Hands and free actions from weapon mods don't trigger reaction. Rangers can make two blade attacks this way - one direct one and one when the ruler reacts. Of the special weapons they give you, the pistol, axe, freeze grenade - these tools are all there to help ease up these encounters.