I’m a massive fan of the original UFO: Enemy Unknown (X-COM: UFO Defense) game and the re-make XCOM which was ported over by Feral Interactive, so to have XCOM 2 on day 1 is excellent. I'm going to be honest, this has been one of the most exciting games to come in the history of Linux gaming for me. Sadly, the initial release has not lived up to my expectations.

Note: It’s another Linux port where Intel and AMD are not currently supported. It doesn’t mean it won’t work, it’s just not supported right now.

The good news is the multiplayer is cross platform! As they announced on Twitter:

When #XCOM2 launches tomorrow on Mac & Linux it will feature cross-platform multiplayer across Mac, Linux and Windows! You ready for that?

Obviously take this with a pinch of salt considering my hardware, Intel i7 and Nvidia 980ti. Nvidia driver version 355.11.

I've only been able to spend a few hours with it today, so a full review will come later.

It's another title to use Feral Interactive's new launcher system and it's quite nice. I love any game that allows me to pick resolution, and what monitor before it launches and tries deciding it all for me and screwing itself up. Although, that's not really an issue for me now I'm on a single monitor, but for people using more than one monitor it's going to help a lot. 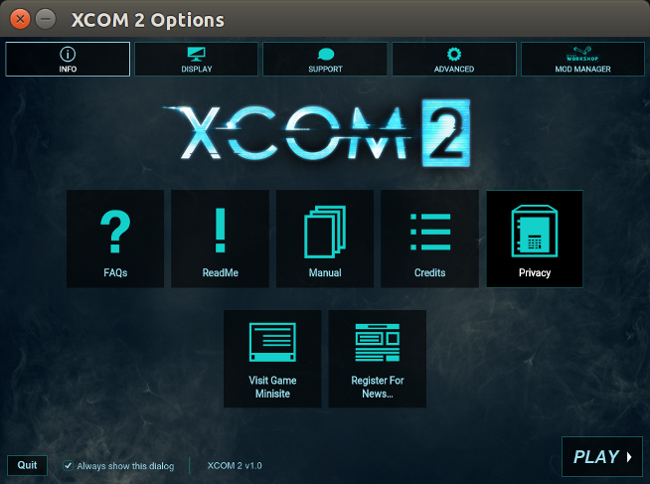 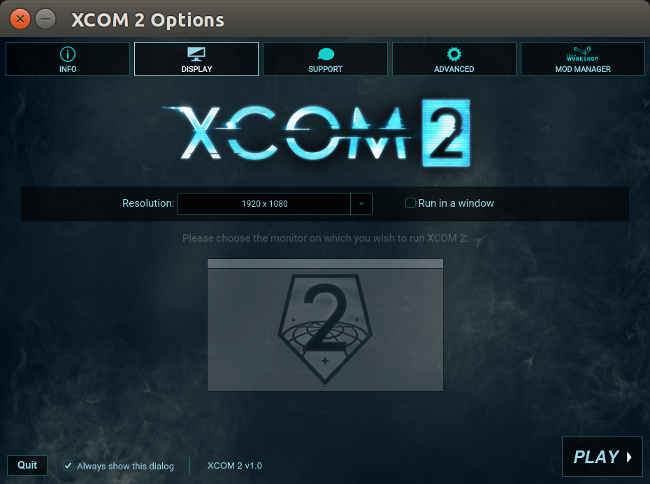 The auto detect graphical settings sets everything to the lowest it can, even with my 980ti so I had to fiddle about with all that at the start. That was slightly annoying, but not a major issue as they do have a "preset" option, so I cranked it up to High.

We seem to only have either disabled, or FXAA for anti aliasing options. FXAA looks pretty bad, so I'm not too happy about it. I know Windows has MSAA, so I would have liked that option on Linux even if it hit performance more, it would still look a lot better. See how it looks on High at 1920x1080 below: 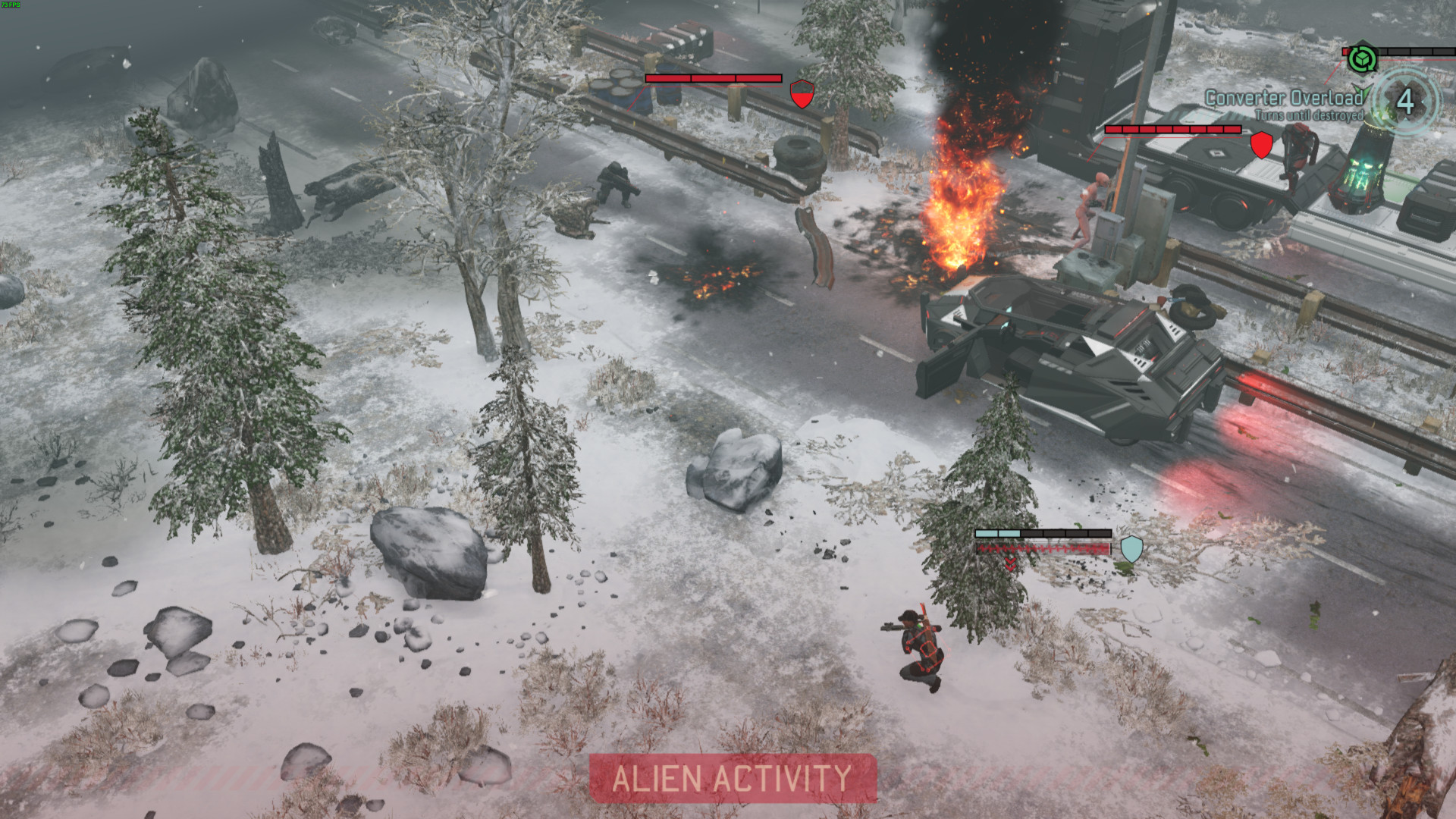 You can clearly see jagged edges all over my soldier, not looking good at all.

The first time I fired a weapon the game stuttered so badly it basically skipped the entire firing sequence, and jumped to a dead Advent soldier on the floor. I heard it all happen, but didn't get to see it which was disappointing for sure. It seems to happen each time a new type of weapon is fired, this is a common issue with Unreal Engine games (Storm United and Borderlands 2 both suffer from it). I really do hope Feral manage to nail this issue down, as it's quite concerning as you miss a fair bit of action. I won't spoil it (yet), but there's an incident with a grenade, and it became a three part slideshow.

An issue that the Linux version seems to share with Windows is how long it takes for each turn to start, sometimes there are random pauses before anything happens, as if the game is loading and trying to catch up with itself. I've seen it happen for other reviews videos, so it's not a Linux issue. The game just doesn't seem to be optimised.

Another issue (which is a game issue, and not Linux related) is the camera, and how terrible it is at times, here's a perfect example: 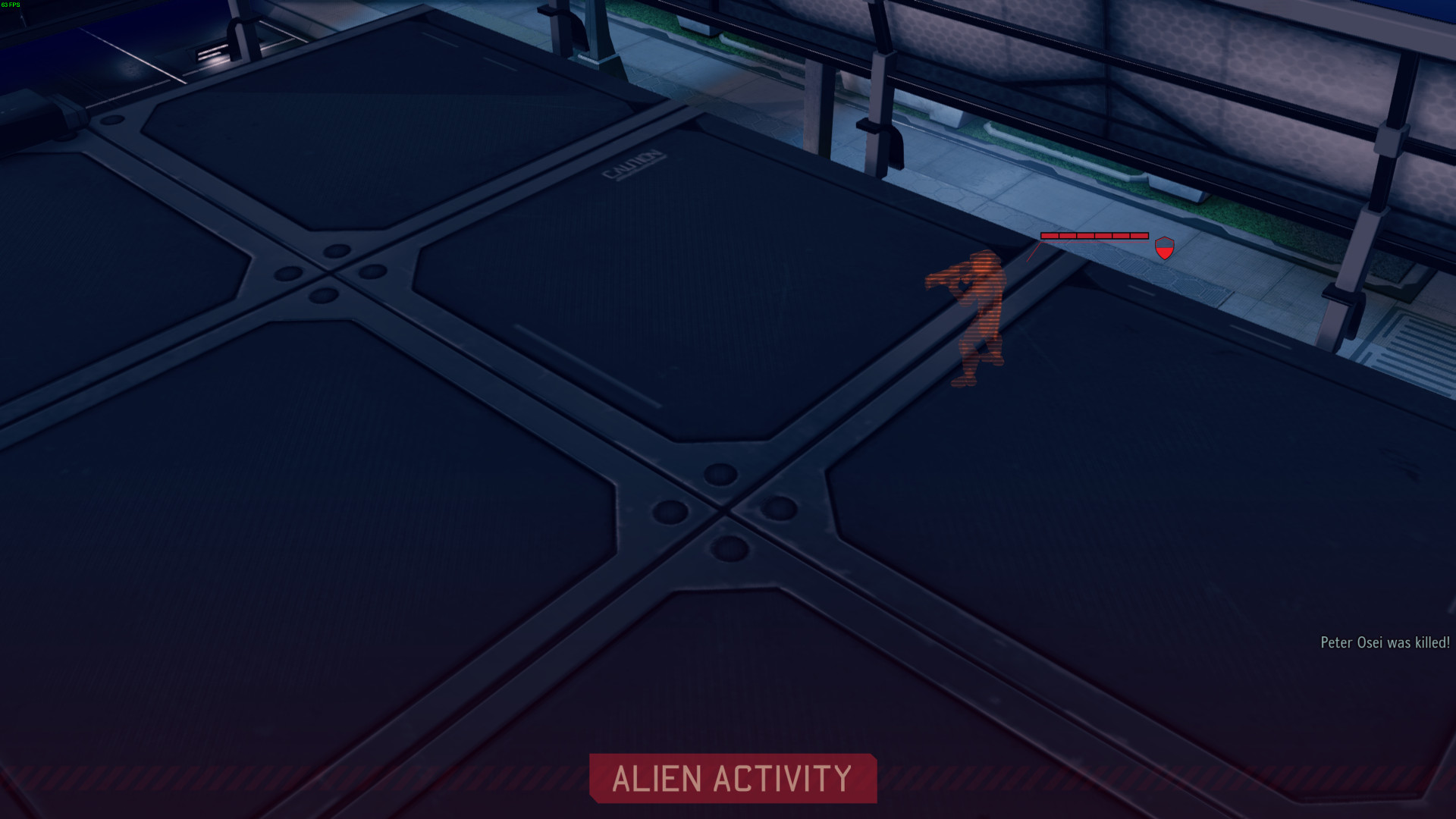 Do you know what's going on? I don't. I mean I know someone died, but I didn't see shit. They really need auto rotation. They needed it in XCOM, and they need it here too.

There is a bit of stutter when you're scrolling around, it's not too bad, but hopefully something that can be worked on.

When you get back to your base, the performance goes down even more. I was getting 30FPS and below while viewing my base.

1920x1080
I decided to tone it down to 1920x1080 resolution to see what the difference was. There was zero difference on the base view, with it still struggling to hit 30FPS on High.

During a mission the FPS at this resolution was a bit more acceptable between 40-70, but it does dip right down to 40 quite often. It's a little more acceptable, but still quite bad.

I would definitely turn off the action camera, it's distracting and slows things down even more. This is also true on Windows, and I hated it in the first XCOM too.

I turned the game down even further to Medium settings, but still keeping it at 1920x1080 (I refuse to game at lower than that on a 980ti). It's now properly acceptable hovering between 70-90+ FPS. If the AA options weren't so terrible, it would be slightly more enjoyable on Medium.

I failed the first proper mission (the one after the tutorial) twice, so it's exactly what I expected. It's good to be back, it's damn good, but wow is the difficulty higher.

Once you have played it for a while, if you quit the game entirely to the desktop and then re-load it, the stuttering is somewhat improved. This is usually down to cache issues (reloading it with stuff already loaded and ready), but I honestly don't care what's causing it and why it can't be done before the actual gameplay. The problem is, it just should be done before you play it as it gives a terrible impression.

If you do come across this issue below, load a saved game from before you entered the mission and it fixed it for me.
There's also the issue of the colour of the game, compare these images to the image at the top of the article. The shadows here are purple and surfaces are bright blue. Feral are aware and say it happens on Windows too, but they are waiting to hear from Firaxis if it's intentional or not. I really don't think it is (as it looks terrible and it's a completely different colour palette), but I will wait and see. 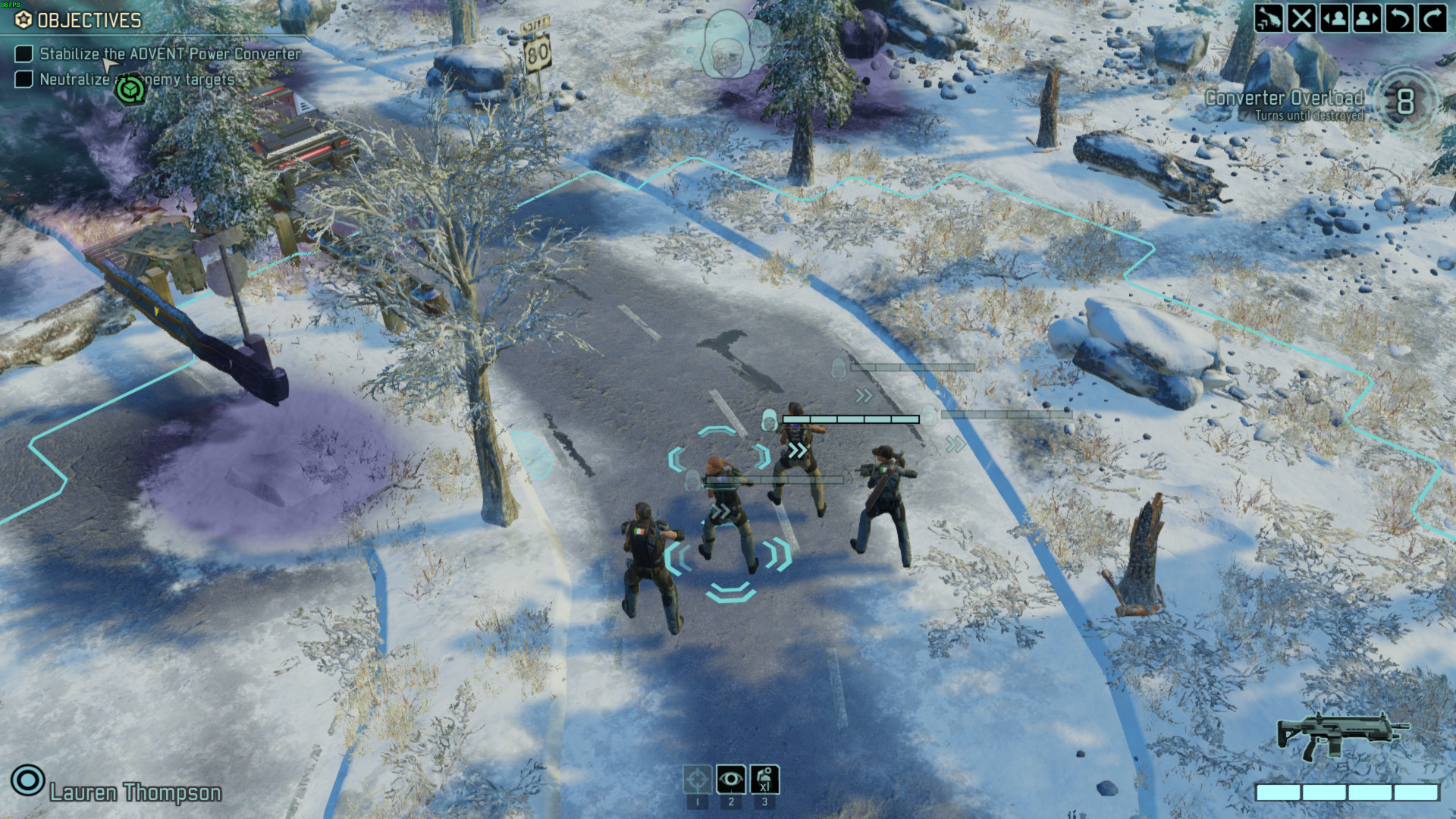 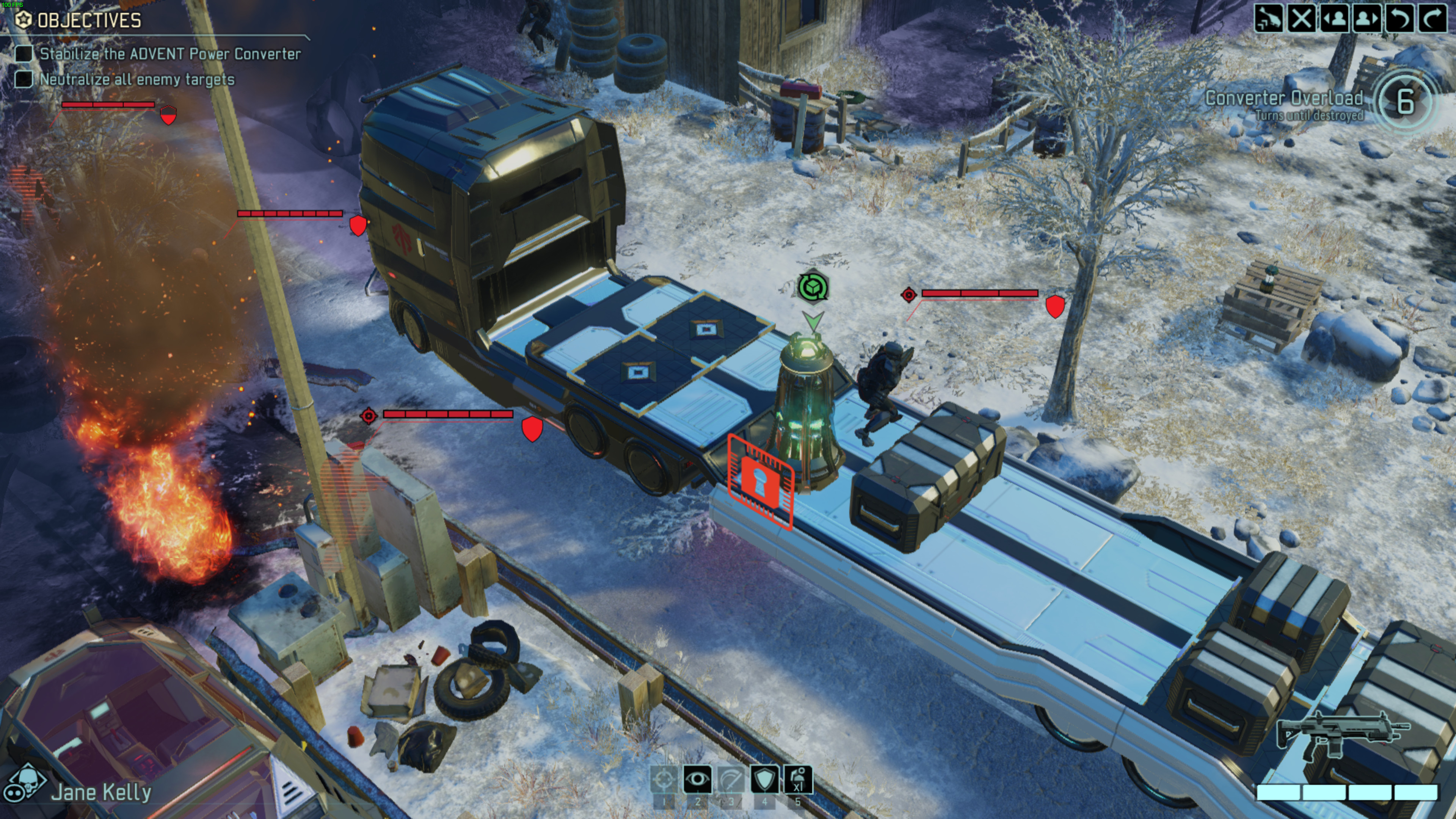 The game also seems to pause when it doesn't have focus, which can be annoying at times.

Ending thoughts: Performance really is a let down, as is the missing MSAA option. The time it takes parts of the turns to complete is frustratingly slow, as you wait for the game to realize something has happened. I will take another proper look at it after some patches, and when I have put more time into it. Honestly, for the moment I really would hold off and wait for some performance patches.

The actual gameplay is good though, the performance is just all over the place.

Earth has changed. Twenty years have passed since world leaders offered an unconditional surrender to alien forces. XCOM, the planet’s last line of defense, was left decimated and scattered. Now, in XCOM 2, the aliens rule Earth, building shining cities that promise a brilliant future for humanity on the surface, while concealing a sinister agenda and eliminating all who dissent from their new order.

Only those who live at the edges of the world have a margin of freedom. Here, a force gathers once again to stand up for humanity. Always on the run, and facing impossible odds, the remnant XCOM forces must find a way to ignite a global resistance, and eliminate the alien threat once and for all.

The game can also be purchased with a Steam Controller (with 40% off!) as it has native integration, so hopefully when the performance is sorted I can sit back on my sofa and relax with my Steam Machine.

You can find XCOM 2 on Humble Store and Steam.

We do often include affiliate links to earn us some pennies. We are currently affiliated with GOG and Humble Store. See more here.
About the author - Liam Dawe
I am the owner of GamingOnLinux. After discovering Linux back in the days of Mandrake in 2003, I constantly came back to check on the progress of Linux until Ubuntu appeared on the scene and it helped me to really love it. You can reach me easily by emailing GamingOnLinux directly.
See more from me
Some you may have missed, popular articles from the last month:
The comments on this article are closed.
75 comments
Page: 1/8»

View PC info
Hopefully they add in a MSAA option soon, though, if TB's video is anything to go by, MSAA tanks framerate hard on Windows.
1 Likes, Who?
Renzatic Gear 4 Feb, 2016
Bah. I see people on my Steam list playing the game, yet it's telling me I still have to wait 5 hours.

View PC info
Why I'm not a rich man? I can't buy more games until the next month!!!
2 Likes, Who?

View PC info
Sounds like it's the old OpenGL issue of only compiling shaders when they get used (hence bombing framerates for new weapons)
1 Likes, Who?

Liam Dawe 5 Feb, 2016
View PC info
Updated with a screenshot of another issue the Linux client has.
0 Likes
Uncleivan 5 Feb, 2016
The game looks actually worse and less smooth then the first xcom (gtx 960 here) hopefully they will fix it.
0 Likes

Nyamiou 5 Feb, 2016
That somehow what I expected for a day one Linux release. Sadly games releases without bugs are a thing of the past.
0 Likes

View PC info
yeah, performance isnt too great :( game seems good though and its playable, but those heavy drops make it pretty bad

Mountain Man 5 Feb, 2016
View PC info
It sounds like XCOM's wonky camera problems made their way into the sequel. That's a shame.

Also, reading the official Steam forums, seems that even Windows users are complaining about poor performance and bugs, so it's not just Linux.
5 Likes, Who?
Renzatic Gear 5 Feb, 2016
Out of curiosity, you have to play a game for X amount of hours before it's counted as a Linux sale in Steam, correct?

I ask because I can jump between Windows and Ubuntu, and make a direct comparison of the performance between the two platforms, but I want to make sure this counts as a Linux purchase before I make the attempt.
2 Likes, Who?
1/8»
While you're here, please consider supporting GamingOnLinux on: