This website makes use of cookies to enhance your browsing experience and provide additional functionality -> More info Deny Cookies - Allow Cookies
⨯ We're live now on Twitch!
⨯ Check out our Monthly Survey Page to see what our users are running.
Favourite Linux IDE?
Cedron commented on 11 May 2019 at 3:14 am UTC

Generally, on Linux, my "IDE" has been a text editor and a command line. I try to format my code clearly enough so that syntax highlighting is unnecessary. I realize that many people programming are younger and have known nothing but color coded editting. That's progress, I guess.

Earlier this year I found the Gambas. Gambas is a VB like, but vastly improved, IDE for developing desktop applications (or command line) in Linux. Since VB6 has always been my favorite programming environment, finding Gambas was way overdue, and a very pleasant surprise. I don't know why I hadn't found it before, it has been around for quite some while and is fairly mature.

It is not really a game development platform, though I am using it as such, in a sense. (If anybody wants a shared library for gamepad input, let me know, I wrote one.)

If you are interested, I suggest you start with the sample programs I posted on a Gambas forum:

"Programming is supposed to be fun" at https://forum.gambas.one/viewtopic.php?f=4&t=674

Ever seen a scrollbar act like a cannon with recoil? You'll find it in the second example.

It is absolutely the best IDE for learning how to program I know of. The nice thing is you will never "outgrow" it. It is a byte code interpreter though (but so is Java and Python, excepting JIT which Gambas has too). It is really easy to call C .so libraries, so anything computationally heavy can also be tackled.

It is Linux specific, but it is supposed to work on Raspberry Pi.

CedronGenerally, on Linux, my "IDE" has been a text editor and a command line. I try to format my code clearly enough so that syntax highlighting is unnecessary. I realize that many people programming are younger and have known nothing but color coded editting.

Modern text editor features like syntax highlighting make even the nicest code quicker to skim and parse. And a proper IDE can help you work faster and avoid mistakes, no matter how old you are. Their features are even more helpful if you often work on code someone else wrote, like many of us do at work. And the helpfulness is proportionate to the size of the code base.

What's wrong with highlighting? It helps reading and navigating. It has been used since the first colour displays. You must be a dinosaur if your first computer was monochrome. I was introduced to the amazing world of programming by Turbo Pascal in Windows 98 which looked like this: 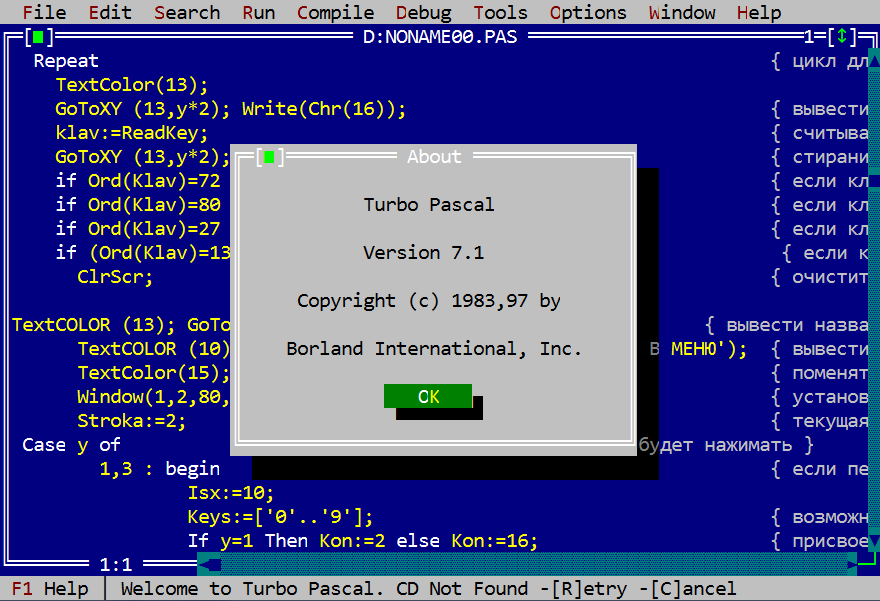 (Actually, when I was in elementary school, there were Yamaha MSX-based computers with one-colour displays, high school students used them for studying BASIC, but I never had a chance to use them.)

Well I did used to play on monochrome screens. Fond memories of the adventures of Dizzy, Prince of the Yolkfolk.

Still rocking it with emacs + ccls. Just so much quicker when you're used to pure keyboard interaction, even though there is something to be said for "lazy browsing" (click & scroll) with a mouse when exploring through large code bases.

"Monitor? You have a monitor?" he asks incredulously as he plays 52 card pick up with his punch cards.

Don't get me wrong. I like syntax highlighting a lot. The point I am making is that it is sort of a crutch for improving code readability (and it does improve readability tremendously). Thus, if that is all you are used to, then formatting your code to be readable when displayed in monochrome is not a consideration that is in the forefront in your mind, if even at all.

On the other hand, if your code is very readable in monochrome, it is even more readable in technocolor.

I.e., IDEs can make you lazy and sloppy.

I like code completion as well. It saves a lot of copying and pasting (no, you shouldn't retype variable names, this practice only encourages cryptic naming conventions, though cryptic names are okay for local variables).

How about procedure separators? Most IDEs provide them. I turn them off. Instead, I put a comment line in like thus:

That way it is part of the source file and is there no matter which context it is viewed in. As in the first example in the forum post I linked above.

ageresYou must be a dinosaur if your first computer was monochrome.

You have such a friendly way of talking to people, it warms my heart.

For me it's VS Code. Before, I used MonoDevelop.

For shell scripts I just use nano in a terminal. For those, I don't need anything more than the most basic functions of a text editor + synax highlighting (and nano has exactly just that).

I am a big fan of IDEs from JetBrains (but not blind, I did try Atom, Sublime, VSCode, Eclipse, Visual Studio and a few more obscure ones).

When working on games I tried CLion (Godot) and now I will be probably using Rider (Unity). Currently I am working on a small platformer game in Godot, using GDScript so the IDE is Godot's editor and I miss a lot of functionality from IDEA (that's one reason I am planning on going to Unity and C#, because in Godot you can either use GDScript [not supported in IDEA and the language itself has many downsides] or C++, so GDNative which is an undocumented, poorly supported and buggy mess).

For other projects I use IntelliJ IDEA usually for Haskell, now trying ReasonML for front-end needs for which Haskell, or rather its tooling, is very far from ideal.

It would take me a long time and my productivity would take a giant hit, if I would have to use feature-less editor instead of a proper IDE. For example type-aware autocompletion is priceless.

BlackBloodRumPersonally, I now prefer "Geany" simply because it is fast and lightweight and "just works" I used to love Eclipse but release after release it just felt heavier, slower and slower in the end I ditched it and went Geany. Honestly best decision I ever made!

Low-pro here. Started fiddling about with XML, CSS and wikitext again, and re-discovered Geany in the Software manager. It's an excellent little piece of software -- even if it isn't a proper IDE (?). Does all I need, and better than online highlighting, and of course the Text Editor.

Light-weight, and "it just works".

I love JetBrain products. They're so refined and customizable that i cannot use anything else anymore. I don't mind the proprietary approach used for the Ultimate version and the *Storm/*Charm versions since i care about open computing mostly when it comes to the platform (OS) and not the final applications.