Sun and Stars ability is quite useful for faster healing. I'm usually using it, unless I need to stack combat only abilities for specific reason.

Also, if you often rely on food instead of potions, you can try Gourmet.

I decided to *not* pick Sun and Stars, because I read people saying it made everything so much easier, kind of removing one of the main challenges about picking a higher difficulty. So I knew about that, just didn't want to choose it :) It was actually fun to need to manage the health, instead of insta-healing at sleep or when combat is over.

I shan't say anything this or that way, only that I was impressed. Like before, I kinda sat back in the chair and enjoyed some of the stuff happening. I've no idea who much of the story will change based on whatever you do throughout the game, though.

Am now thinking about whether to try a New Game+, or to go right into the expansions. Effectively playing through the whole game again may be a bit much, but I'm probably leaning that way anyway. Partly because I read that if you first do the expansions and then go for NG+, everything will be pretty easy again, because you are overleveled.

May need to fickle about with settings, however, as the game has been crashing from time to time suddenly, which it didn't do before. Typically when loading a new area after using fast travel, or when the game goes into a major cutscene. Not such a big deal that the sound started crackling every 10-20 hours or something, but the game crashing is a good deal worse, because then I need to start saving a whole lot more than I have done for fear I will lose important progress.


As usual I spent quite some hours just wandering about talking to people, climbing up wherever I could get some nice picturesque views, and doing various side quests and hunting "question marks". Still hundreds of them left, and I'm kinda surprised the hour count isn't even higher, but yeah.... <3 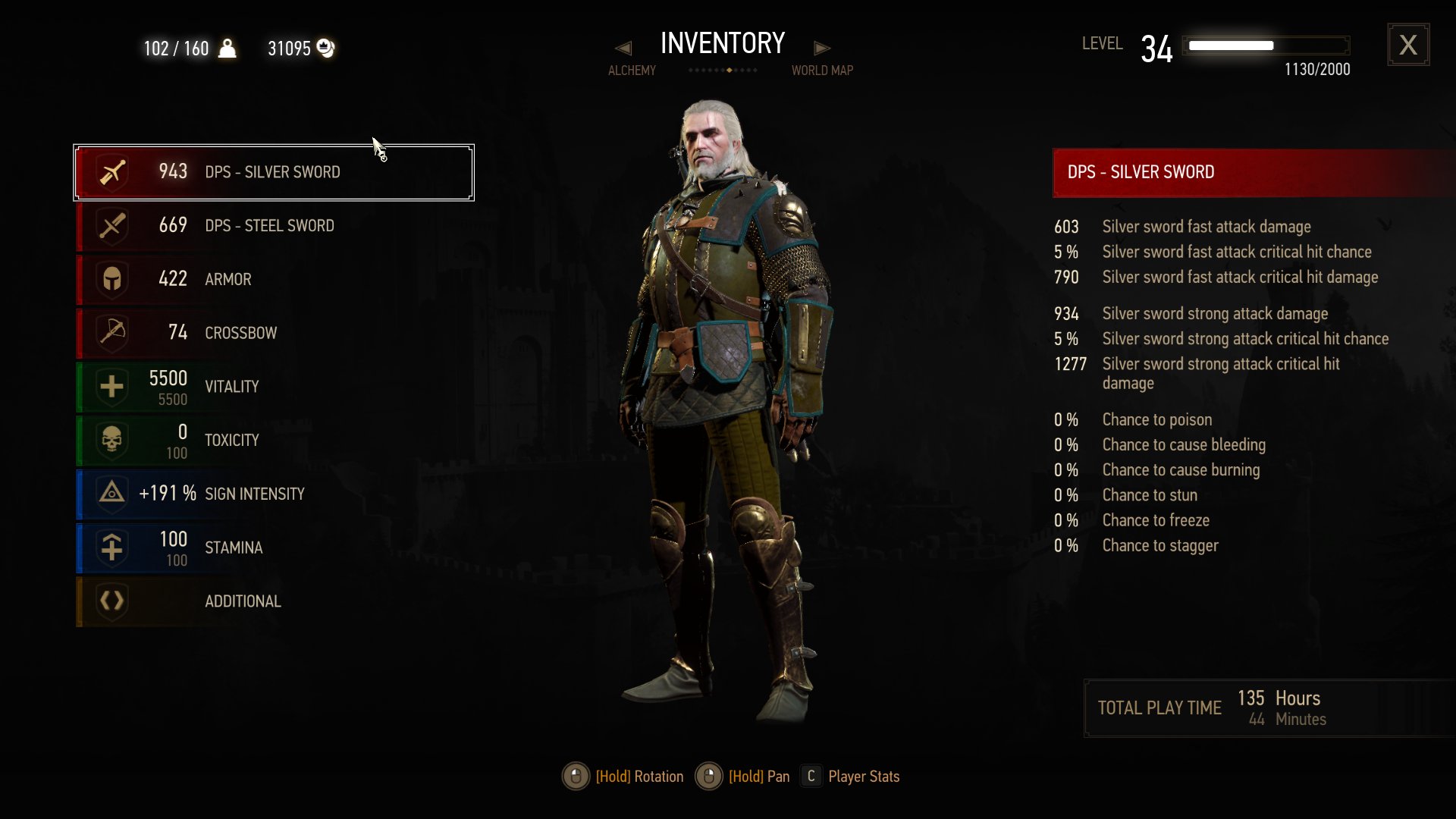 I mostly went for sign skills, though I did prefer to often use the sword against foes, instead of just blasting them with fireballs or whatever. Quen is an absolute life saver, though.

I use Sun And Stars sparingly, but yeah it makes healing easier. What difficulty do you use? I went for Blood and Broken Bones which looks like equivalent of Hard in TW1 and TW2 and I always pick hard in them (otherwise it's just too easy). I'd say, that "hard" is really normal :)

As for story - I agree. I'm very impressed with it, it's immersive, touching and you care for characters, unlike in some generic Bethesda-like games. You can see how much effort went into making it. The world itself is also very immersive.

I usulally turn off those question marks in the UI, since that's too spoilery, I prefer to explore and discover things unexpectedly, kind of what real Geralt would do. Knowing where to go from the start is not RPG-ish enough for me :) Though I guess once you play long enough, you'd want to see what's left to do, then those marks can come handy.

In my first run I focus on sword skills, though I did bump Yrden sign skill, mistakenly thinking that "increase sign intensity" buff goes on all signs in it. I don't regret though being able to place 2 traps and make them last 10 seconds longer - it's quite handy for slowing down multiple foes. Quen is surely a must, but what I find very useful is Axii. It amazingly works almost on anyone and stuns them in combat. So it's way more useful than in the first two games. I use Axii way more than Aard and Igni, which were in contrast the most common signs for me in TW1 and TW2.

Since I play in a "traditional witcher style" about which Geralt even makes a comment to Vesemir, i.e. avoid using the crossbow unless completely necessary (like shooting those drowners underwater), Axii is very useful against flying creatures, since once stunned they fall down.

By the way, that inventory screen doesn't look standard. Is it some kind of mod?

I went with Blood and Broken Bones too, just couldn't remember the name :P Mostly it felt like a good balance between challenging and story elements, and there isn't instant healing upon meditation.

The question marks weren't there from the beginning, at least I don't think so. When I pick up some board notices they are added, I think. Mostly I just go around and sometimes come over stuff, but if I were in an area with question marks I would often try to pick them up on the way to other stuff. There were way too many though, especially when I made an effort to read all those board notices. They sort of respawn on the boards, but pretty soon they are just generic notices, not tied to actual quests.

The inventory screen is standard btw, it's just the stats part (hit "C" I think it was? from the inventory screen). The only mod I'm using is to disable those videos when reloading. That got annoying pretty fast, as I keep dying. The most dangerous thing in the game, by far, is heights! :D

The skills is a bit unusual in this game, where you can only fit so many into the "tree", not like in Witcher 1 for instance. Especially if I start a NG+, there will be way more skill points than slots for skills. Right now I mostly have sign related skills, a few generic ones (like for Griffin), plus a few sword skills. All in all that probably means I played very ineffective since I mostly used swords with some signs here and there. Mostly Quen for protection, and the odd Igni. And much more rare, Aard and Anxii. And Yrden against those very dangerous noon wrights and suchlike. Died sooooooooooooo many times in those quests early on.

Funnily enough I never used any of the slots on swords or armour either. Like a typical RPG hoarder I picked up one after the other, saving it for later, and never using any of them. I did try to apply oils though, as it was much less of a pain in this game compared to the previous ones.

Sometimes I did use the crossbow to get Sirens out of the sky, but mostly I used it like you, only in the most needed drowner situations. Kept hoarding every bolt under the sun too, and stashing them away (they actually get quite heavy, when you have hundreds of the buggers! :D). So I just used the very plain ones.

Very fun game, you can definitely tell they put their heart and soul into the game. It is colossal, though, and I haven't even touched the expansions yet. And I also ignored gwent and mostly boxing. The former took way too much time and wasn't fun, and the latter is kinda silly when Geralt takes 2-3 hits and is knocked out, while your opponent needs 50 or something nuts like that. Although the QE stuff in Witcher 2 was kinda crap, I actually preferred that over the boxing in Witcher 3. It's too unfair and punishing.

PangaeaMostly Quen for protection, and the odd Igni. And much more rare, Aard and Anxii. And Yrden against those very dangerous noon wrights and suchlike. Died sooooooooooooo many times in those quests early on.

You should try Axii more often. It works wonders even on very large enemies.


PangaeaAnd I also ignored gwent and mostly boxing. The former took way too much time and wasn't fun, and the latter is kinda silly when Geralt takes 2-3 hits and is knocked out, while your opponent needs 50 or something nuts like that.

I actually find fist fighting easy, once you figure out dodging and counterattack method. I.e. same as with swords riposte, block right before the opponent lands the blow, this breaks the attack and you have a chance to land a powerful counterattack right away. That knocks them out a lot faster than regular attacks.

Gwent also gets more fun once you build up your decks and figure out the flow. But it takes time to get stronger decks. Special card abilities play a bigger role against stronger opponents, rather than raw high card stats. I try to play with every merchant and character I meet if there is such option, and buy all cards if they are sold. That's the way to build up your decks.

Regarding crossbow bolts - I also just dump then in the stash, since I have no use for them. I tried selling or dismantling them, but no one accepts them weirdly. Not sure why CDPR made it that way.
0 Likes

Interesting, I didn't notice this feature - I'll try it out. As for skipping videos, I don't think you need a mod for it. It's controlled from the config file. In your user.settings you can add:

Thanks, maybe that's all the no-storybook videos mod does then.

Tried out "IconText - Combined" mod yesterday (it adds descriptions to some items like potions, without the need to hover), but the game kept crashing to desktop when I loaded a save. Removed it and it was fine again. Figured I had to try out the Nexus Mod Manager, in case that fixes mod conflicts -- but how do I get it working on Linux?

Don't want to change major stuff like combat, AI or other gameplay as I like the vanilla game, but think I'd prefer to look into some UI and otherwise handy mods, like better sorting, zoomed out minimap, that sort of thing.

Accidentally used Axii against some bears, which was very effective. Especially towards the end of the game I tried to use signs more for variety, but mostly I prefer to use swords and spam Quen for protection. Simple, but fun :)

A good while back I actually looked up some videos about how countering is supposed to work, but guess I never got the timing right. Kept getting smashed in the face instead, both during boxing and some easy drowner fights. So I went back to dodging. It feels more Witcher-like I guess :P Makes boxing a massive pain, though, so I mostly just ignored it.


Edit: This is the mod I tried out: https://www.nexusmods.com/witcher3/mods/863
Unfortunately the game still crashes when I only have this one enabled, so something is amiss somewhere :-/ It looked to be pretty useful.

Haha, this is kinda funny. Tried out an alternative mod, hoping the game wouldn't crash.
https://www.nexusmods.com/witcher3/mods/493

It still crashes in the same way, just after loading the save (so I can briefly glance Geralt in-game)

Then I notice the mod's folder is capitalised.... Lower-case everything, and it works :D 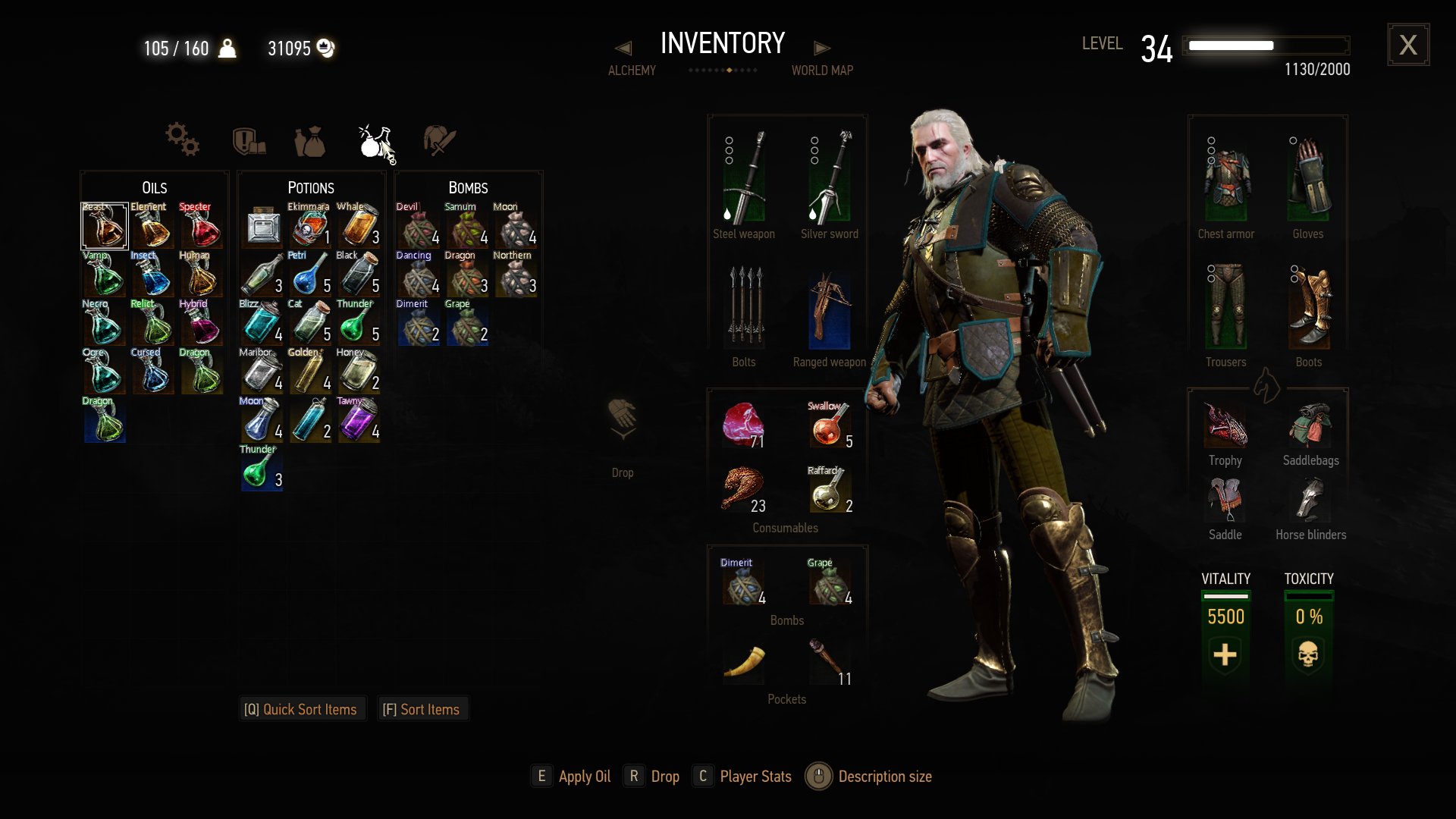 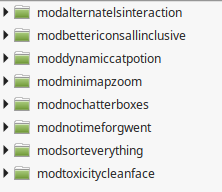 This one looks quite promising for the Cat issue mentioned previously, although it's not as good as a toggle. Apparently it's brand new as well.
https://www.nexusmods.com/witcher3/mods/3676

Don't know if all of them work yet, like the Gwent skip/cheat, but many of them are showing up properly despite being on Linux, such as the more zoomed out minimap.

Mods can require scripts merging, that's why I prefer to use them sparingly. You can merge scripts manually using some merge tools (Meld, vimdiff etc.). That's basically what that Mod manager does anyway.

Case sensitivity is a common bugger. Windows using mod makers sometimes have no clue it's a problem, since Windows obscures it for them.