This website makes use of cookies to enhance your browsing experience and provide additional functionality -> More info Deny Cookies - Allow Cookies
⨯ We're live now on Twitch!
⨯ Join us on the Linux Gaming community on Lemmy, the federated open source alternative to Reddit.
The Witcher 3 in Wine
Page: «175/179»

Not your typical "clear skies" nature shot, but I still like it. Gives a nice mood, and has many layers. 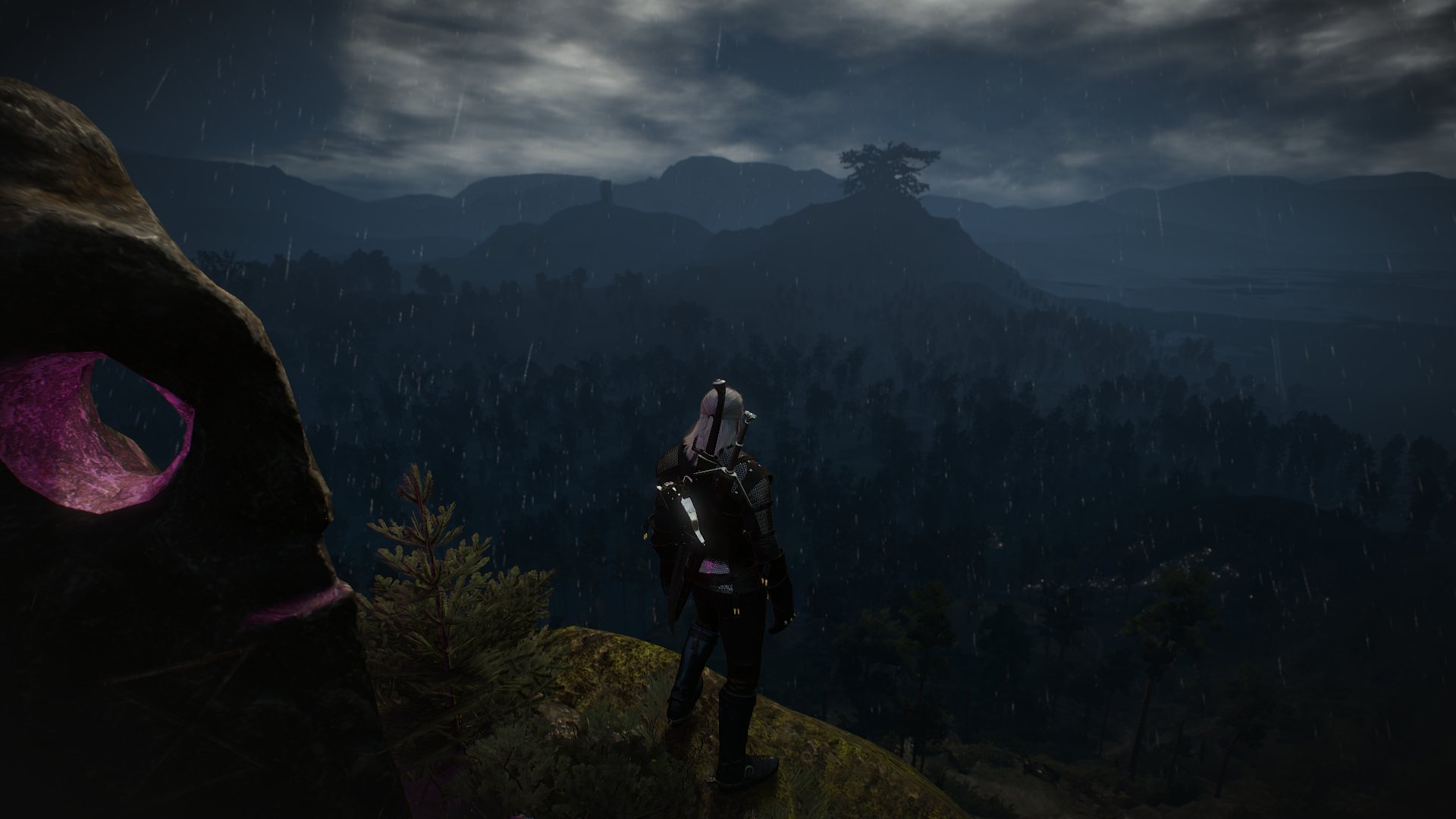 The Crones. Some details and foreshadowing here that I hadn't noticed before. Good to spend a bit more time wandering around :) 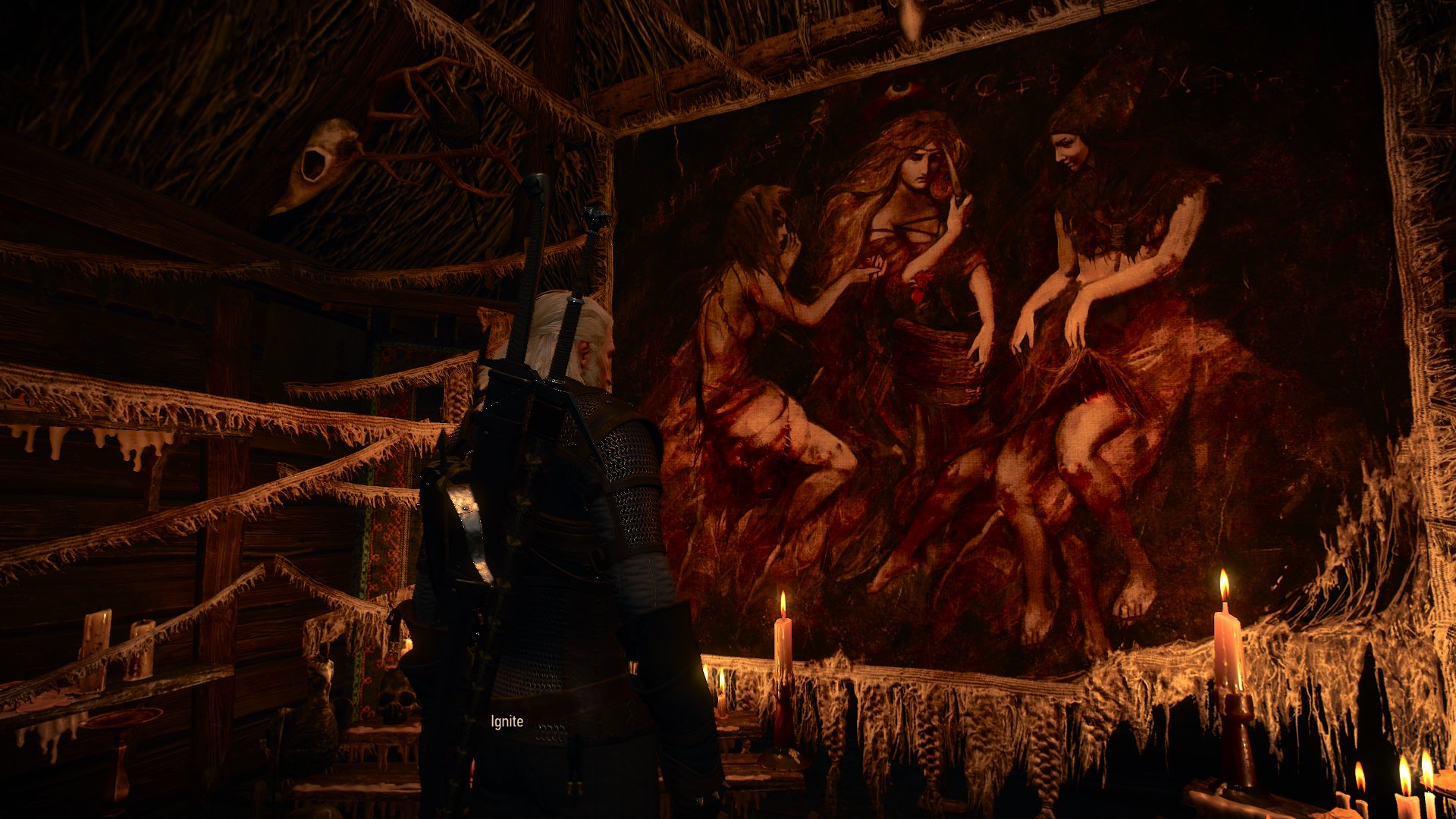 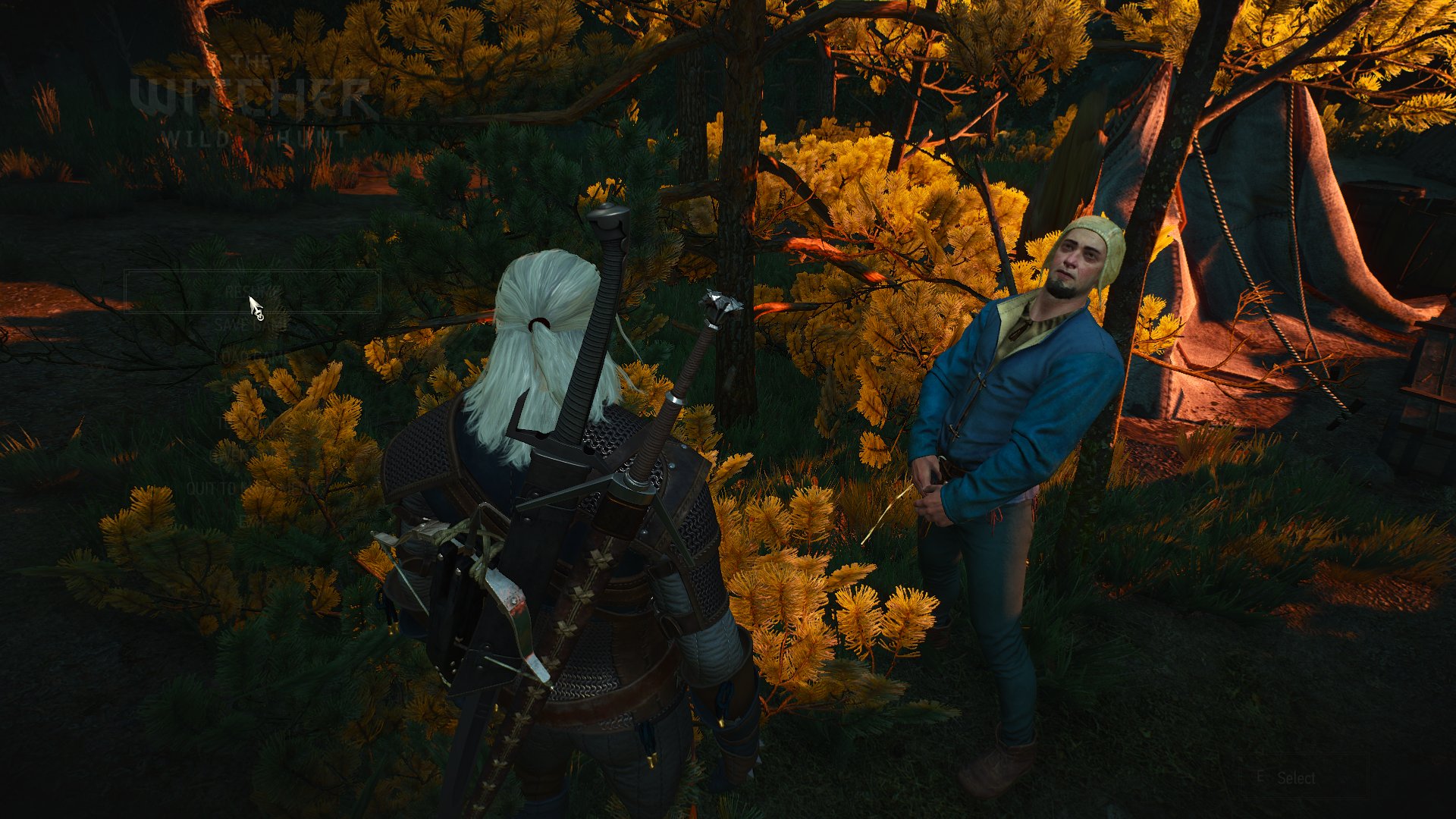 Roach is just being Roach-y. 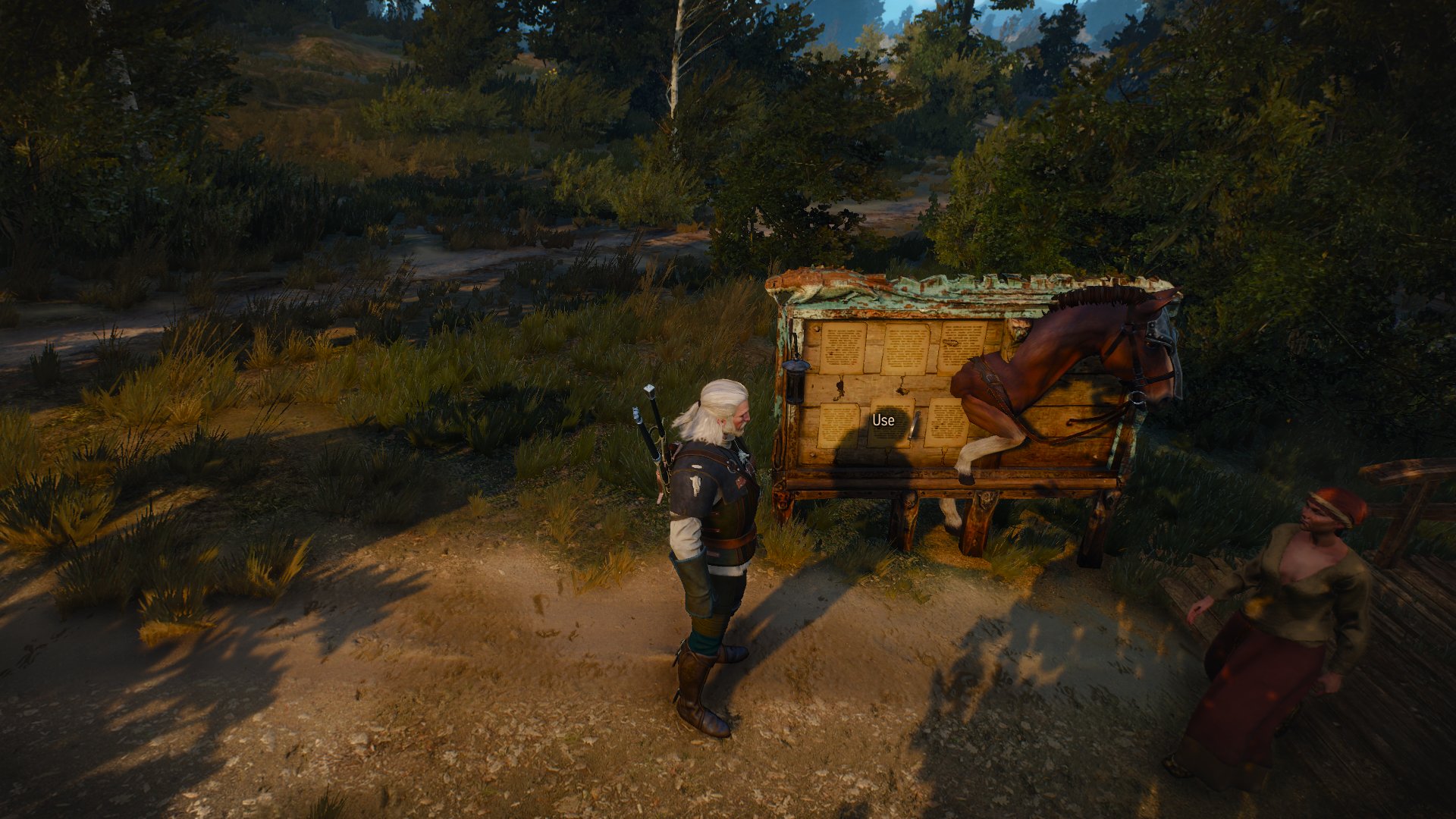 With no fast travel, I'm riding around a lot more (naturally), and have come across a few other things that I hadn't noticed before. Like when I randomly walked into this location while blindly going around Novigrad. Recognise them? 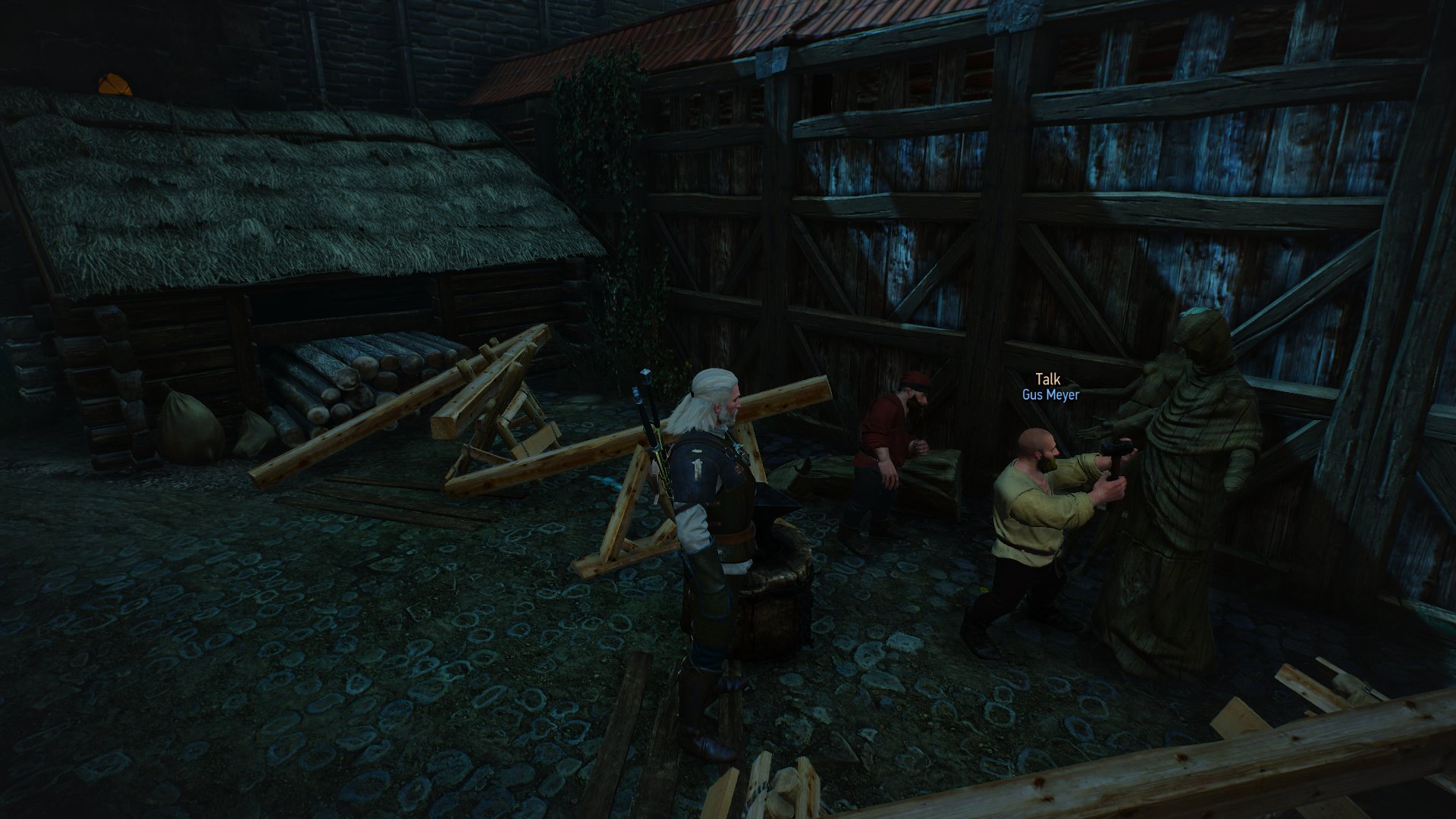 This is from a small group of people sat by the roadside somewhere while I came riding along. Turns out they talked about different things, and then the topic turned to whether one of them was a spy or not. Pretty sure I've never seen this before. If I did, it was in the first playthrough and I've forgotten about it. 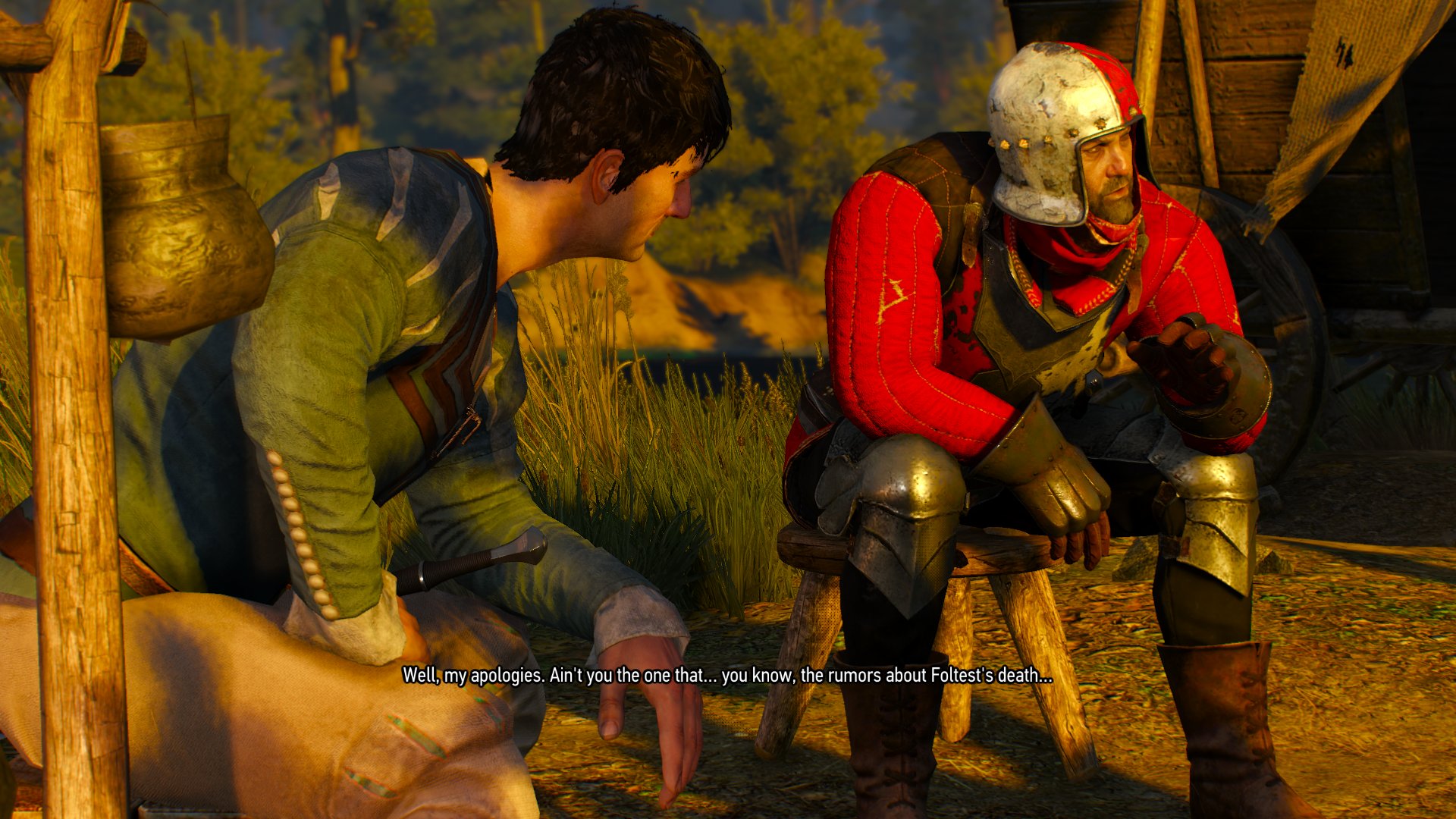 Honestly don't remember any more how the Shrieker fight was in the vanilla game, but in Ghost Mode, it's freakishly difficult. Hands down the most difficult boss fight in the game, probably also more so than the very last fights (spoiler-free).

I tried maybe 10 times while at level 8 (it's a level 8 or 9 quest in Ghost Mode (GM) iirc), and I died and died, without ever really being close. Came back at level 10 and tried again. Excruciating fight, and I'm "only" on BBB difficulty (next highest). The bird causes bleeding all the freaking time, and Swallow doesn't stop it unless the instant you take the potion. It won't stop bleeding caused while Swallow is active (don't remember if the vanilla game handles it like this too). It's quick, attacks non-stop really, aggressively walks or dodges/jumps after you. I'm using potions left and right, only to heal a little (the "potion heals" skill has been nerfed, with all points it heals 15% of max vitality). Had to use White Honey just to remove health degeneration from over-toxicity, and then go again.

Don't know how many hits were needed to bring the bugger down, but around 50 I reckon. The health bar barely moves upon hits. Very, very tricky fight, but eventually I managed to bring it down, and Geralt was able to meditate and bring his badly bruised body back into balance. Phew!


As you can see, toxicity is very high (max is 173-ish at this point) and health is in bad shape. 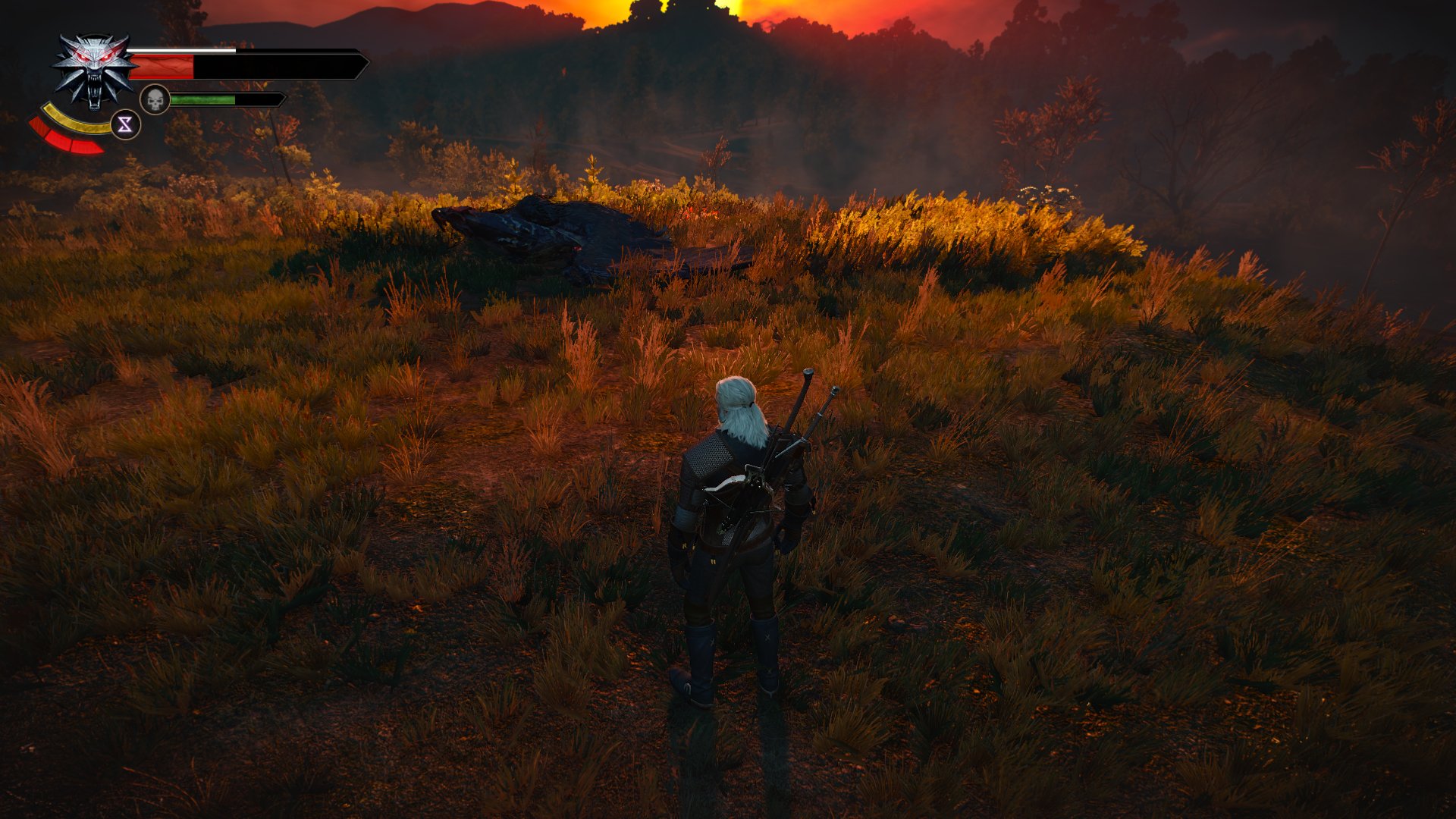 This shows that I'm bottomed out of most potions. Some were just to heal up a little bit along the way. 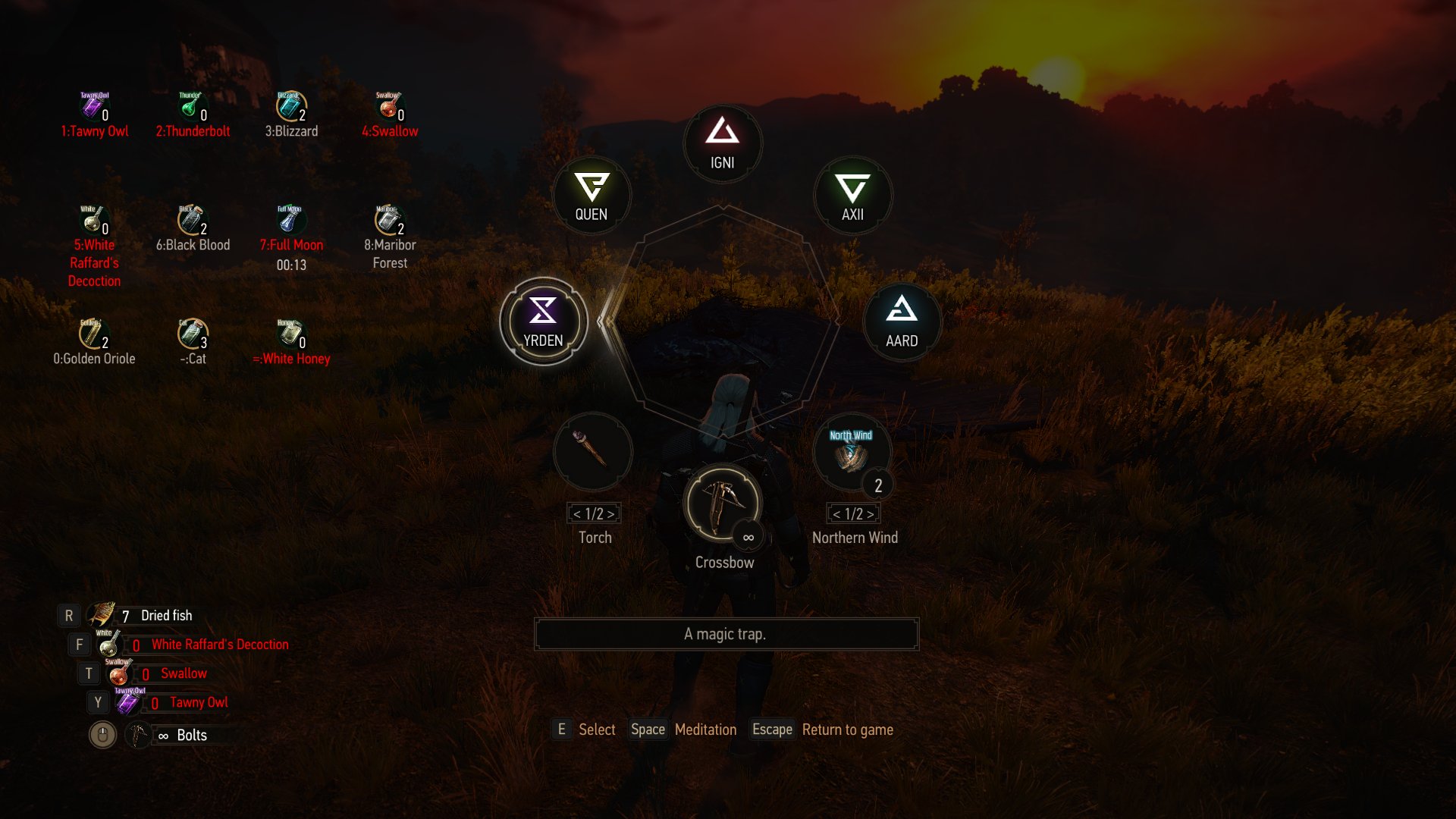 It's finally over, and Geralt can sit down and enjoy the sight of entrails and bloodied dirt. 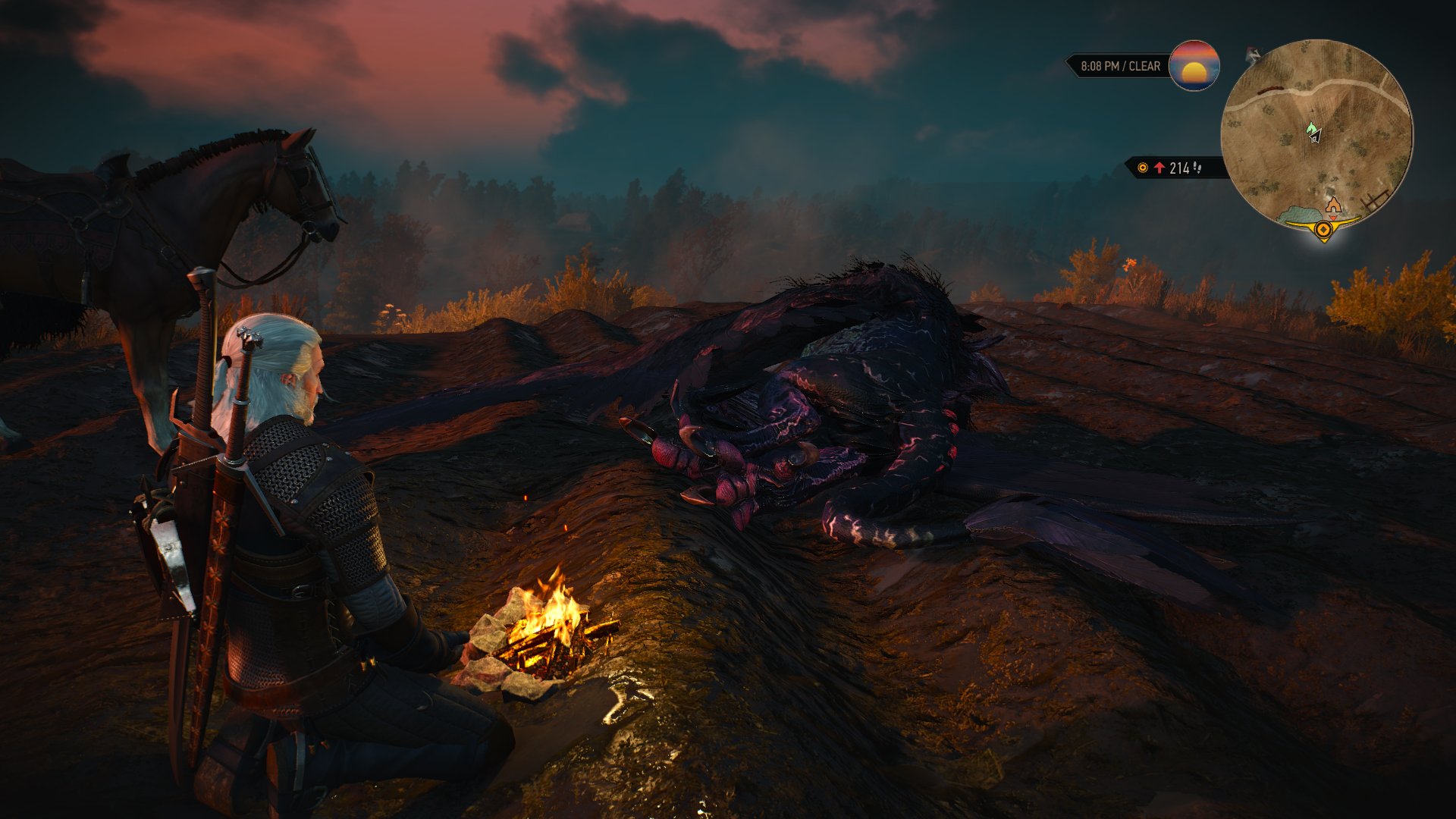 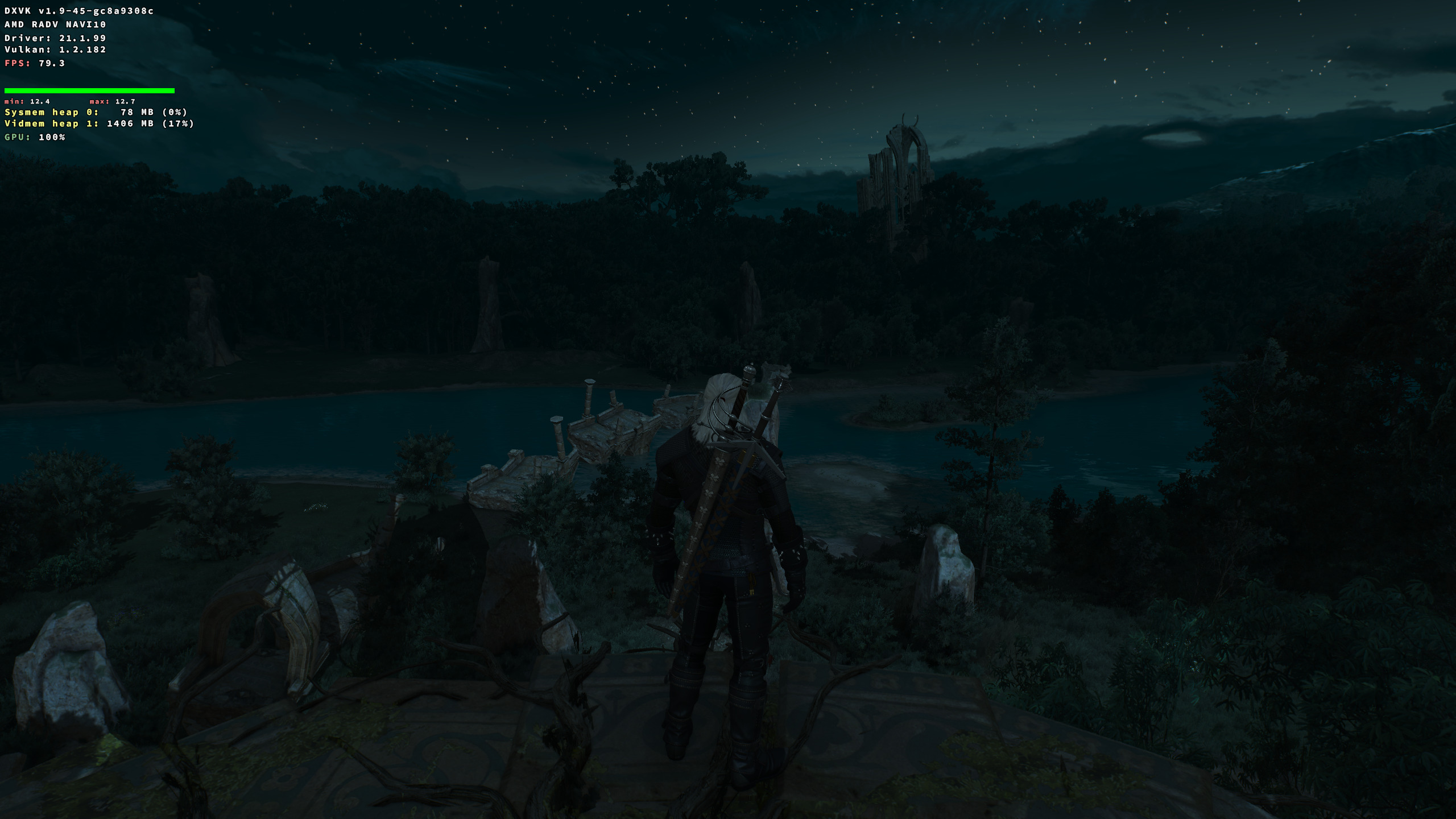 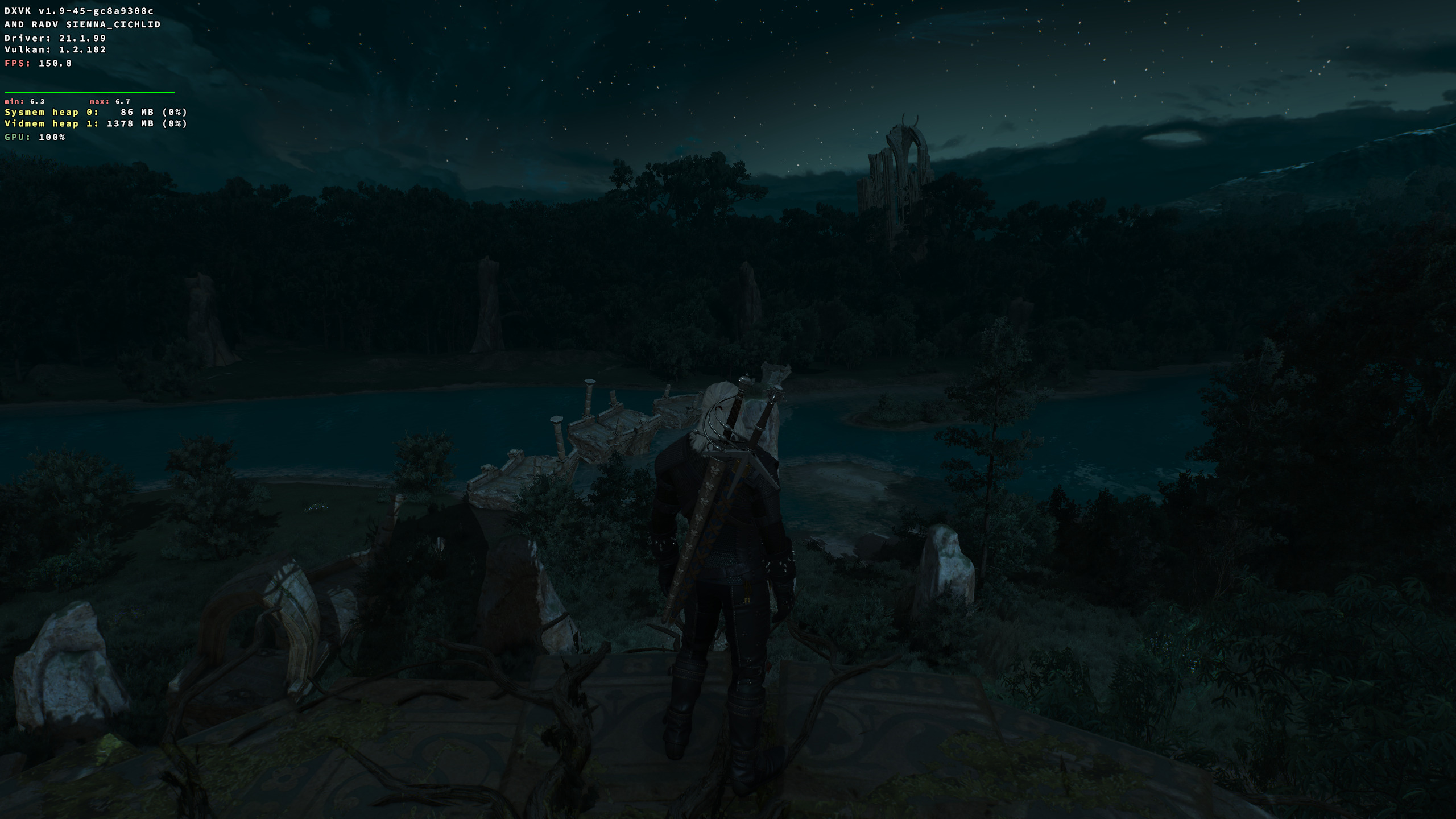 Now with this new GPU TW3 is rendering above my monitor refresh rate. But built in framerate limit is capped at 60 fps in the UI.

You can fix it by adding 144 fps option to bin/config/r4game/user_config_matrix/pc/rendering.xml

The label for it is messed up in the UI, but it works.

Do you play with that HUD up, or is it just for testing?

*plug* I've loved playing the game with nothing on the screen at all (except when combat kicks in), which is possible with Friendly HUD mod :)

PS: Depending on the fallout of the NexusMods powergrab, it's possible the mods from that author will be removed or hidden, or at least not updated any more, but in that case they will be available elsewhere, like for example GitHub.

About that config change (very nice!), it's possible to make the text show up properly as well, by making a small mod and changing the localisation. Probably not worth it for such a small thing, mind you.
0 Likes

I switch off in-game HUD for screenshots to make it look nice. I use it most of the time but minimize things in the settings. Sometimes I turn it off for fun during playing.

The DXVK HUD is just for testing / benchmarking.

Quoting: PangaeaAbout that config change (very nice!), it's possible to make the text show up properly as well, by making a small mod and changing the localisation. Probably not worth it for such a small thing, mind you.

Oh, I was looking into how to do that. Do you know what has to be added for it?
0 Likes

Quoting: PangaeaAbout that config change (very nice!), it's possible to make the text show up properly as well, by making a small mod and changing the localisation. Probably not worth it for such a small thing, mind you.

Oh, I was looking into how to do that. Do you know what has to be added for it?

I'm not entirely sure, because I haven't tried it myself. Something like this thread may be a good place to start: https://forums.cdprojektred.com/index.php?threads/utility-strings-encoder-for-adding-new-strings-new-ids-and-keys-as-standalone-w3strings-file.62959/

Know I looked at strings with a program I downloaded, either from CDPR forums or Nexus. Seem to recall one could add new strings with it too, but I don't really know the details. After that, I suppose you need to "cook" the mod so the game can properly compile and include it.

PS: Looking at downloaded mods, it may be one called "w3strings_encoder". It's an exe, but I'm sure a pro like you can get it working in Linux :)
1 Likes, Who?
« 1«175/179»
While you're here, please consider supporting GamingOnLinux on: