I like how it looks. Plus, it goes well with Ghost Mode with how I like to play the game, because in Ghost Mode all combat actions have a stamina cost (surely intended for vanilla too, but they dropped it at some point, it's half-implemented for enemies). Light armour has lower stamina costs, so then I'm able to dodge and cast the odd sign while using Cat armour, while with Medium weight and especially Heavy weight, this would be a big problem. When you run out of stamina, Geralt will struggle to move, and you are more vulnerable to attacks. This aspect is one of the big changes with the mod, and it took a little getting used to, but it makes for a more realistic and fun combat experience now when I'm used to it. With the vanilla game, apart from looks, you're kinda incentivised to go with Heavy armour, because it has better protection, with no real downsides. But when the game has stamina costs for combat actions, this suddenly is a factor to consider, and the game is probably turned on its head in a way, by incentivising Light armour instead.

It's a funny old game. I keep coming across small things here and there that I haven't seen before, or only rarely. Like currently, I want to do the Cery quest, but it's on the other side of the world. The marker shows 3000-something to travel by boat....

So I stop here and there on the way, probably going ashore to small islands I've never set foot on before. And I really did explore thoroughly before too, it's just that the game world is MASSIVE, and they've left small bits and pieces everywhere. Truly a labour of love, despite all the faults with CDPR and its development process, crunch forever and so on.
0 Likes

Quoting: MohandevirThe last run I did was a couple of months ago... I paid special attention to that shadow... When Udalryk raises his arms, while speaking to you, you should see the Hym doing the same, on the wall behind him, but no, it wasn't there. Anyway, it might be a problem depending on the Proton version used... I think I'll create a save point at this special spot and test different versions of Proton. Who knows, it might be solved with the latest builds?

Remembered there was a discussion about that shadow, and I recently played that section. Took some pictures that showed the Hym. Now I see you meant during conversation when Udalryk raises his arms, however. The room is very dark here because all lights and candles are off, so it's possible I missed it, but more likely there wasn't a Hym shadow during that particular sequence.

Unless it's this one? Think this was while talking to Udalryk, but I'm not entirely sure as you can't really tell what persons are part of the screen. 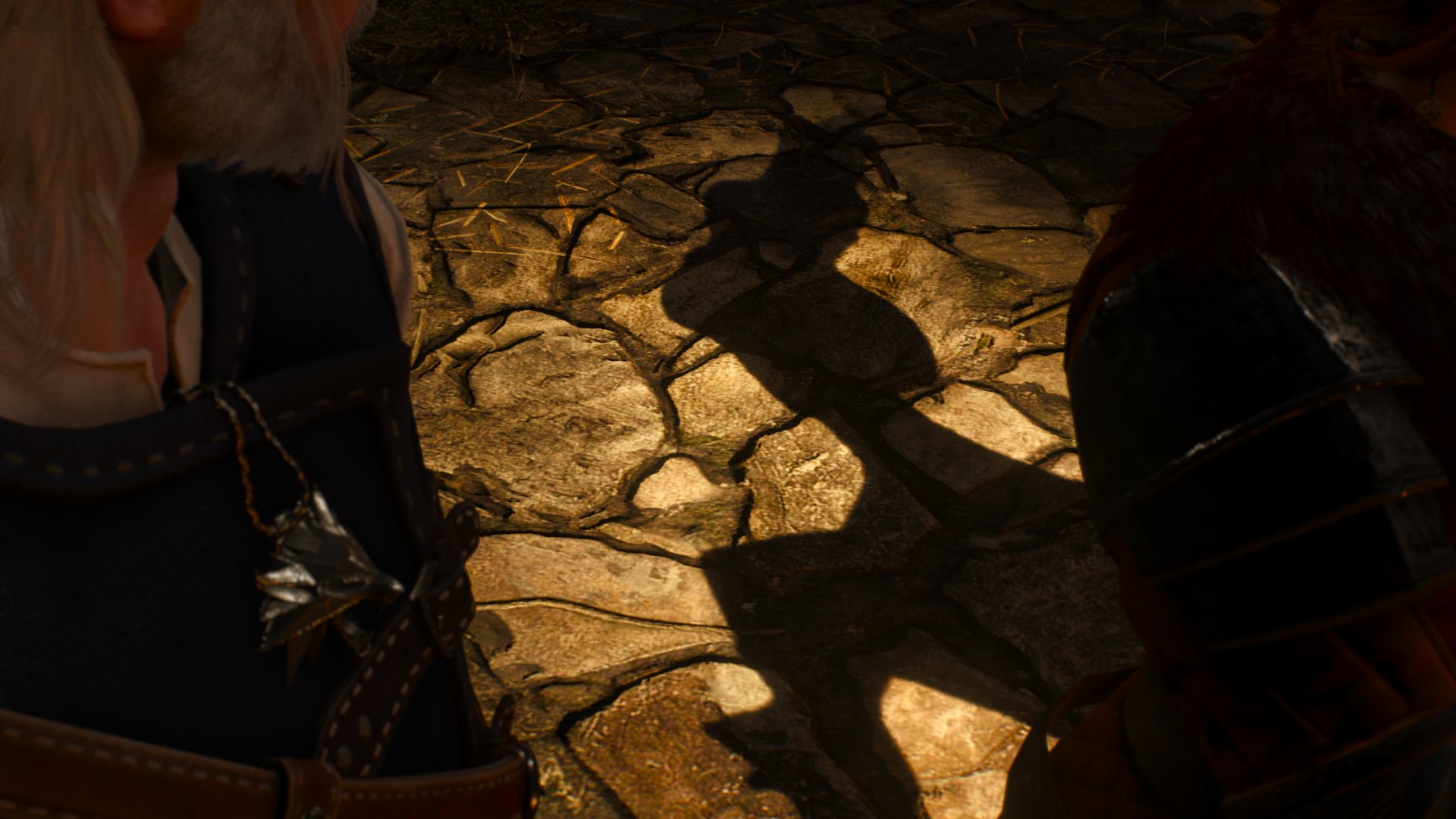 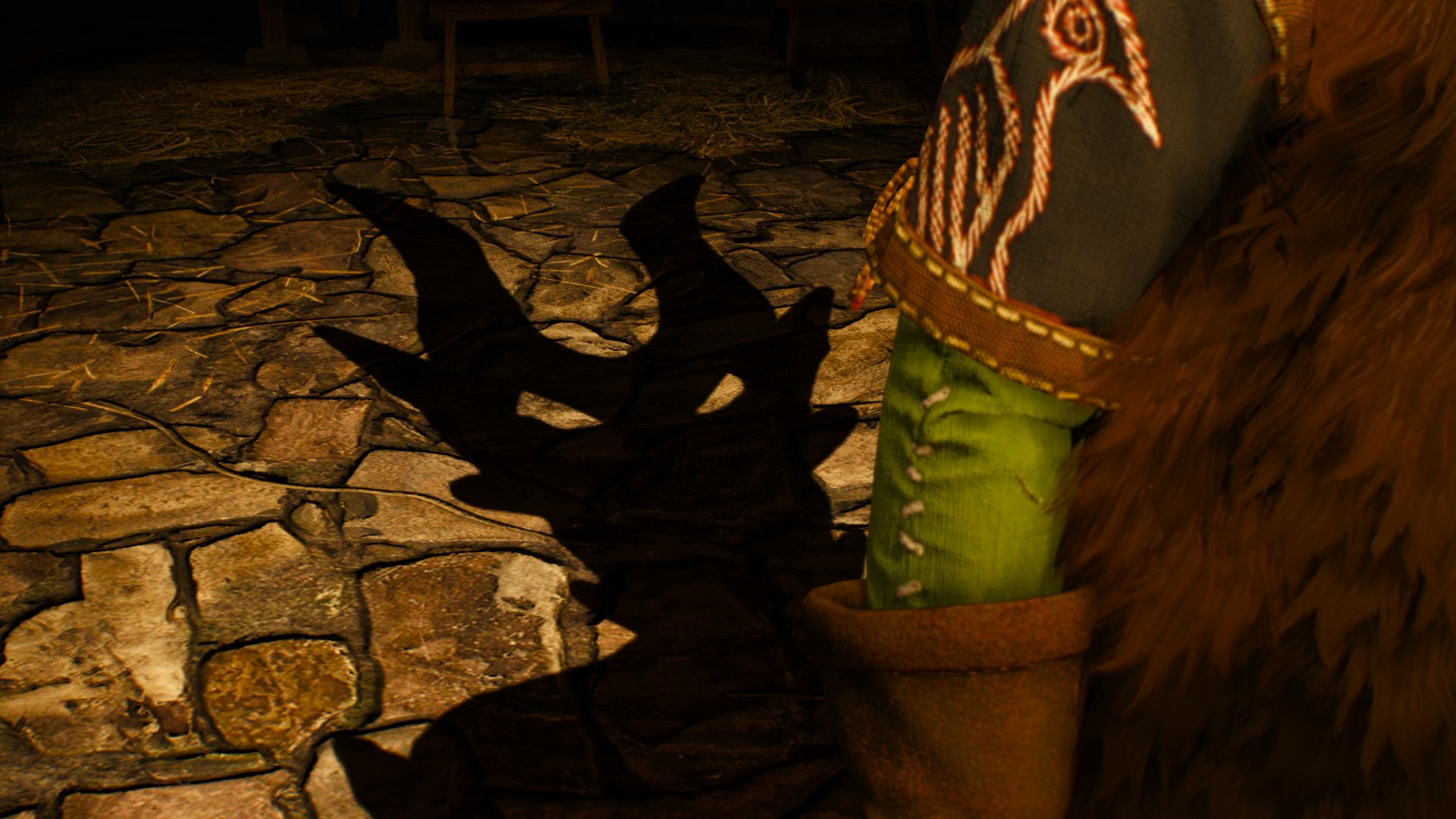 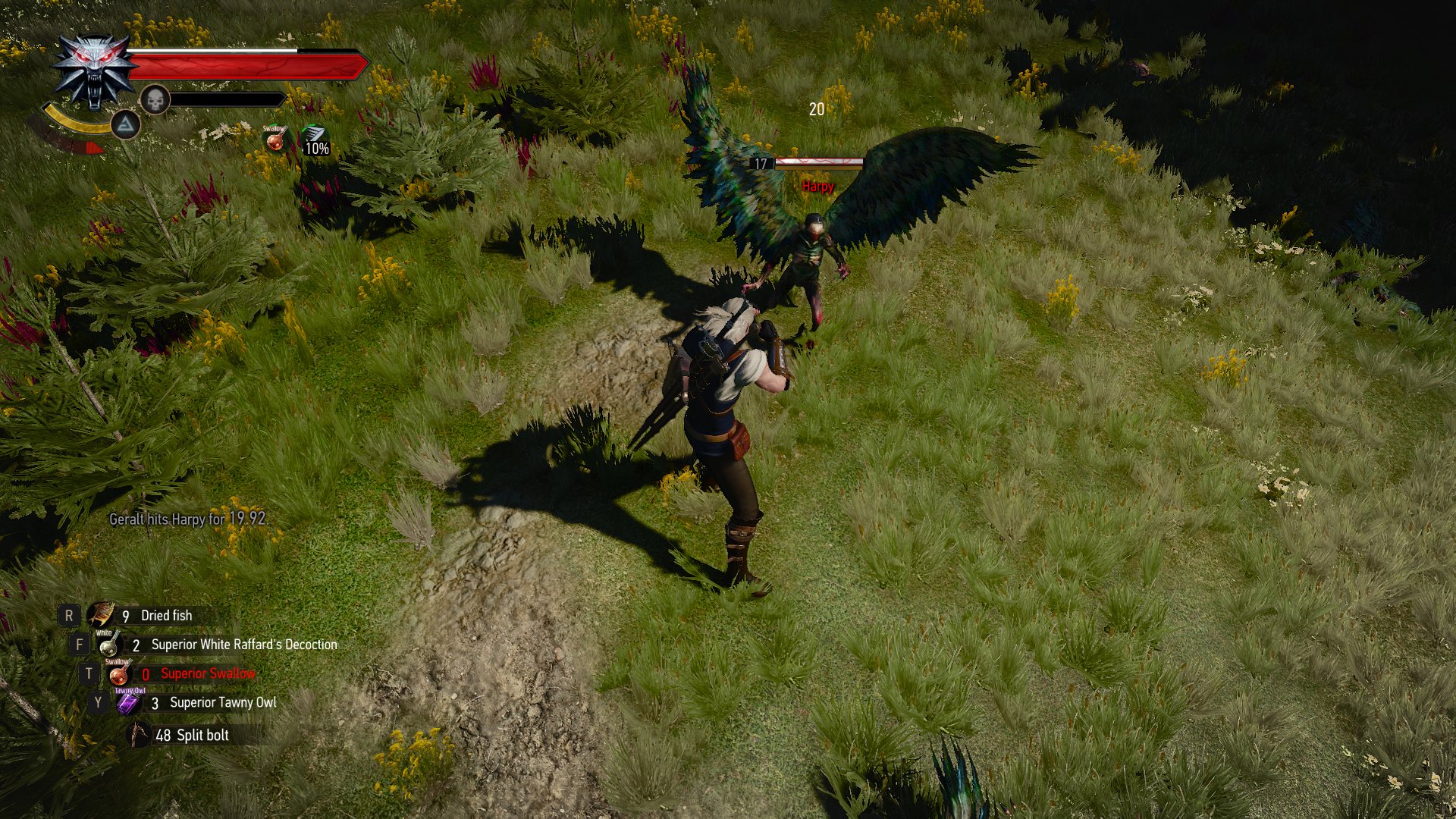 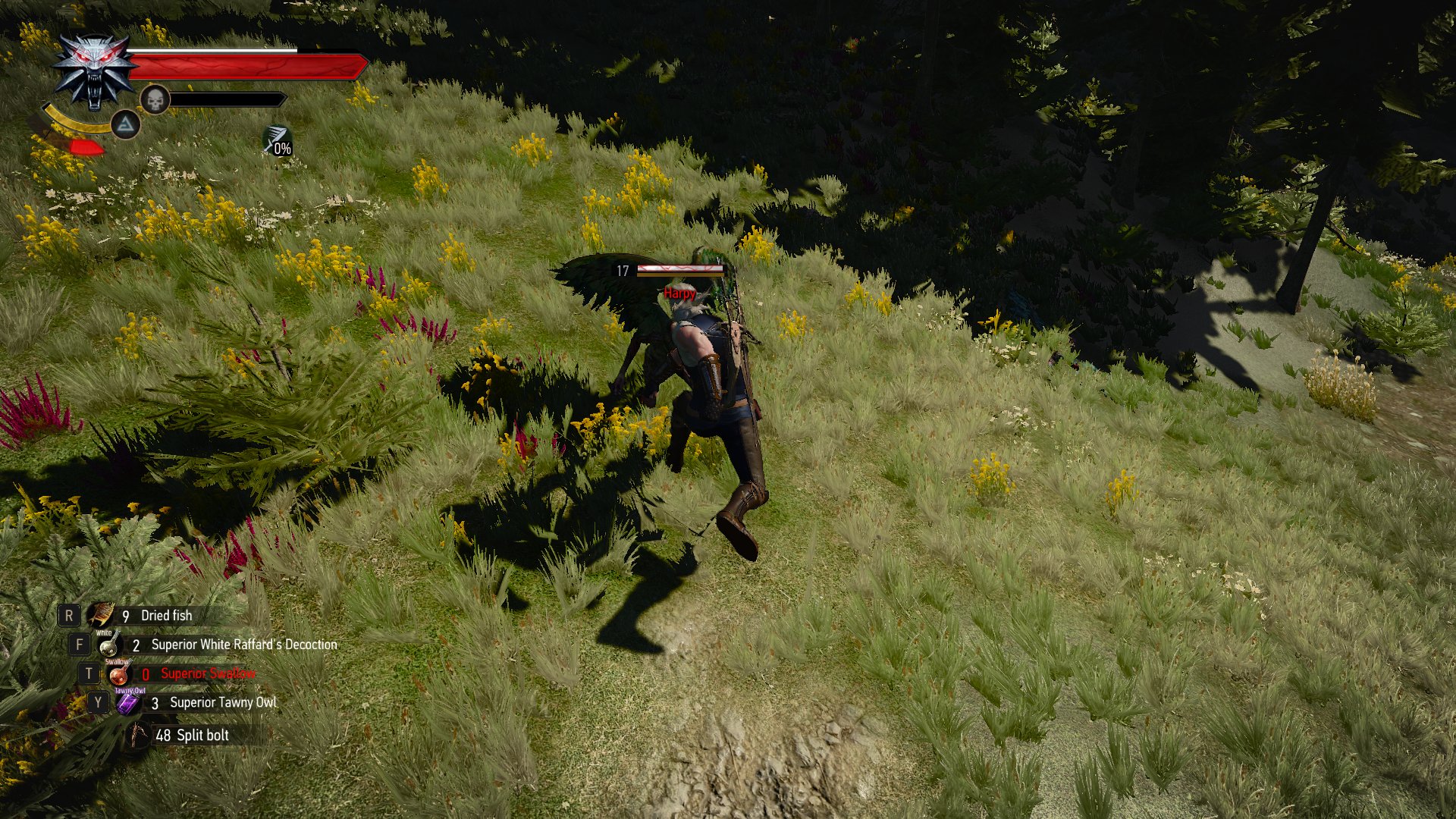 Yeah, I do that with bandits sometimes :) Doesn't work so well for monsters.
0 Likes 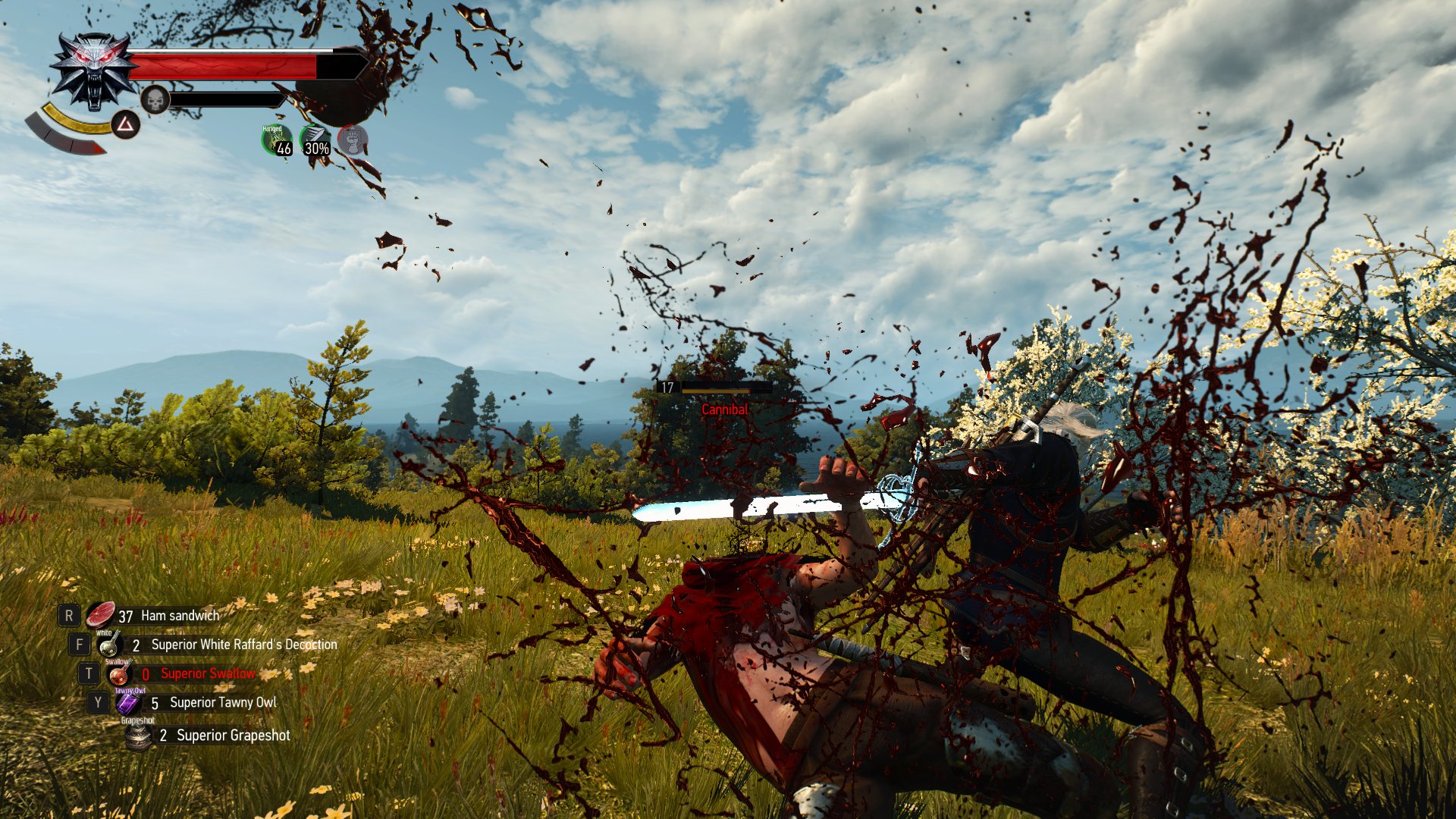 Geralt isn't somebody you should mess around with.
0 Likes

One of the best quests in the game: 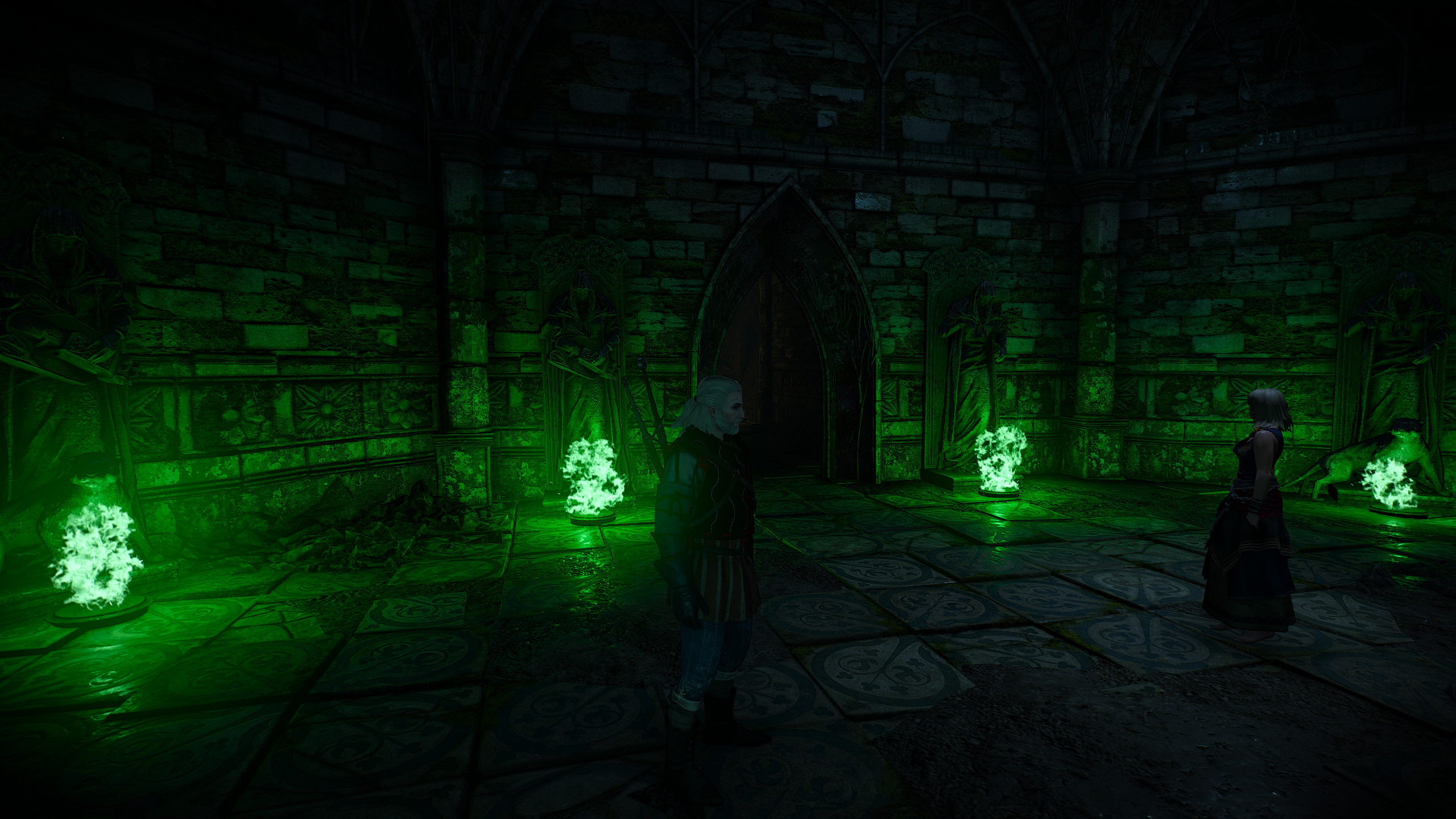 Yes! That quest is wonderful. Wish the game had more like that actually. Long and elaborate quests in large areas. Without breaking them up too much by going hither and tither (Skellige > Novigrad and suchlike).


This is -- hands down -- my favourite part of the game. Goosebumps practically all over the body again

None of the pictures I took does it justice, but here is one: 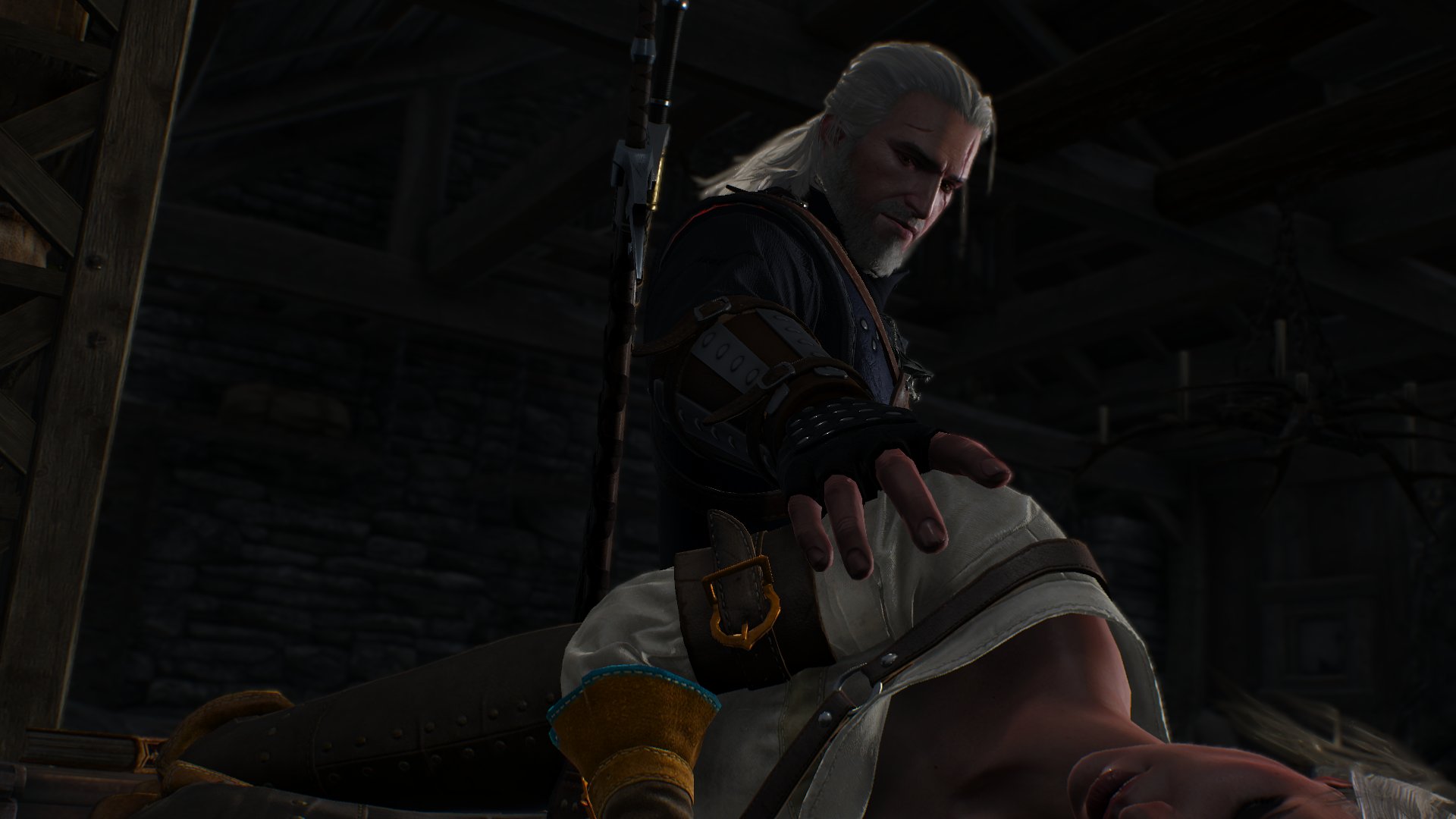 Even after all this time, playing through this part probably four or five times, I cannot experience this without getting emotional. Top notch by CDPR!
2 Likes, Who?

Not the foggiest idea what he says, but just for laughs really :D

(How do we embed videos here? The syntax looks weird and I don't see a video/YT tag)
1 Likes, Who?

Sorry for just posting the odd picture from my playthrough, but after struggling with this fight (using mods), this felt rather quite good :) 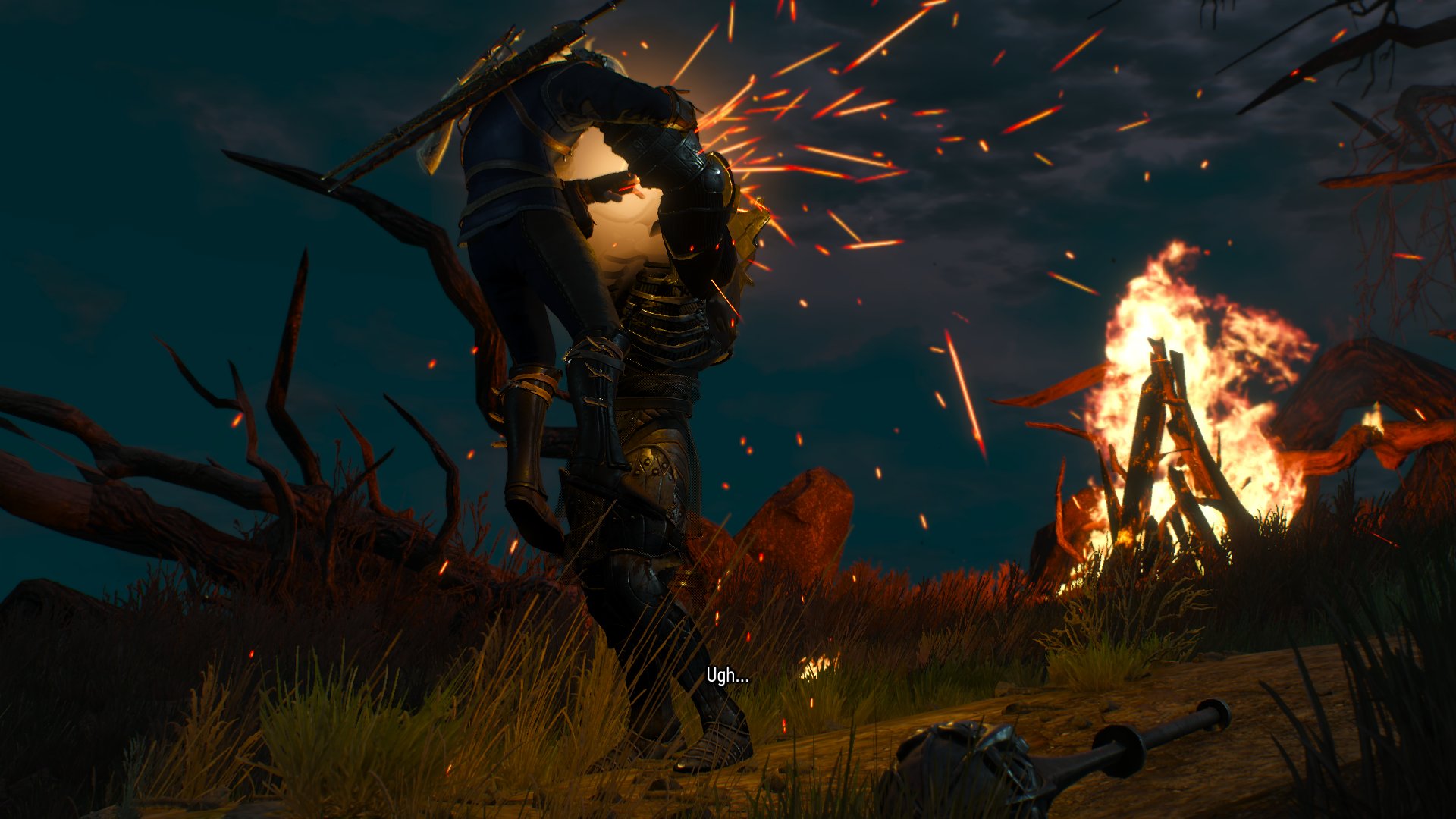 Only a sliver of health left too, so those last hits were proper "do or die" swings.
0 Likes

This is quite embarrassing, but still nice in a way... I've played the game over a 1000 hours, I'm sure of it. Already almost 200 hours in the current playthrough, and still not done with the main story. Yet... I did NOT know that this was possible 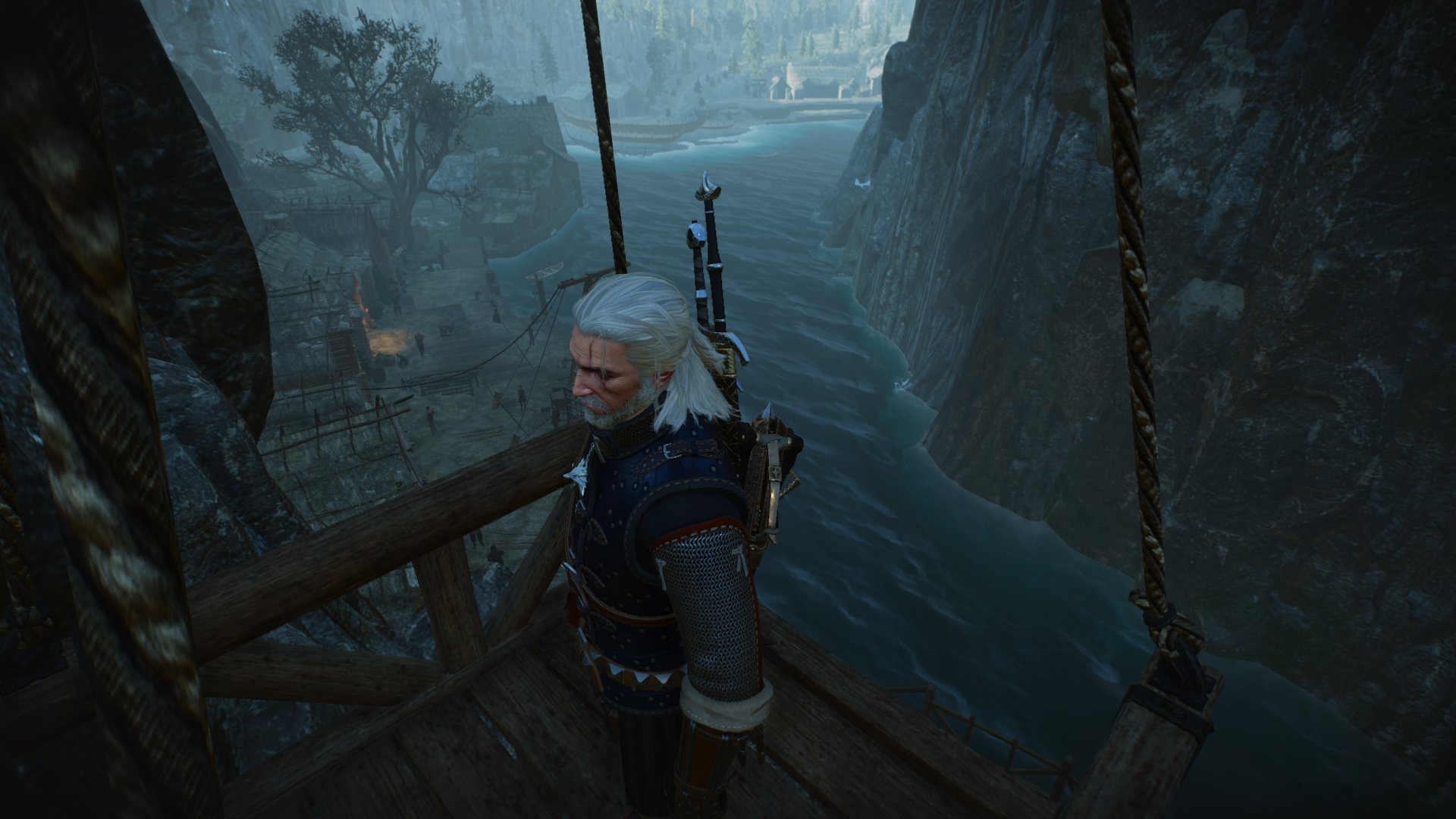 Ran over to some area I mustn't have been in before, and there was a switch. Odd, I thought, then hit it. "Hmm. Nothing seems to happen. Weird." Then I see that elevator thingy for packages comes down. I step on it, and suddenly notice a "Use" caption on screen. Hit it, and Geralt starts going up. When going down again, I noticed it wasn't possible to move at all while standing there. Cool. Absurd how I can discover new stuff in this game after 1000+ hours. 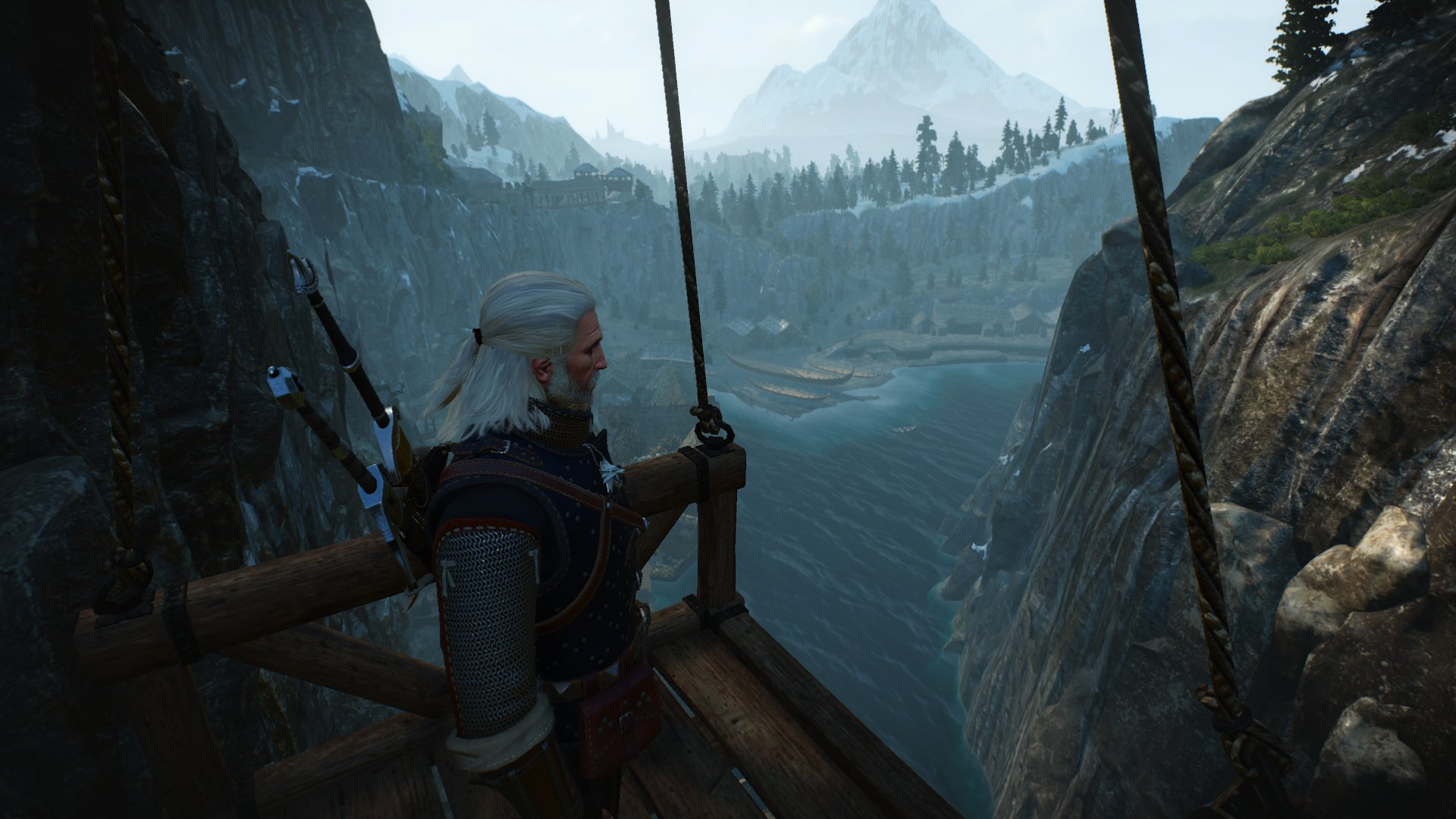