Liberapay or Buy us a Coffee. You can also buy games using our partner links for GOG and Humble Store.
Project Drift, my asteroid crafting/survival game (working title)

So I've had an asteroid mining game that I've wanted to make for many years, and I've finally been getting serious about working on it! 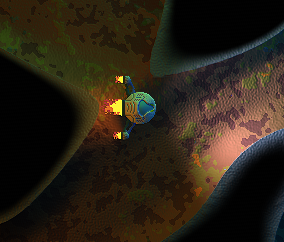 At it's heart it's a twin stick survival/crafting game set on an asteroid filled with an ecosystem of bio-mechanical creatures. Command your helper drones, build a home base, and escape! Networked co-op play is planned. Developed on Linux, but will also run on basically anything that supports SDL and either GL3 or Vulkan.

Lately, I've been working on locking down how the map in the game works. Generating distance fields for rendering, extracting collision data from it, and modifying everything in real time. A fitting end to the weekend was getting a half-baked implementation of the laser drill working.

The modicum of programmer art I have almost shows through the dynamic lighting, but I think it's starting to look pretty good anyway. :) I have more information (barerly hah!) on my blog if people are interested. https://slembcke.github.io/ProjectDrift

I'm not sure if the genre as such is my cup of tea, but man, that lasers is neat! The stuff you mention wanting to try out in the game sounds like such fun projects to dig into!

Thanks for sharing and good luck the with the project!
0 Likes

Progress! So I'm actually working on the game part time now which is great since working on big projects like this exclusively in free time can be... unreliable.

On that note, I've been refocusing on putting together pieces to try and make the early gameplay viable. If anyone is interested in giving it a spin I'd love some feedback.

Though be warned that this is a very early build and everything is still kinda half-baked. Everything is placeholder, no audio cues, and many missing visual cues. (a firm pat on the back if you can figure out the "cargo hatch" part of the tutorial without visuals for it

) Also of note, while I've been developing this on Linux, I've never looked into deploying Linux binaries... this might only run on recent Ubuntu-likes right now. Also of note: it does require SDL2 to be installed, and is basically unplayable without an SDL2 compatible gamepad.

Any feedback is welcome, though as I said basically everything is a placeholder. I only have AMD/Intel GPUs to test on which works fine in both GL3 and Vulkan. A Windows + Nvidia buddy of mine had crashes when using the Vulkan renderer, so I'd be interested to know if the `--vk` option works on Linux + Nvidia. It would be super helpful to get a stack trace or log if it happens. Getting that from Windows users is kinda fruitless. -_-
0 Likes
While you're here, please consider supporting GamingOnLinux on: