Blake Stone: Aliens of Gold and Blake Stone: Planet Strike, two classics from the 90s have been revived thanks to the BStone open source game engine that continue seeing big updates.

BStone adds in features like high resolution vanilla rendering, 3D-rendering,customizable controls and separate volume controls for sound effects and music. This is thanks to Apogee Software releasing the source code to Planet Strike in 2013.

Yesterday, build v1.2.0-beta.1 (and a quick fix with beta.2) went up and the major addition here is a new 3D renderer which uses OpenGL on the backend keeping it nicely Linux compatible. Plus, the developer also added some actual Linux instructions to the GitHub page now too. 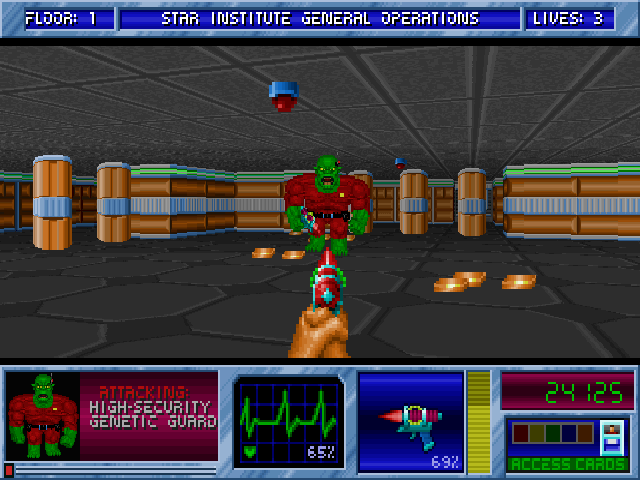 Also added in this release are menu options to control both video mode and texturing, with a new texture upscale filter (xBRZ). There's also a bunch of new options you can tweak to control things like widescreen mode, window position, anti-aliasing mode/strength and more.

You still need the data files to play either game, just like many other updated open source game engines. You can find each on GOG here: Blake Stone: Aliens of Gold and Blake Stone: Planet Strike.

See more about BStone on the GitHub page.

View PC info
Oh nice I've not used this source port really much at all yet outside of having it on my Vita, but glad to hear it's getting an OpenGL render back end. Good engine replacement from what I've seen out of it on my Vita, I'm going to have to give this a try later today.
0 Likes

View PC info
Geez. I've almost forgotten this gem. Thanks for reminding me!
0 Likes
aukondk 18 Mar, 2020
The upscaling works surprisingly well on these graphics. Wouldn't mind seeing it on a Wolf3D port (not sure which is the best these days)
1 Likes, Who?

ECWolf seems to be the go-to source Wolfenstein 3D port these days. It doesn't have OpenGL rendering though. It's all software rendering, which means it's slow at large resolutions like 1440p or 4K.
0 Likes

View PC info
I remember I had problems with the performance of BStone on Linux two years back. However, it runs like clockwork now! I like the addition of the upscale filter so you can choose between pixelated or a more updated look.
0 Likes

There's also a real good Wolf3d GZDoom Total Conversion. It's my preferred way of playing the game since it has the option to force Doom style movement, which prevents the game from causing me motion sickness.
0 Likes

nate 19 Mar, 2020
View PC info
Good to hear that they are making progress on this project. I tried it about a year ago and it ran great (other than a few crashes when loading saved games).
0 Likes
jrow 25 Feb
Nice. Glad to see someone pickup the work and port it.
When we wrote Blake I always wanted to port it to something other than a 16bit lang/OS and possibly put into a faux arcade machine.

Br, Jim R
2 Likes, Who?
While you're here, please consider supporting GamingOnLinux on: