As Half-Life: Alyx arrives today, just a reminder that it should hopefully be coming to Linux in a post-release update. On top of that, Counter-Strike: Global Offensive got some fancy cosmetics for it.

This is one of the biggest things Valve has done in a very long time, there's going to be a lot of eyes on them from everywhere. With Virtual Reality currently a niche market (just like Linux gaming…), it definitely will be interesting to see the reception to such a big series going into VR and only VR since it requires a headset. If it does well, I think it's safe to say Valve will be doing more.

"Half-Life: Alyx represents the culmination of Valve's technological advancement over the past few years," says Valve founder Gabe Newell. "We have built SteamVR, our game engine, our tools, and VR hardware specifically to enable us to ship the best content we know how to create. Today, as we ship Alyx remotely from our homes, we are hoping that everyone stays safe and has a great time playing the game. Please let us know what you think."

If you do own a VR kit and plan to play Half-Life: Alyx, please do note in the comments your experiences with it, I've no doubt plenty of people will be watching and wanting to know.

Once Valve communicate when they expect a Linux build and Vulkan support to land for Half-Life: Alyx, we will let you know.

For the Counter-Strike: Global Offensive cosmetics, Valve added in an Alyx themed Collectible Pins Capsule, Sticker Capsule, and Patch Pack for those of you who love to collect items. If you pre-purchased the Valve Index, you should also now have an exclusive Music Kit and a complimentary Genuine Alyx Pin.

You can see an example of what to expect below: 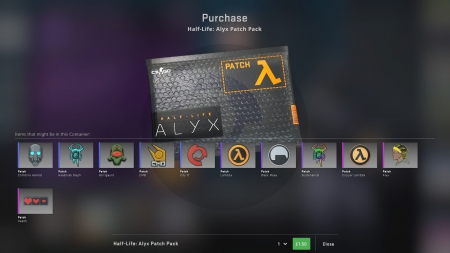 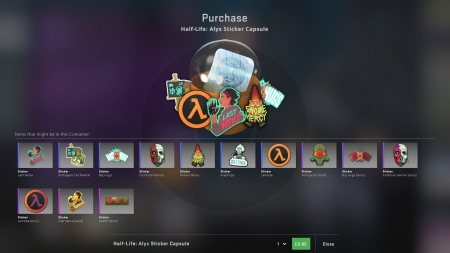 Article taken from GamingOnLinux.com.
Tags: FPS, Steam, Virtual Reality | Apps: Counter-Strike: Global Offensive, Half-Life: Alyx
11 Likes, Who?
We do often include affiliate links to earn us some pennies. We are currently affiliated with GOG and Humble Store. See more here.
About the author - Liam Dawe

View PC info
Very cool Valve created a dedicated page for gamers who want to showcase Half Life: Alyx. Be it on stream or on the monitor or TV:

I'm not bold though planning a stream though, there can go so much wrong on Linux still :D
Just lately suddenly Beat Saber didn't start anymore. No logs got created, nothing. Turned out that opting out of SteamVR beta helped, though beta and stable were the same version ¯\_(ツ)_/¯
Maybe it was releated to this github issue, maybe not.
3 Likes, Who?

Zappor 23 Mar, 2020
View PC info
So if I understand correctly the Windows version doesn't have Vulkan initially either...?
0 Likes

Spyker 23 Mar, 2020
I can't wait to play this game... Unfortunately my Valve Index is still weeks away from shipping (I guess covid-19 is not helping), and I probably won't be able to play it before next month. I'll have to dodge the spoilers until then.
1 Likes, Who?

Quoting: ZapporSo if I understand correctly the Windows version doesn't have Vulkan initially either...?

View PC info
I'm downloading it right now, it's supposed to unlock in approx. 6 hours. I'm not expecting much, unfortunately, my computer does not meet minimum requirements. I'll try it out for sure, though.
0 Likes

I just hope they won't be doing more. I'm one of these people who can't play in VR, as soon as there is fast movement I'm doomed to puke my guts and to get a serious headache. ( Still puking on the latest Oculus Rift )

Plus, I hate having a big block of plastic glued to my face, I'm playing in my couch to relax generally after a day at work.

So I'm pissed to be locked out of a serie that I love since the first episode.

Don't get me wrong, I'm all for progress and change but not when it's not for everyone.
1 Likes, Who?

Spyker 23 Mar, 2020
I think it's best if they can do both a VR and a non VR game (not the same one). But they should keep doing some VR games, because the VR gear is expensive, and we also need more games to justify its purchase.
1 Likes, Who?
Swiftpaw 23 Mar, 2020

View PC info
If anyone needed any more proof that Valve cares about pushing Windows more than Linux, here you go. I thought they'd at least have Linux releasing at the same time, if not releasing Linux first to help promote Linux gaming.

Linux takes the back seat yet again. But as always, at least it's coming. Eventually. Hopefully.
0 Likes
kuhpunkt 23 Mar, 2020

Quoting: SwiftpawIf anyone needed any more proof that Valve cares about pushing Windows more than Linux, here you go. I thought they'd at least have Linux releasing at the same time, if not releasing Linux first to help promote Linux gaming.

Linux takes the back seat yet again. But as always, at least it's coming. Eventually. Hopefully.

You seriously say this... dude. Valve doesn't need to push Windows in the slightest. Valve does more for Linux than anybody else. VR on Linux is still a niche in a niche.

View PC info
Added in quote from Gabe about Alyx now it's out.
0 Likes
1/3»
While you're here, please consider supporting GamingOnLinux on: