Odds and ends, the Linux and gaming Sunday Section

Almost time to begin another week full of news, before we do let's run over a few interesting happenings recently.

Let's start with two bits of recent news about Godot Engine, the free and open source game engine. The 3.2 release cycle is going strong, with a second alpha release now available. A massive list of new features and improvements coming to Godot 3.2 can be found here. What's even more exciting though is the Vulkan work coming with Godot Engine 4.0, with another short progress report post up for it. The new visual frame profiler coming certainly looks useful to help developers squeeze out some more performance.

More AMD news for you, as it has been reported by Wccftech that AMD now command around 30%+ market share of the CPU market. That's some very impressive growth, pushed forward by the Zen microarchitecture from 2017. As seen in the graph below from cpubenchmark.net, this is the highest they've seen it since 2007. 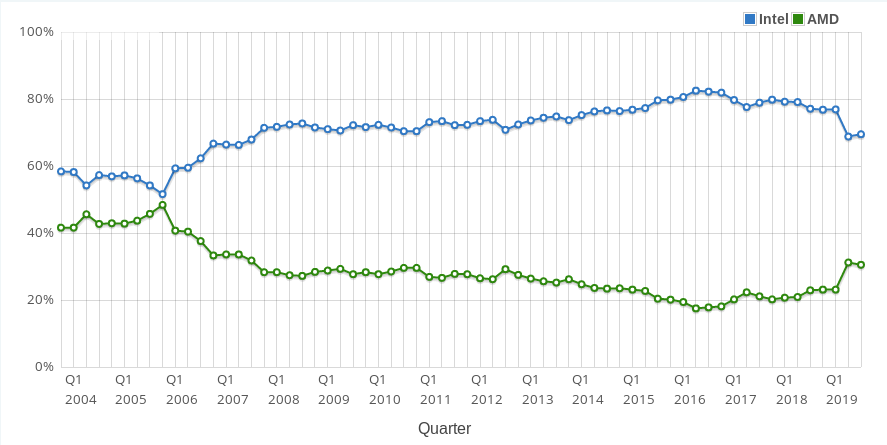 One game update we missed recently was with the brilliant turn-based tactics game Fell Seal: Arbiter's Mark, it just had a big upgrade with a New Game+ mode. Additionally they're working on what's sounding like a rather large DLC to include a bunch of new maps, monsters to fight and more they're not talking about yet. You can find Fell Seal on Humble Store and GOG as well as Steam.

Valve news now as they pushed out another Steam Beta Client update recently, with the Home and Collections buttons making a comeback (hooray). On your Library home, the Recent Games and Recent Friend Activity are now shelves you can move around or remove completely. Something I am particularly happy about, is a new option to stop the Community Content (screenshots and so on from the Steam community) on game pages loading automatically. To me, it's useless fluff that slows down loading so I now have that thankfully turned off.

For Steam's Remote Play Anywhere (streaming from your PC to other devices), Valve said it now runs over the "Steam Datagram Relay network" to make sure you get the best possible route at all times. I assume this is also work that will be used for Remote Play Together coming in a later beta. Additionally, Steam Input now has support for Power-A Fusion Xbox/Playstation 4/Switch Pro fight pads.

This ScummVM release also added Text-to-Speech support on Linux and the ability to sync your saves to cloud-based file hosts which is incredibly handy.

Free game alert: Princess Remedy 2: In A Heap of Trouble, developed by Ludosity is currently 100% off (free to keep) on Steam until October 15th.

A fun email entering the GamingOnLinux inbox recently was a tip about the open source Robot War Engine, another project to create an open source game engine for the classic and brilliant RTS game Total Annihilation. While we already have Spring RTS, it has a very different feel to classic TA which RWE is aiming to stick a lot more closer to. Just recently the developer of RWE mentioned that the launcher now has Linux support.

Hope you all had a wonderful weekend, mine has been full of rest to be ready for another full week of GamingOnLinux news.

This article was sponsored by…just kidding. If you wish to support GamingOnLinux you can do so across places like Patreon, Paypal, Liberapay, Flattr and Twitch. In addition to our affiliate links with GOG and Humble Store.

Article taken from GamingOnLinux.com.
Tags: Misc, Round-up
16 Likes, Who?
We do often include affiliate links to earn us some pennies. We are currently affiliated with GOG and Humble Store. See more here.
About the author - Liam Dawe

View PC info
Ray tracing is really a marketing red herring at this point. Not something that's worth a huge premium tag Nvidia puts on their cards because of dedicated ASICs for it, and at this point not worth the GPU die space used on those ASICs at the cost of less general purpose GPU compute units.

Regarding trends, while AMD is marching in CPU department, in GPUs, Linux has its own situation that differs from Windows. Windows users for the most part prefer Nvidia, but on Linux situation is starting to tilt towards AMD. Though so far it doesn't look accelerating to me. The trend is more or less constant: 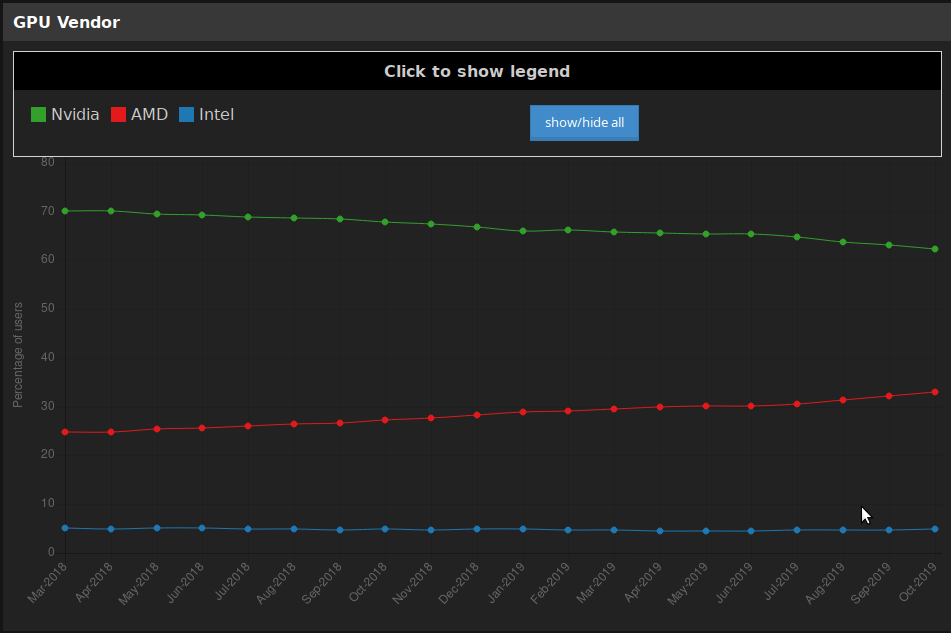 Quoting: ShmerlRay tracing is really a marketing red herring at this point. Not something that's worth a huge premium tag Nvidia puts on their cards because of dedicated ASICs for it, and at this point not worth the GPU die space used on those ASICs at the cost of less general purpose GPU compute units.

You're definitely doing the concept of raytracing short here. It could have massive benefits in lifting the shortcomings of current engines when used properly. Which is not necessarily a fully raytraced game, but enabling it for lighting/shadows. This can be done with normal compute as well. RTX would just be an accelerated version of it.
1 Likes, Who?

View PC info
Ray tracing itself is a good concept. I'm skeptical about wasting space on the GPU die on ray tracing ASICs however. It comes at the cost of having less other GPU compute units. I.e. you get weaker GPU with ray tracing, that's not even really that good, since good ray tracing requires much more powerful hardware anyway.

Question is, is it worth the trade off? I'm not sure it is. If you really need ray tracing, you'd better come up with another device in addition to GPU, instead of cramming it all into GPU itself.

View PC info
Not sure we have a choice. In the end, it always comes down to cost. I remember dedicated Phys-X cards... does anyone else? That's how well that went.
1 Likes, Who?

Quoting: dpanterNot sure we have a choice. In the end, it always comes down to cost. I remember dedicated Phys-X cards... does anyone else?

Quoting: PatolaJust like the GPU can do OpenCL for computations other than graphics, the matrices multiplication of RT units can be used to other stuff too, like the deep learning of DLSS... you can use NVIDIA's Optix in Blender to get the Cycles renderer to render your videos much faster.

I thought Nvidia said the RT cores are specifically for ray tracing, and Tensor cores are for deep learning stuff. OptiX seems to utilize both.
1 Likes, Who?
While you're here, please consider supporting GamingOnLinux on: