Liberapay or Buy us a Coffee. You can also buy games using our partner links for GOG and Humble Store.
Latest Comments by Smoke39
Seems that the Linux version of Supraland will not be heading to GOG (updated)
10 July 2019 at 8:39 am UTC


Quoting: TheSHEEEPI'm all for Steam adding a simple "Download as installer/archive" button or something along those lines to DRM-free games in their store

Is that not what this does? 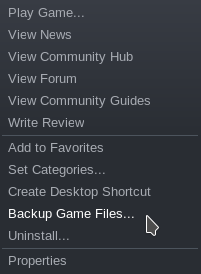 
Quoting: timgarbosDeveloper here. Totally get your concerns, but we are not trying to keep anything secret. Of course, we care about our backers and that's why we tell them the news before the general public. The news will be more public and is already publicly being discussed on our Discord.

You kept this Epic exclusivity decision secret until it was already made, didn't you? You can't really tout your transparency in the wake of a totally opaque decision process.
View this comment - View article - View full comments
Info on Google Stadia from today’s Stadia Connect, Baldur’s Gate III announced too
7 June 2019 at 9:17 am UTC Likes: 2


Quoting: hardpenguinI think it is also unfair to keep repeating how not having access to the game files is a drawback. What about the upsides of this solution? There is no download and installation time, you can seamlessly switch between devices without stopping the gaming session and you do not have to own a gaming PC or a gaming console that is capable of running the game. And one more for us, Linux fans - you do not have to deal with the Windows 10 bullshit :)

But... it is a drawback, and not even a necessary one to have those benefits. Stadia is basically Steam Link, except Google provides their own host hardware and arbitrarily denies the option to run the games yourself. Stadia could be a regular ol' game store with streaming as an extra feature, and if anything Google would save money because anyone playing locally wouldn't be using their hardware or network infrastructure. The only way disallowing local execution makes sense is with a Netflix-style buffet subscription, but that's not what this is.
View this comment - View article - View full comments
Easy Anti-Cheat are apparently "pausing" their Linux support, which could be a big problem (updated)
6 May 2019 at 9:17 pm UTC

How? The analogy is still absurd. He's still arguing in favor of trying to wrangle a monster into granting you some scraps of freedom in favor of simply using an OS that is inherently free. The "fight for the freedoms we have" bit seems to indicate just how much he takes Windows for granted, and a catastrophic incomprehension of the value of FOSS. I don't see how what he said could be interpreted as anything other than dismissive and ignorant.
View this comment - View article - View full comments
Easy Anti-Cheat are apparently "pausing" their Linux support, which could be a big problem (updated)
5 May 2019 at 8:53 pm UTC Likes: 9

Quoting: liamdaweYou're misinterpreting my intentions. I did not deliberately try to stir anything up, stop acting like I am. It is interesting and on-point that Epic Games acquired them. Not long after, we now find this out. It wouldn't be out of the realm of possibility to say they're related, in fact I still think it's quite possible hence me mentioning it.

If you honestly, truly believe that this conspiracy theory is not only possible, but probable, then I've seriously misjudged you. Oh well...

Just a few posts ago you were pointing out that the Epic Store not being on Linux was more likely a logistical business decision rather than a malicious one. Why, then, is the suggestion that they made a similar business decision about EAC a farfetched "conspiracy theory"?
View this comment - View article - View full comments
Psyonix, creator of Rocket League is joining Epic Games (updated)
1 May 2019 at 9:42 pm UTC


Quoting: AnanaceI imagine that their "100% reliable NAT traversal" is just them hosting a series of TURN servers on their impressive infrastructure.
Since it also provides DDoS protection, and hiding of IP addresses, that would make a whole lot of sense actually.

It would also easily explain why the service in question would be limited to Steam's services.

For the people who are less aware, TURN servers are basically just echo nodes, to which you and the other part both connect and which then just echo the traffic between your connections. This is a 100% reliable way to bypass every single NAT, as it is just like any other connection to a server, which then facilitates peer-to-peer data transfer through it.

That's what it sounds like:
https://github.com/ValveSoftware/GameNetworkingSockets#why-do-i-see-steam-everywhere
https://github.com/ValveSoftware/GameNetworkingSockets#nat-piercing-icestunturn
It also sounds like they're planning to let you use the same API as the steamworks version, but with your own servers in the future. Until then, it doesn't sound to me like anything prevents you from rolling your own solution.
View this comment - View article - View full comments
WRATH: Aeon of Ruin is the new FPS from 3D Realms, coming to Linux this Summer
8 March 2019 at 12:15 am UTC Likes: 5

Quoting: BotonoskiI don't think I actually have many nostalgic memories attached to any of those things really.

Having lived and gamed in that era and played those games, I have nice memories, but no nostalgia for them at all. I find this whole pixel art and retro gaming phenomenon completely baffling. I spent that era wishing we had the graphics, services, and gameplay that we now enjoy today. So, I guess I'm living for the gaming momemt...

I really dislike how many 3D games look these days. Harsh lighting and shadows, annoying post-processing effects, environmental detail devolving into visual noise that's hard to parse. Earlier 3D games were primitive, but a lot easier on the eyes imo.

Dusk I feel used its retro aesthetic a bit as a crutch (which I can forgive from a small indie dev), but with Ion Maiden and it looks like with Wrath, too, I think 3D Realms has struck an excellent balance between old-school aesthetic and fidelity. It's said that art is as much about what you leave out as what you put in, and with games like these I feel like artists are actually free to do that - picking and choosing which details are important and which are not - whereas old games were limited by technology, and modern AAA games are blindly obsessed with similar visions of cinematic photorealism.
View this comment - View article - View full comments
Looks like Easy Anti-Cheat strikes again with Steam Play, Paladins is no longer playable on Linux
9 February 2019 at 8:35 pm UTC Likes: 1


Quoting: Alm888Who cares about yet another Windows game not running on Linux? As if it is the only one…

By now we are basically swimming in good native games, so why bother spending your time on some Windows title which developers don't even care about Linux?

What hero shooters are there with native Linux support?
View this comment - View article - View full comments
DUSK, the popular retro-inspired FPS now has a Linux testing build up, out for everyone next week
3 February 2019 at 9:19 pm UTC Likes: 4

Their Post Release Roadmap lists "DRM Free versions" right at the top on the same line as Mac/Linux, so maybe it won't actually be too long?